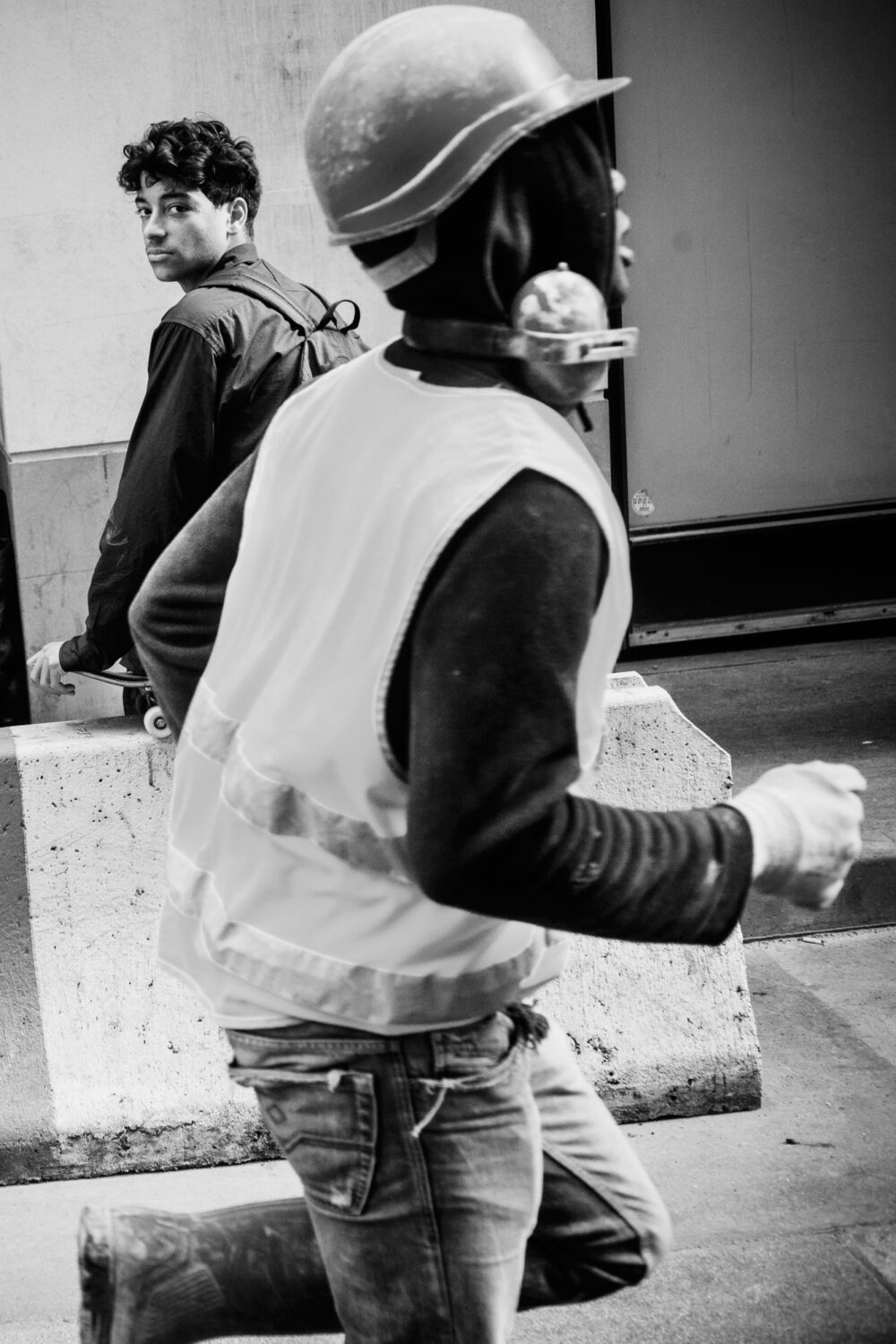 Where in Brazil did you grow up?
I was born in the north, in a place called Maranguape. It’s really close to Fortaleza, which is a big city. I lived there with my family – with my grandparents and cousins all in one house – until I was six, when my mum wanted me to move to Norway with her and my new stepdad. That’s when I first came to Norway.

Do you have strong memories from Brazil?
Yes, lots actually. Sometimes it’s easier to remember living in Brazil than when I first got to Norway.

Do you visit Brazil regularly?
Yes. I used to stay with my family a lot – I have a big family – so I’d hang out with all my cousins. I’ve also met some new friends there since moving away, some skaters. I’ve got a few in my hometown.

The move to Norway must have been quite a culture shock. What do you remember about this change?
There was such a big contrast. I was confused in the beginning because all I knew was my hometown in Brazil. When I got to Norway the weather was really cold, the opposite to Brazil. I didn’t want to wear jackets and beanies – I was stubborn – but after a while it was way too cold. When it started snowing, I had to give up. I got a puffa jacket!

I guess you had to learn the language quite quickly.
Yes. My Norwegian is kind of fucked, because when I first got to Norway when I was six, I went to this kindergarten to learn the language. That didn’t work out that well because they were just little kids, you know? So I watched a lot of cartoons and they talk a certain way. Some of my words are from TV. 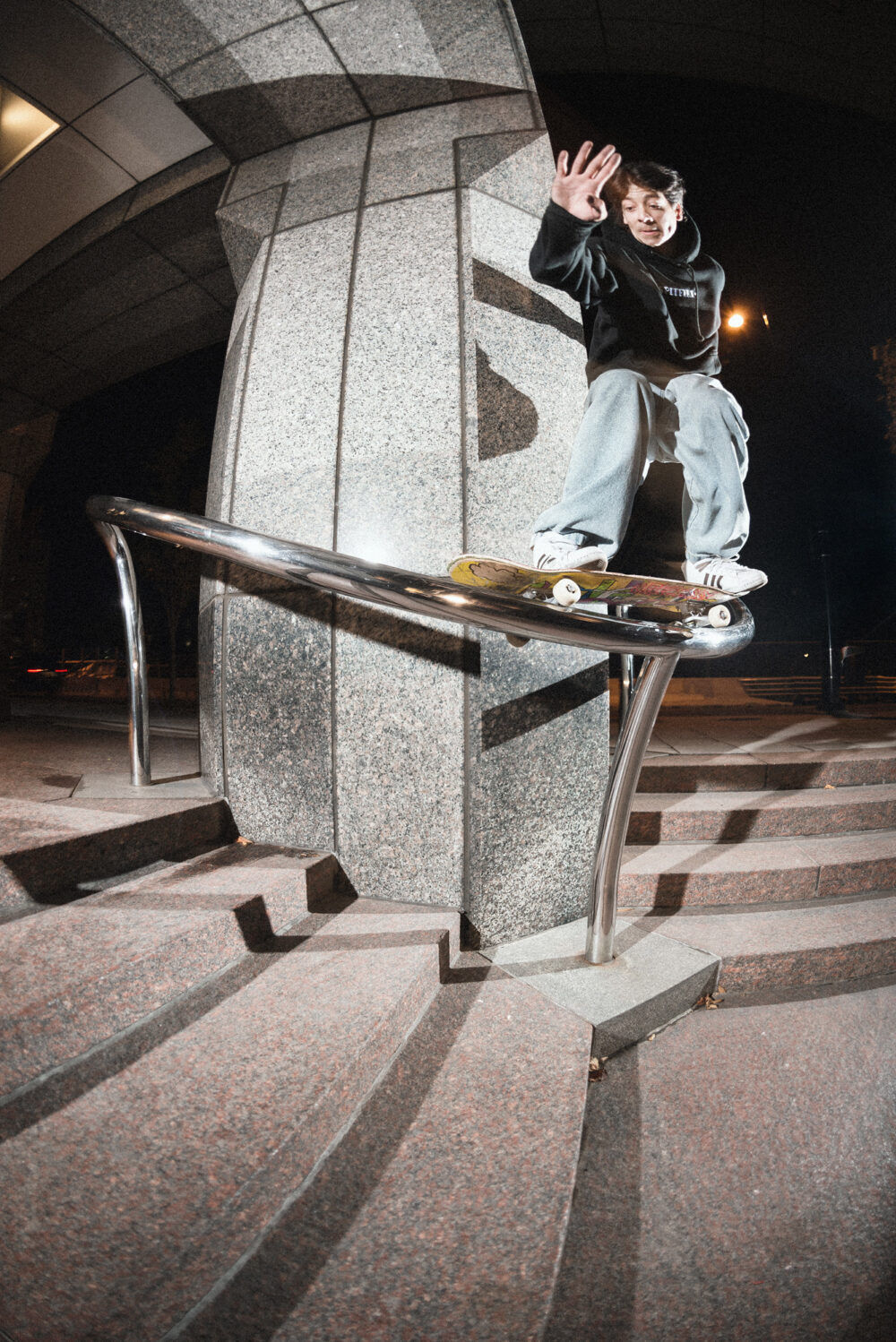 Tell us about your hometown in Norway, Haugesund.
It’s a little town in the west, three hours from Bergen. There’s not much to do there. I have a lot of friends and family there, so I go and visit, but when I was 16 I decided to move to Malmö. Haugesund is not very good for skating. It has crews, people that keep it going, which is sick, but when I went to Malmö there were so many skaters.

Are there many spots there?
There are spots, but in a small town you get sick of them.

Didn’t you grow up quite close to Gustav Tonnesen?
Yes. I’ve been to Stavanger (Gustav’s hometown) once or twice. It’s pretty close, but I rarely saw him because he was always travelling. I’ve met him more times in Barcelona than in Norway.

You went to school at the Bryggeriets Gymnasium in Malmö, Sweden. What made you choose to study there?
A couple of years before I went, they made this mini documentary about the school. I got to know about it that way. I asked my mum and dad but they said no at first. Then I met some other kids who were going there and my parents spoke to them and all of a sudden it was cool.

So they came round.
I guess they saw it as me travelling and going to a new place. I don’t know, I wasn’t big on school, so I guess they thought it would be better for me to go there because it would be interesting for me. I’m not sure if I would have graduated if I went to a regular school. When you choose Bryggeriets Gymnasium, were you already planning a career in skating?
It was something I wanted to do, but not really a plan. It kind of fell into place later.

Do you feel you missed anything you would have experienced at
a more traditional school?
Yes, a few things. In Norway they have this thing called russefeiring, it’s this time when people party all the time. I guess everyone does that during the last year of high school, but Norwegians are pretty crazy with that shit – it’s like this huge tradition. But I don’t think I missed out on that much because we were 16-year-olds living alone in a foreign country. It was the best shit that could ever have happened to us.

I remember first arriving in Malmö. I got to my friend’s apartment with my bags and all the guys were there. I met all those Malmö locals – Oski (Oskar Rozenberg Hallberg), Nando (Fernando Bramsmark), Tao (Tor Ström)…
I’m so happy I went to the school. I heard there are lots of Norwegians there. I think there were 15 in my class.

I heard a theory recently that Norwegians are the most ambitious and competitive of the Scandinavians.
Yes, maybe that is true. There are so many good skaters from Norway.

Do you see that reflected at the school?
Not in any crazy way. Some are more driven than others of course. 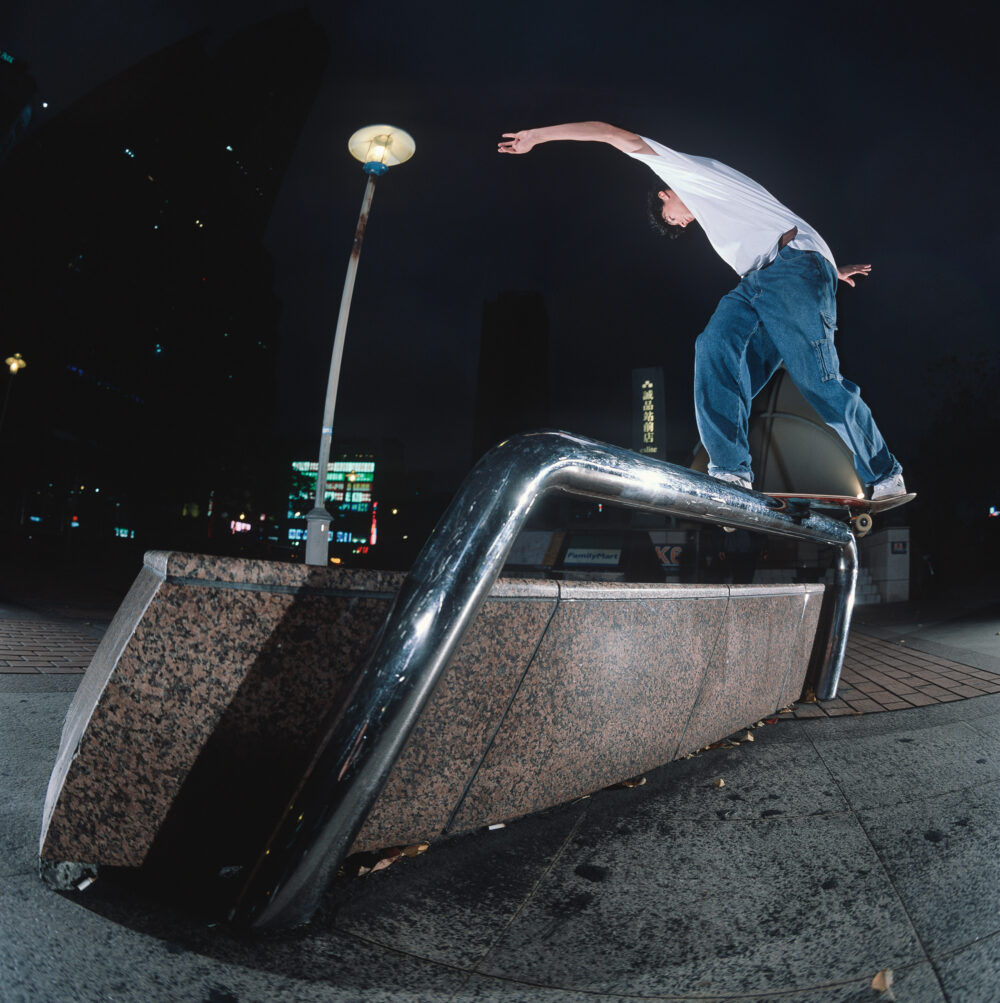 You got sponsored by adidas while you were still studying. How was it balancing school and going on trips?
Sometimes they would understand that it would be sick for me to go on a particular trip and let me go, but then I’d have to go into school earlier and make up some time. You have to have enough hours.

Who are some of your favourite Bryggeriets Gymnasium alumni?
Man, there are so many good ones. I like Oski. His skating is so sick.

I spoke to John (Dahlquist) from the school and he told me your class was one of the strongest ever.
Yes, it was crazy.

Do you think being around that level of talent pushed everyone even further?
Yes, definitely. I knew a lot of them before, actually, from contests or street skating in different cities. I had good friends already when I started.
We skated a lot. It was exciting being in a new city, you know?

How do you like Malmö as a city?
It was very grey and windy. In the winter it can be quite depressing – you never see the sun, it’s too cold – but in the summer it’s so beautiful. You can swim in the sea. I got used to it pretty quickly actually because the older classes showed us around the city. That was very nice. 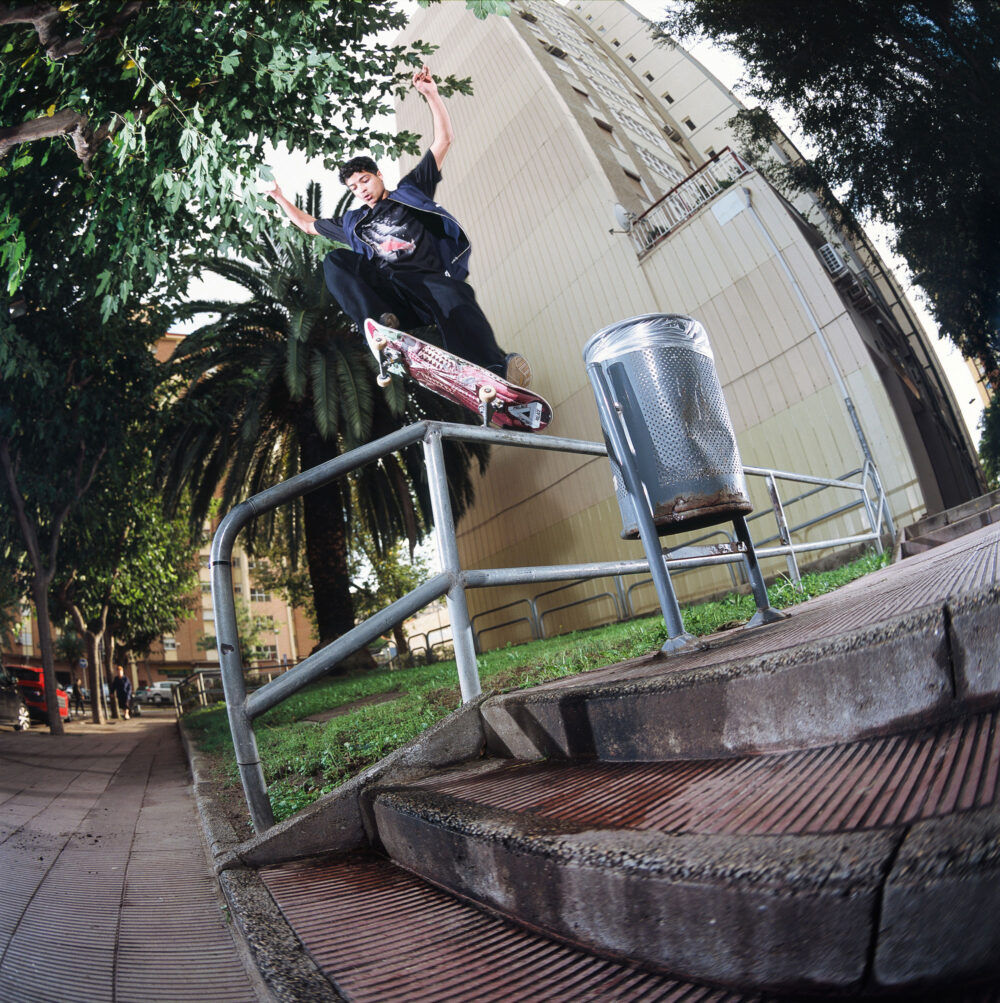 After you graduated you moved to Copenhagen, just across
the water.
Yes that’s right, I moved there maybe two or three months ago.

What made you choose to move to Copenhagen?
After school finished, I wasn’t really feeling going back to my hometown. I had been back a couple of times and it just felt quite small and you can’t really skate. I mean you can, but there isn’t the same energy. I have a lot of friends in Copenhagen who are skating. There are good spots…

How has it been living there the past few months?
It’s been very nice. I’ve been hanging out with Hugo (Boserup), Tao and Ville (Wester) a lot, and a whole bunch of other guys.

Palace recently announced you and Kyle Wilson as new riders. How did that come about?
Good question (laughs). We were shooting for this Campus ADV thing in Paris and I met Chewy (Cannon) and Blondey (McCoy). Blondey was just there for one day because he had to do something, but I was hanging
out with Chewy and skating and I guess maybe he talked with (Danny) Brady. Also I bought this Palace top once and I did this little clip on Instagram. Brady saw it and messaged me saying: “Nice top, do you want
a box?” I don’t know, it happened really quickly. So you were a fan anyway.
Yes I always liked Palace. I never really thought I would get an opportunity to ride for them. It was unexpected. I was getting some boards from Krooked before, but it’s an American brand. I like Krooked and I have respect for it, but I’m super stoked on Palace.

It’s a special opportunity. Lots of people want to ride for Palace.
Yes and they have all these sick skaters on the team who I’ve been watching for years. It’s sick to be a part of this.

Palace took you to Detroit earlier this year. How was
that experience?
It was so sick. It was very different to other skate trips I’ve been on. I arrived at this big house on a very nice street. I went in and (Jack) Brooks and Jamal (Smith) were sitting at the table rolling joints and they gave me a bag of weed right away. It went really smoothly.

I guess that was the first time you met most of them.
Yes, except for Chewy and Blondey.

Then you went to Tokyo for the Palace shop opening. How was that trip?
That was crazy too. It was my first time in Tokyo. I was blown away. I’ve never been somewhere that crazy. It was kind of a party trip, but we skated a bunch too. 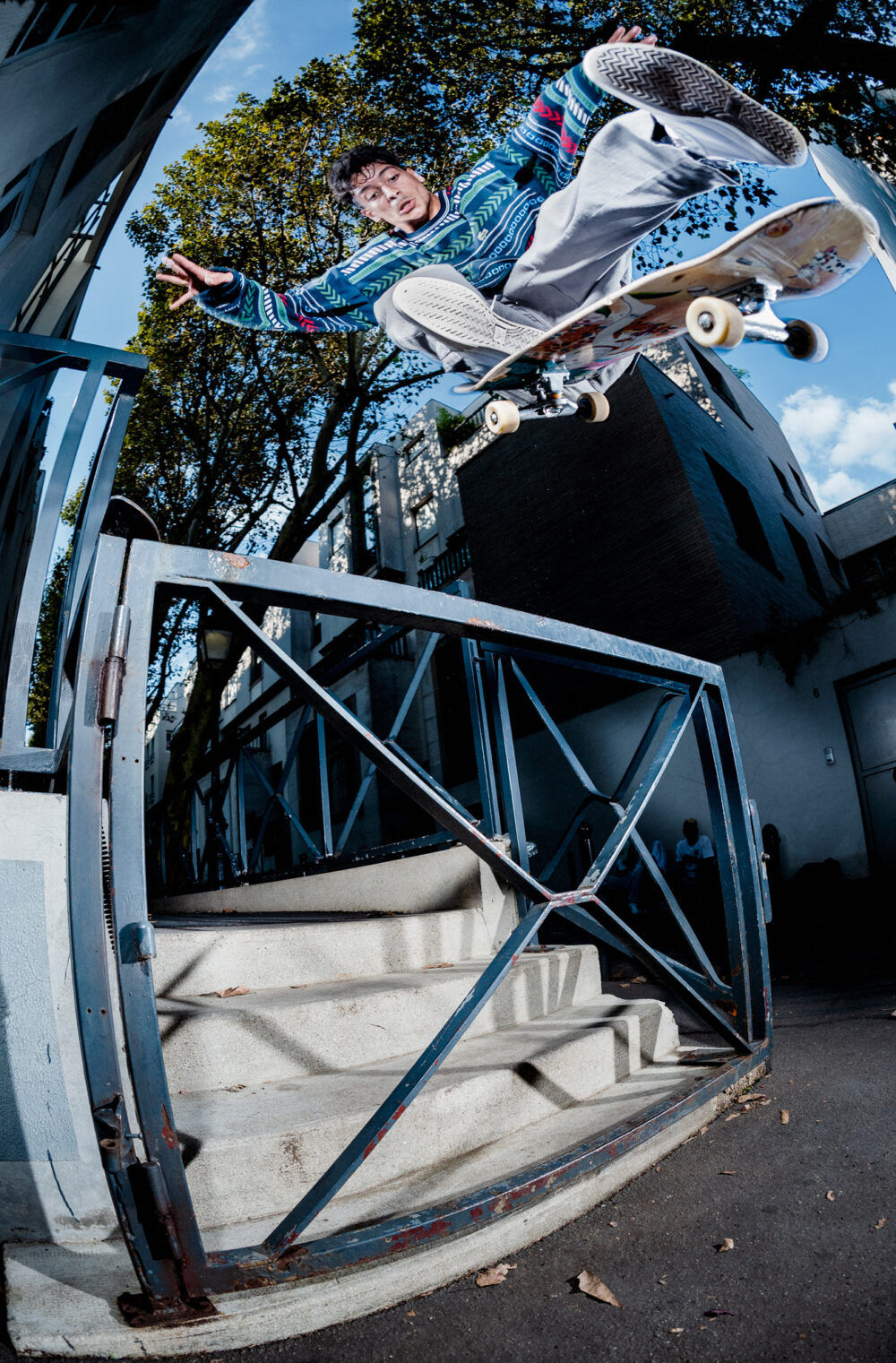 It’s hard to skate in Tokyo.
It’s very busy and you get maybe two or three tries at most spots. It’s quite limited. There are sick spots outside the city, but we didn’t go that far.

Who did you hang out with most on the team?
I definitely hung out with Kyle a lot, but I hung out with everyone because we had a lot of free time. We’d hang out at the hotel, maybe we’d skate a little bit, then we’d get food. The food there was sick.

I heard some other brands wanted you.
The same day I got asked by Palace, I was also talking with Pontus (Alv) about maybe going to Polar. A month before I didn’t have any boards and then all of a sudden I had this whole new problem: what to choose! It was super hard because I like both brands and I already knew the guys from Polar.

Of course.
So I guess it would have made sense to go there, but after Detroit, Palace just made sense, you know?

Tell us about Parade.
It’s a new skate marketplace launching online early next year. I’m going to ride for it and maybe more people in the future will too. It’s Neil Chester’s new thing. He was my team manager at adidas.

Who are your favourite skaters?
I like a lot of different people. I love to watch Keenan (Milton) skate, the old videos… Man I love watching Kyle Wilson skate. He’s got such a good style. It’s amazing to watch him pop super high, super slow. His skating looks slow-mo. I have to say Magnus (Bordewick) too. Raw power and good outfits. I really appreciate it when skaters dress cool. 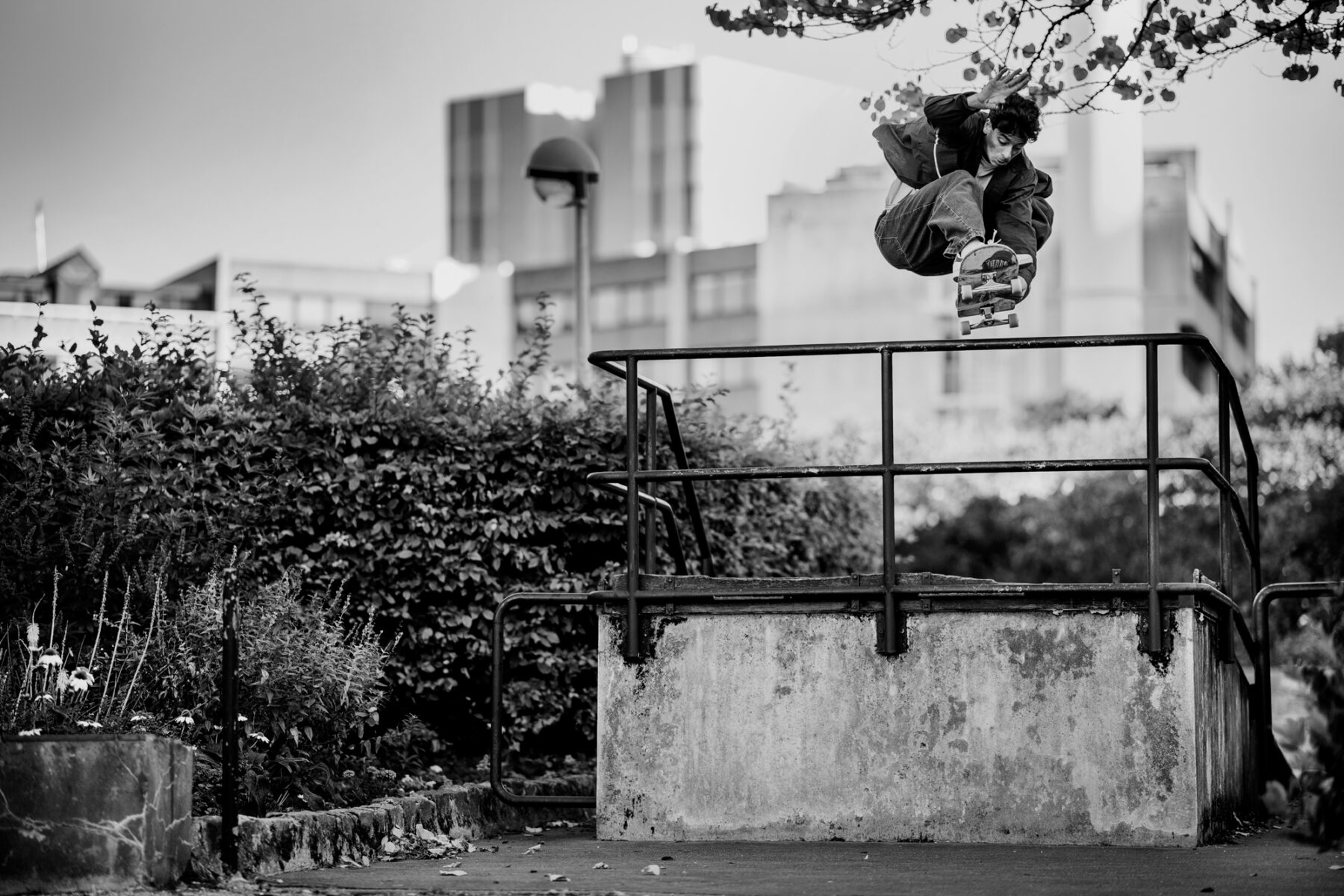 Can you learn style?
Good question. I think maybe some people can. I look at figure skating, how they look so smooth, and that’s clearly from training, so I guess you can, but at the same time I feel like everybody has a different natural style. It’s a hard question.

Ted Barrow wrote on Instagram yesterday – in reference to Roll Up – that the best way to see someone’s natural style is to watch them skating really fast.
He was basically saying that you can’t fake style going really fast. I’d never really thought of that, but it makes sense. When you’re uncomfortable you can’t really think about anything else.

What are your plans longer-term? Do you have a plan?
Just to be able to keep travelling and doing all the things I’m doing now. I’m pretty satisfied.