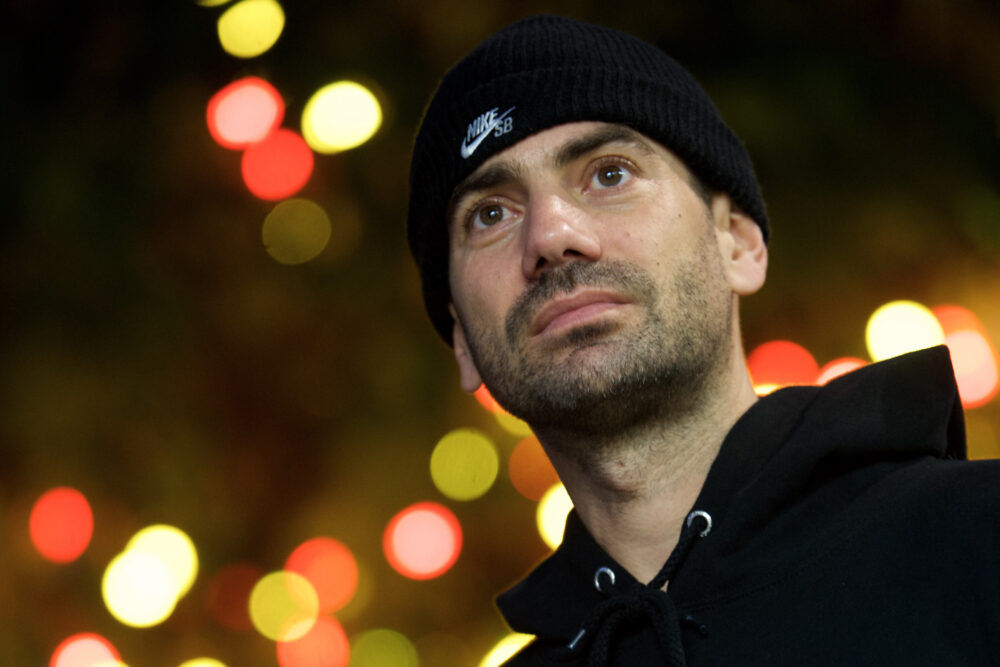 To mark the launch of Diamond’s new collaboration with Pacsafe, we caught up with Diamond Hardware rider JB Gillet for a chat about his years spent hanging out at plazas, thieves and the future of HDV in Lyon, among other topics.

You’ve spent a lot of time hanging out at some of the best-known downtown plazas over the years. Which are some of your favourites?
Hôtel de Ville (HDV) in Lyon, it’s home. Back in the day, Pier 7 in SF – the gold old days… More recently I like Shanghai generally – good vibes and there are so many spots. I always liked city plazas better. They are more alive. I do like skateparks from time to time, but I get bored if I spend too much time skating them. When everything is too perfect and too smooth at a skatepark it freaks me out, I don’t feel comfortable. I need some rough to get psyched.

A lot of the plazas were / are notorious for many reasons, not least thieves rolling through or lurking around.
Back in the Pier 7 days I saw some skaters I knew robbing other skaters and other dudes. I’m not snitching though! A photographer I know got his bag stolen at MACBA. Some dudes on a scooter grabbed it riding through. Apparently all the cameras and lenses were worth €50,000!

I think most skaters who have visited Barcelona have had something stolen.
There are pickpockets in most big cities but Barcelona definitely excels. I got lucky – it never happened to me when I lived there. I’m used to looking around me to see what’s going on, but I saw a lot of random people walking around with their bag open, not even knowing they had been robbed.

I did get robbed in Lyon once, when I was 18 or 19, I had my gold chain snatched by some dudes on the metro. I tried to grab it back, but one dude pulled a gun and put it in my face. Everything froze for second then the doors opened and they ran off. I bought that chain with my first skate money. No more coffee bean chain!

While we are on the topic of pickpockets and robbery, tell us a bit about the new Diamond x Pacsafe collaboration.
It’s designed to keep your stuff safe while you’re out skating. The zip lock system means pickpockets definitely won’t be able to get in the bags. The backpack and the sling are both dope – well thought out and good to travel with. The sling is great for everyday use – easy to skate with and it fits the essentials.

Back to plazas, you started a petition to save HDV from being demolished by the city. Tell us a little about that.
There were articles in local newspapers about plans to re-model the whole HDV area and make the plaza completely unskateable. At first skaters were like: “This is the end. It had to happen one day”. I was with Vincent Jugnet when we first heard, and I suggested starting a petition. Even if it didn’t work, I figured at least we would have tried and would have fewer regrets. Vincent put the petition online and after a week or so we had more than 12,000 signatures. Local TV news, newspapers, and radio stations started to interview skaters. It was like a snowball effect. We knew the city had to listen to us at this point. Jérémie Daclin and French Fred (Mortagne) were also really active – we had these meetings once or twice a week, where everybody helped any way they could. Jérémie got us a meeting at the city hall, and Fred oversaw the creation of a folder, which showed all aspects of skateboarding at HDV: economics, sociology, art, tourism, pro careers… It was really dope to see that it only takes a little spark for everybody to join forces and make stuff happen. The city said they’re going to fix the plaza next year and we will still be able to skate there.

You mentioned the good old days before in relation to skating Pier 7 in the ’90s. It’s a broad question, but how do you feel about the way things are in skateboarding today versus back then?
The progression of skating is way faster and the level is getting higher and higher every day. Things are moving in a good direction, but I do think in the ’90s and early ’00s videos, style, and attitude felt more authentic, fresh, or soulful. It was more like a slow cooking process back then, nobody was thinking in terms of views, likes or followers. We didn’t have any concept about all these numbers and measures except our paychecks!

Nowadays a lot of younger people are growing up with all this in mind. I just want to see some dope skateboarding – that gets me hyped, not the videos with the most views or likes. It is interesting to see how the new heads understand all this and make the best out of it though.

What are you working on at the moment?
There is an Hélas video in the works. That will be out some time next year. I’m going to the US at the end of the year and I also want to go back to Shanghai to skate and film. I have something coming out in February, but that’s a surprise.