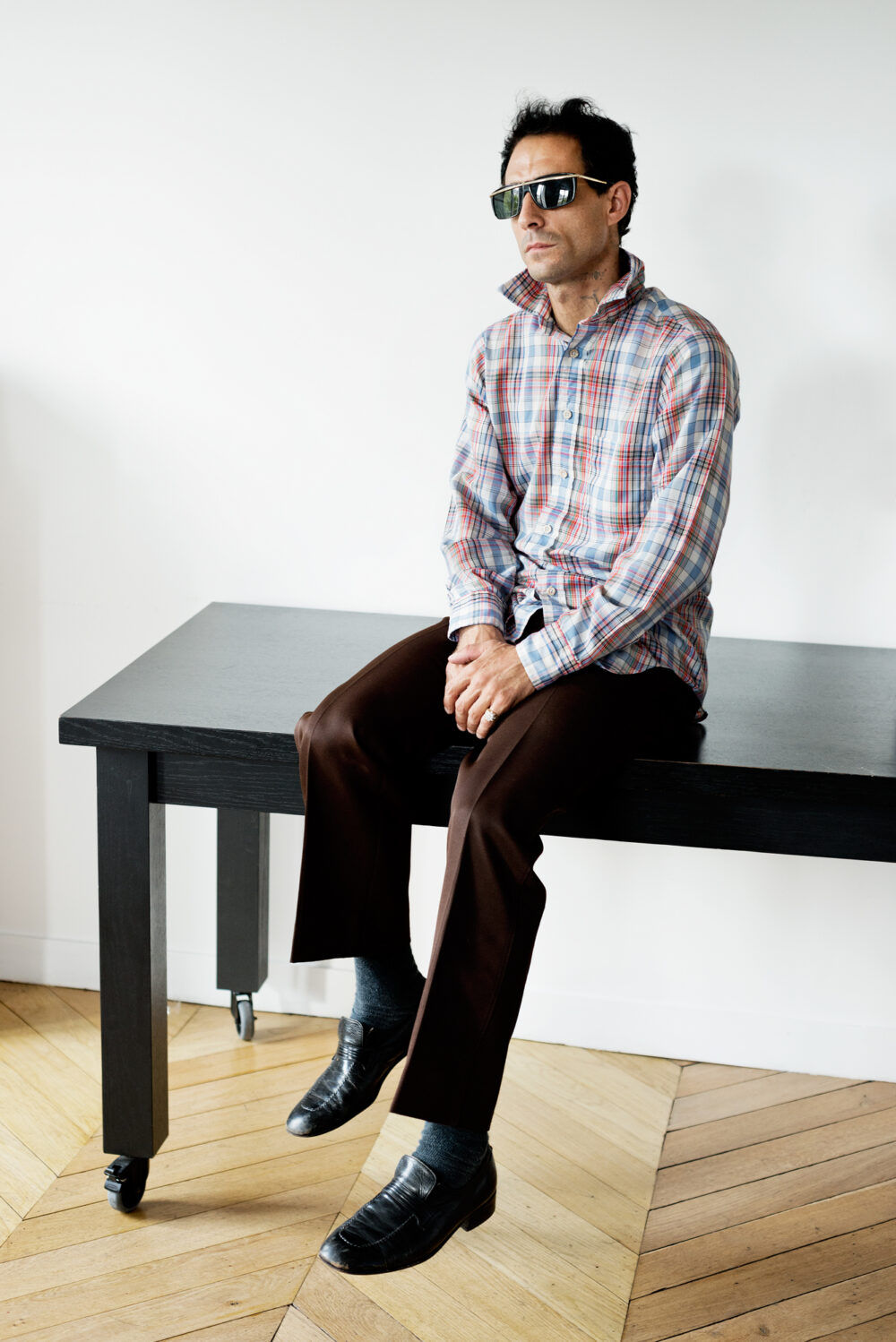 We caught up with Jim Greco on Monday during the Parisian leg of the We Are Supra tour for a chat about touring sober, writing movies, older pros, the Olympics, the importance of print and his third pro shoe with Supra, The Greco. The tour concludes tomorrow in Berlin. Details here. Check @supraskateboarding / #wearesupra on Instagram for tour updates.

How has the tour been so far?
I’m enjoying it very much. Paris is really fun – I like it – and Belgium is a nice place – it was really beautiful. There was a lot of rain. It rains a lot there, from what I’m told. In Paris the ground is a little smoother. I like both places.

Are kids still interested in demos and signings these days, when they have a window into the lives of their favourite skaters through social media?
I don’t really know. I think they’re just kind of happy to meet people in the flesh regardless of which tricks they’re going to do at the demo. So in that regard I feel like they’re still stoked on it, but they’re definitely desensitized to what they’re going to see at a demo.

Have many people attended the signings and demos on this tour?
Yeah, I feel like some kids showed up to see us.

And what about in the US?
It depends on what you do. If you go to the skatepark and just skate what’s there, then maybe not as many will show up as if you set something special up and skate it. Like when Jeremy Klein used to do the Hook-ups Stunt Tour. He brought the ramps in the van. So many kids showed up and it was really amazing. Kids were seeing something they had never really seen. So if you want to give the kids a good experience at a demo, either hang out with them and have a good time or bring them something different.

Supra tours have a reputation in Europe for being quite wild in terms of partying. Do you find touring with Supra tough, being sober?
I usually go skate the demo, hang out with the kids and then go back to the hotel. Then I go for coffee on my own little mission, then go walk around and take some pictures. I take my own little walk.

Are you working on any personal projects while you’re on tour?
I’m writing in my notebook a lot while I’m on tour and taking pictures. I’m writing a movie right now and I’m working on a bunch of different video and movie projects at once.

Can you tell me anything about the script you are working on, or would you rather keep that under wraps for now?
I’m kind of keeping it under wraps right now, until I flesh the story out completely. I know what the story is in my mind, but telling it is a different… I want to tell it to the people for the first time in the film, and then we can talk about it after (laughs).

What about the smaller projects?
I’m working on something new for Deathwish, something for Supra and then also with Jason Lee and another project with Jeremy Klein. So there are four different things going in addition to the movie I’m writing.

Tell me about your photography.
I don’t know anything about the rules of photography. I just know what I like to see artistically in pictures and from watching others and seeing photographs all over the world and in magazines. I don’t know about settings or anything like that, I just point the camera and take the picture. I’m not a photographer.

What do you do with your photographs?
Keep them. I have a Polaroid camera – or I develop the film – and make photo albums. I recently just went on a trip to Upstate New York with my girlfriend and we went to a vacation town and shot a bunch of Polaroids. Then, when we got back, we made a really cool photo album. There were different flyers from the parks and places we went. She had found a vintage photo album from the Goodwill. It was really cool.

These days it seems like people are skating professionally to an older age, often still progressing and pushing the limits of what’s possible, be that technical skating (Guy Mariano) or bigger, gnarlier stuff (yourself and Andrew Reynolds, for example). What explains this?
The guys you just mentioned are all sober for one thing. They don’t drink any alcohol or take any drugs any more. Same with myself. And all the guys you mentioned I pretty much know skate almost every day. The same with me: I will skate five out of seven days of the week. I’m on my skateboard almost every day. I live in downtown Los Angeles, skating around from spot to spot.

In your Thrasher ‘Hammers’ interview you discussed being disinterested in Street League, and described it as a “false conveyance of what skateboarding is all about”. Does this attitude extend to the Olympics, now that skateboarding is part of that?
I don’t really have any thoughts about it. It doesn’t really have anything to do with me. I feel the same as I felt about Street League about it. I’m going to do what I’m going to do, regardless of whether the Olympics exists or not. I don’t have cable so I’m not going to see the Olympics unless I go to some place where it’s playing. That’s not because I can’t afford cable, I just don’t want cable. I haven’t had it for many years. So I don’t really care what they do.

Does that portrayal of skateboarding to the masses bother you in any way?
It’s kind of the inevitable nature of the way the world works now with social media and pretty much capitalism going overboard into skateboarding. It’s going to happen. People want to see games. People want to make money off games. People make a lot of money off of games. And that’s what it is: they want to turn it into a game.

What do you love in skateboarding right now? What / who gets you inspired?
What gets me inspired? The act of doing it – going skateboarding and landing a good trick. Having fun just skating through the city as a spot.

Who inspired you most as a kid?
Jeremy Klein.

And you’re skating with him a lot at the moment?
Yeah.

Have you seen the new Birdhouse video, Saturdays?
No, I haven’t. I will watch it though. I’m making several skateboard movies right now, short movies, and my process is usually not to watch any new films as they come out, not as any sign disrespect to the people who have made them, I just want to have a clear head when I’m making my newest projects. Then I like to catch up and watch all the stuff after I make the projects. So I’m looking forward to checking it out.

Also in your ‘Hammers’ interview, you said that skateboarding was missing “more print”. With the recent Big Brother and Devoted documentaries, it seems topical to discuss printed skateboard magazines. Why are they important?
I grew up on print. That’s how I got to witness skateboarding. I like the imagination it introduces between the reader and the actual person they’re seeing in the magazine. There’s a disconnect and there’s some imagination left, instead of just seeing a dude brush his teeth on Instagram and then kickflip up a kerb 20 minutes later on Instagram… whatever they’re doing, their whole life is on Instagram. I like that there’s more imagination and more of a disconnect (with print).

Are you aware of the European skate magazine scene? It’s quite different to the US. Printed magazines are mainly free over here.
I saw some on the coffee table (at Supra) and they’re really good. They look cool.

What’s the scene like in the US at the moment?
There’s Thrasher and Transworld, six issues per year. The Skateboard Mag I believe is… I’m not sure if they’re still going.

Then there are some smaller titles, like Lowcard.
Yeah. There used to be some other ones, like Poweredge and Slap. I liked all those magazines, I liked Poweredge.

Which was your favourite, back in the day?
Thrasher. Thrasher and Transworld. Those two.

You’re working on a new pro shoe with Supra, due next year. Can you tell us anything about that?
It’s a fusion between one of my dress shoes – I have a large collection of dress shoes – and an athletic skateboard shoe, but I’m really focused on working on the last of the shoe. The last needs to be correct, because if you look at a dress shoe, it’s very slim in the waist and the way it hugs the middle part of your foot, then it gets gradually pointier towards the toe. You can take for example a Nike Janoski, which is like a Sperry Top-Sider with an athletic sole, but they did not make the last like a Sperry Top-Sider, the last is more like a traditional vulcanized sole. When I say ‘last’, that’s what I’m talking about. With this shoe, we did a lot of tweaking of the last and took a lot of gambles on how a dress shoe… I don’t want to take my dress shoes off, I want to skate in my dress shoes, so basically we (Jim and Adam Contreras, senior designer at Supra) made a shoe that’s more dress-inspired. I tried to do it with Vans 13 years ago. For my third shoe with Vans we tried to make a dress shoe into a skate shoe, but it had an athletic last. So this time I want to really walk the fine line between a dress shoe and a skateboard shoe and not have too thick of a sole, but also not have too thin of a sole. So there was a lot of work on the shape of it; the upper was there for a while. It’s coming out in spring 2018. I’m really happy about it. I look forward to trying the size 11 as I’ve only been able to squeeze a size nine sample on my foot.