Tell us about where you grew up.
I’m from Manchester. I grew up around Withington, just outside Manchester city centre, near the Curry Mile.

Have you always lived in the city?
Yes, pretty much. When my parents moved away to a little town in Wales, I just stayed in Manchester and skated.

When did you start skating the city centre?
When I was about 11 or 12 years old. I’d always go out with all the older guys. My mum and dad were pretty worried about me getting the bus into town.

Did you have your own crew from your area?
I had a little crew. We used to skate the local car parks and stuff around Withington. Then we went into town one time and saw a load of skaters at this spot and that was it, I just thought, “Oh my God, I’ve got to go and skate in town.”

Which spot was this?
It was a spot by the university I used to call Candyman. This guy who looked like the Candyman once threw rocks at us there. Now there’s a bar that people do tricks over but before the bar was there, there used to be hundreds of skaters skating the banks.

Who was skating Town Hall back in the day?
The older crew. My spot was The Gasworks. Me and my mates skated the kerbs there and they skated the big ledge at Town Hall.

Where was The Gasworks?
Opposite The Haçienda, which was a pretty cool spot. It was just rad place to hang out. It was almost like the Southbank of Manchester.

Didn’t you make a documentary about it?
Yes, I made a short about it getting torn down. We tried to save the spot actually. We went to some meetings and tried to get it made into a  little plaza, but they just kind of fobbed us off and told us what we wanted to hear, then built a big car park.

Who were some of the locals at the Town Hall back then?
It was a pretty powerful scene in Manchester at that time and a lot of the older guys were really good. It was quite inspiring, I guess. I had a lot of people to look up to.

Anyone people might have heard of?
Well there was Femi (Bukonola). He came from Manchester, he was killing it. I remember when I was really young I used to watch Femi skate and get hyped on that. It was the same with a guy called Mot, Darren Mottershead. He was really good. Matt Harfield too, he was a really good skater and the most northern dude you could ever meet.

They were quite intimidating – I’m not going to lie. It probably wasn’t as bad if you knew them, but when I was 13 it was pretty gnarly going up to them and asking for a board or asking where a spot was. They’d just take the piss out of me. 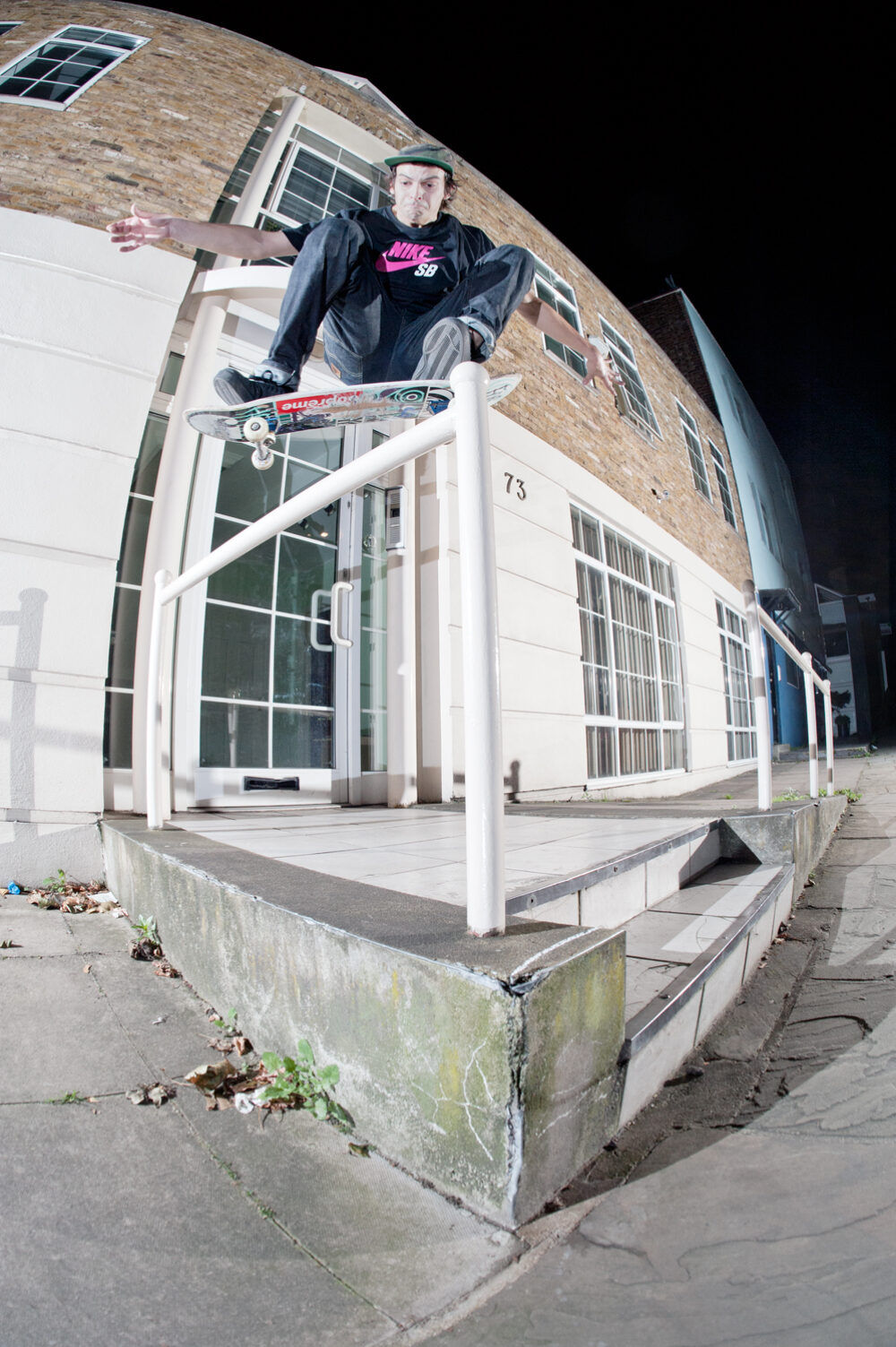 Didn’t your sister get you into skating?
Yes. She worked at Sheep skate shop in Manchester and she’d bring me back old boards and stuff. She used to go out with this skater called Ben Morley and I just looked up to him like you do when you’re a little kid.

Was Manchester a dangerous place to skate back then?
I think Manchester was a lot more gnarly, but maybe that was because I was really young. The first time I went into town skating, a tramp died at the spot. He threw up all over himself, then an ambulance came and took him away with a sheet over him. I was also out skating in Manchester when the bomb went off. The Arndale (Shopping Centre) blew up when I was at The Gasworks. That was crazy. We had to walk home. The whole of Oxford Road was just filled with people walking.

You mentioned some conflict between skaters from Liverpool and Manchester.
That’s nothing that I ever really experienced. I just used to hear stories about that kind of shit. I spoke to a skater from Liverpool who said he got his board robbed by someone with a gun in Manchester. But I feel like my generation kind of put an end to all that. We’d go to Liverpool and skate and there was no problem.

What keeps you in Manchester?
I just love it. I’ve got a good group of mates and there is a really good skate scene. I do a bit of film work outside of skating too, so it’s good to get involved with that scene.

Tell us a bit more about that.
I mainly do online promos and music videos. I really enjoy it. We have a lot of fun and there are plenty of productive musicians in Manchester to keep me busy.

What about the workshops you run?
I do graffiti and skating workshops with kids. I actually find it’s easier to teach a kid how to do a little piece than to teach them how to skate and they feel like they’ve learned more in a shorter space of time. I find it quite rewarding helping kids to do something they wouldn’t normally do at school. They get pretty hyped.

Can you see yourself ever leaving the city?
I think if I leave, I wouldn’t just move to some other town in England. I’d probably go to Spain or somewhere like that. 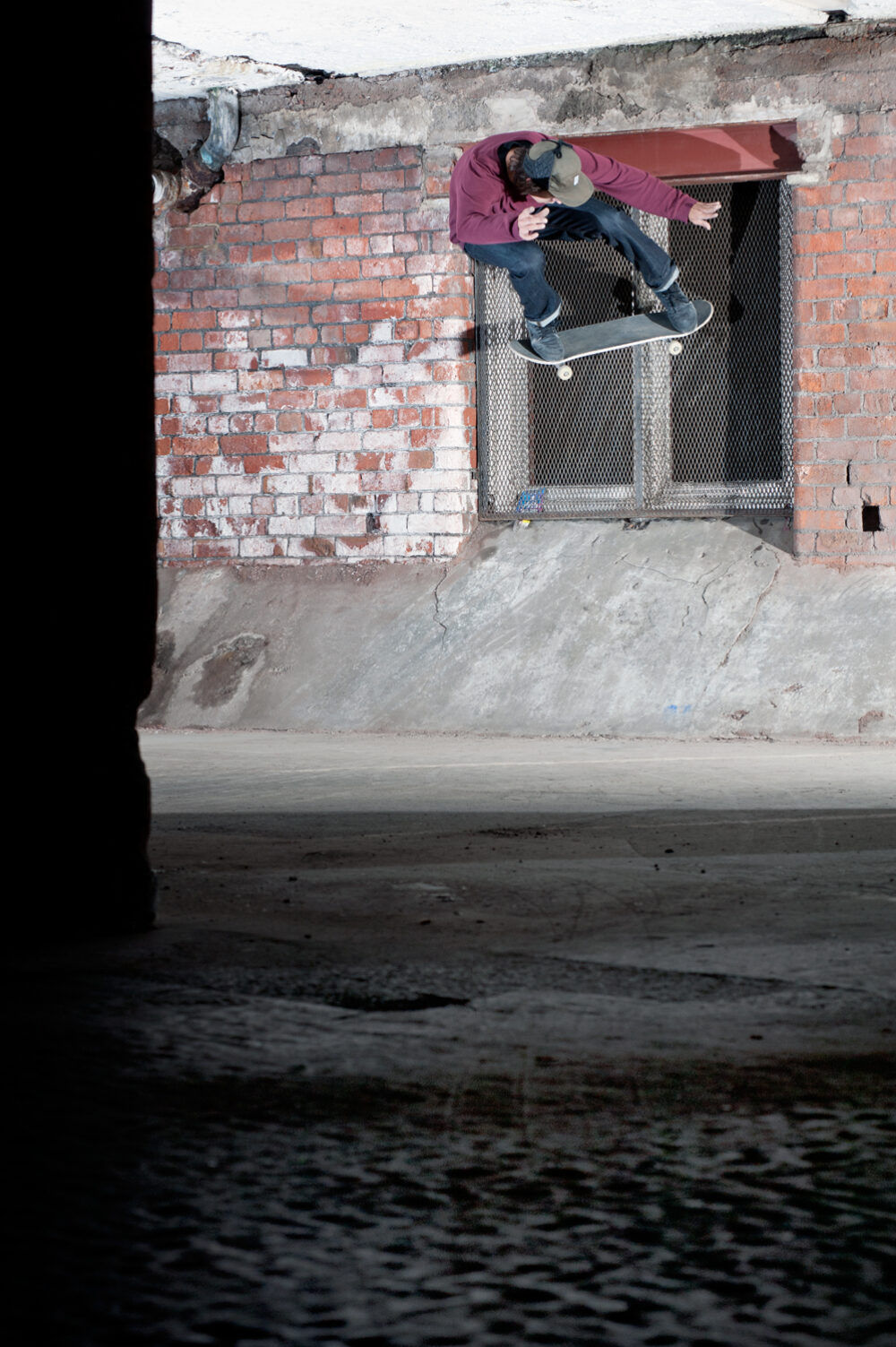 Manchester has a very strong skate scene, with regular full-length scene videos. What makes the scene so strong?
Everyone skates together and age doesn’t matter. There are no real cliques. Everyone knows each other, whereas in London you’ve got crews that have skated spots forever who hardly know each other. That’s not really happening in Manchester. If we’re making a video, we’re going to try to get everyone who needs to be in it, in it. Manchester is also really small compared to London, so you can just have a really good day out skating a lot of spots and pushing around. That’s what really I enjoy about skating.

Who should people look out for there?
Jed Coldwell. He’s always down for filming or looking for new spots, but if I want to just go skateboarding, I’ll call Jed and we’ll go and skate a ledge or something. Sometimes you need that.

Tell us about Shads.
Shads is Mark Kendrick’s new skate video. It took him a few years to make, it’s out now and it’s banging. You should check it out.

Do you have a full part?
Yes, but my part’s pretty chilling. I had a lot of other things to film for. Shads is more of a scene video.

It seems like there’s always a scene video on the go in Manchester.
I guess because we’ve got four or five filmers, whenever one is finished, we start another and it just keeps going. 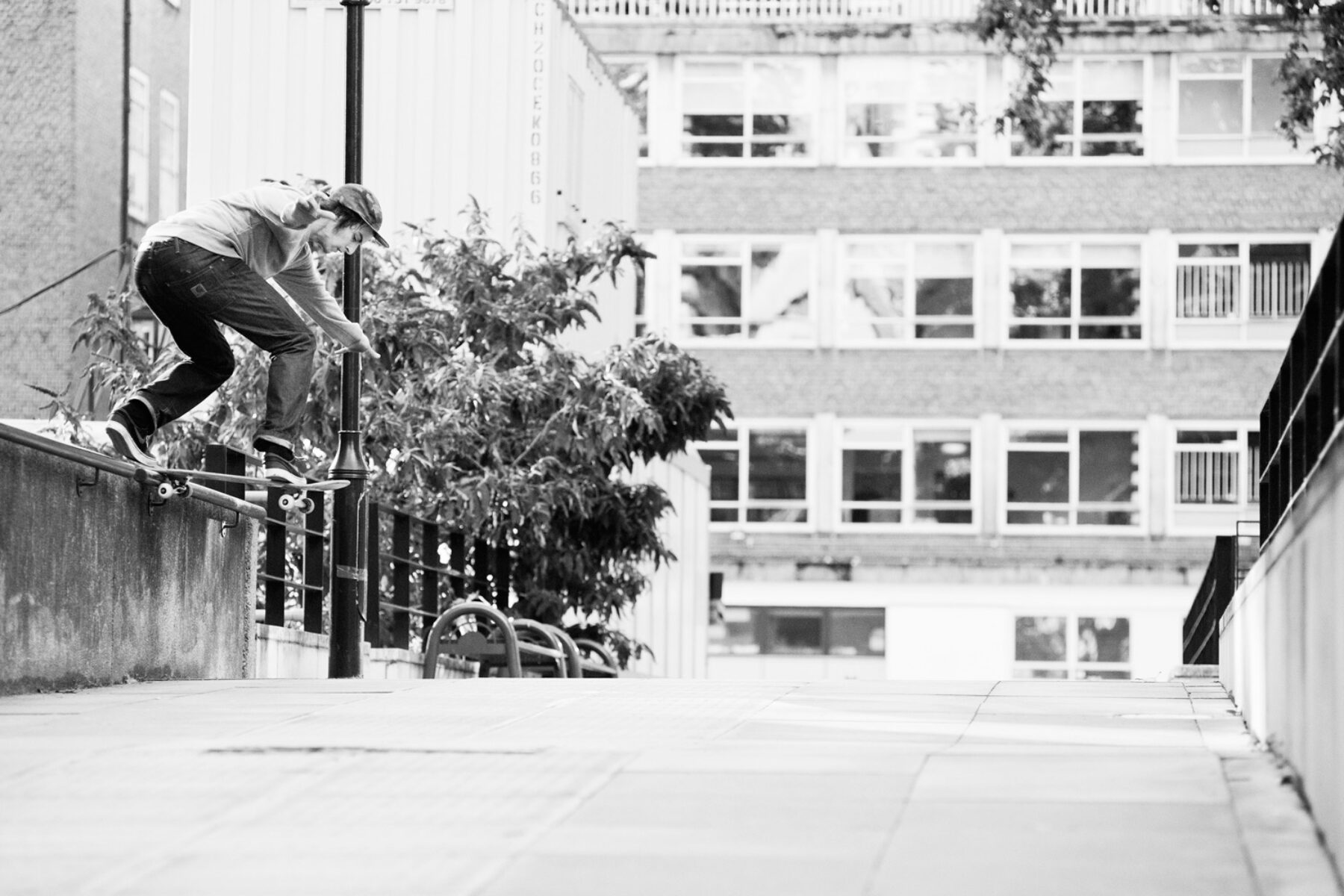 Is anyone making a video at the moment?
Yes, a guy called Jim Craven. His video should be pretty interesting. It’s going to showcase a lot of younger skaters and some different types of skaters. Like this guy James Gell. You’ll hear that name quite often if you go to Manchester, but no one really knows who he is or how he skates. He’s a bit on an enigma. You’ll see him when you’re out boozing and he’ll be at a spot at midnight skating on his own. Then you’ll see some footage of him and he’s killing it.

You are well-known for your videos such as Workers and Lurkers and Snake Eyes Die. Are you still filming skating regularly?
Not really. I just want to focus on skating. I’ll film little bits and bobs with my friends – some fun stuff at a skatepark or something – but I’m not trying to make another full-length street video. It just takes so long. You have to sit on a kerb for hours when you could be skating.

Tell us about the importance of Note to the Manchester scene.
Note is very supportive. If you’re sponsored by the shop or you’re friends with us, we’ll help you out – whether it’s a skateboard or rent money – and people respect that. That’s what a scene needs, a central point where people can meet up and also someone like Splodge (Paul Rogers, owner of Note), who’s an older figure to some of the skaters and who really helps them out. A lot of kids wouldn’t be skating now if it wasn’t for Splodge or Note. I think if a scene’s going downhill, it’s probably because the shops are closing. You’ve got to have a good shop with a good team. Our shop’s been around for a while and kids do look up to some of the riders on the team. They know that in the future they could get sponsored by Note and they’re hyped about that.

What made you leave The Harmony to ride for Landscape?
I just needed a change. I’d been doing the same thing forever. I didn’t feel like I had much support from The Harmony at the time and I got quite frustrated. I felt like I really wanted to skate as much as possible and for us to do as much as we could, but things were getting a little lazy and I’d have to push to make a little web edit or something. I just want to be the skater guy that gets an email saying, “Hey, come on this trip,” but in some ways I was the one doing that job. 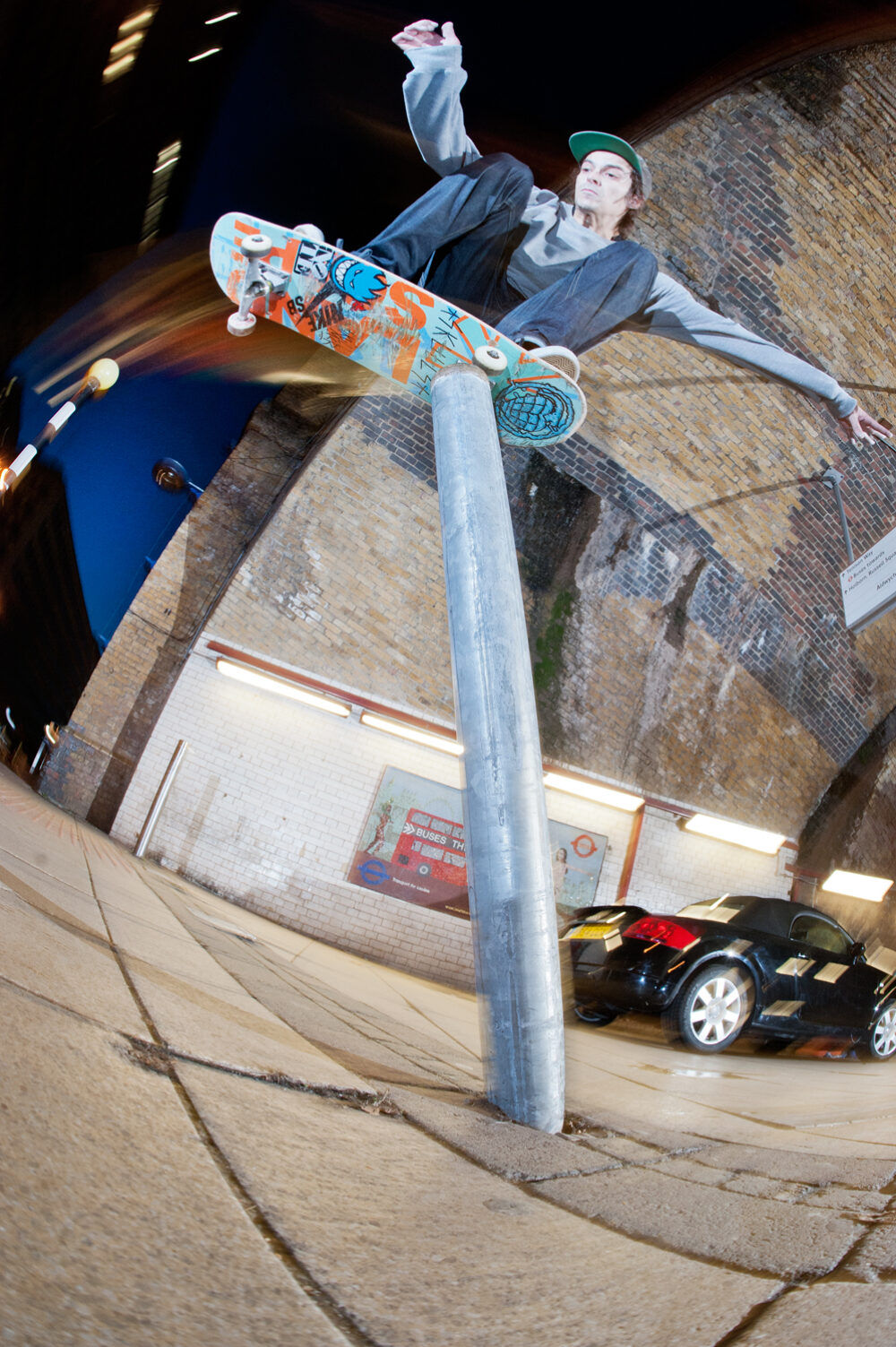 What do you think about the reincarnation of The Harmony?
I’m really stoked on it and I’m not just saying that. I think it’s really sick that Ali (Drummond) bought it. When I was on the team, Ali was the younger guy who had just got on and he bought it!

So when you left, did you already have an offer from Landscape?
I had spoken to Fos (Mark Foster, owner of Heroin and Landscape) six months before and tried to quit, but (Adam) Mondon (former owner of The Harmony) turned me around. So I rode for him for another six months and nothing really changed. I contacted Fos again and asked if the offer was still there, he said it was, so I just went for it.

I used to ride for Heroin when I was a kid actually. When I was 15 or 16, Snowy (Daniel Kinloch) and I rode for Heroin. That was my first ever sponsor. So I knew Fos already.

Why didn’t you have a part in Good Shit?
I was meant to, but it was a weird time for me. I think I’d just got a girlfriend and I probably wasn’t skating as much as I should have been, but most 16-year-olds do that. So I kind of sacked it off. I don’t even know if I actually got kicked off.

Did you consider riding for anyone other than Landscape?
I’m not going to lie – I always wanted to ride for Blueprint when I was younger. Maybe I could get on now, grow some dreads…

What are you plans for the future?
My plan is to skate professionally for a few more years and after that try to develop my film work and make that into a job. But I’m kind of torn between that and the youth work I do. I really enjoy it and teaching kids brings me a lot of happiness. There’s a lot of arse kissing in filmmaking and I’ve never really been that good at that. So I’m in two minds really.