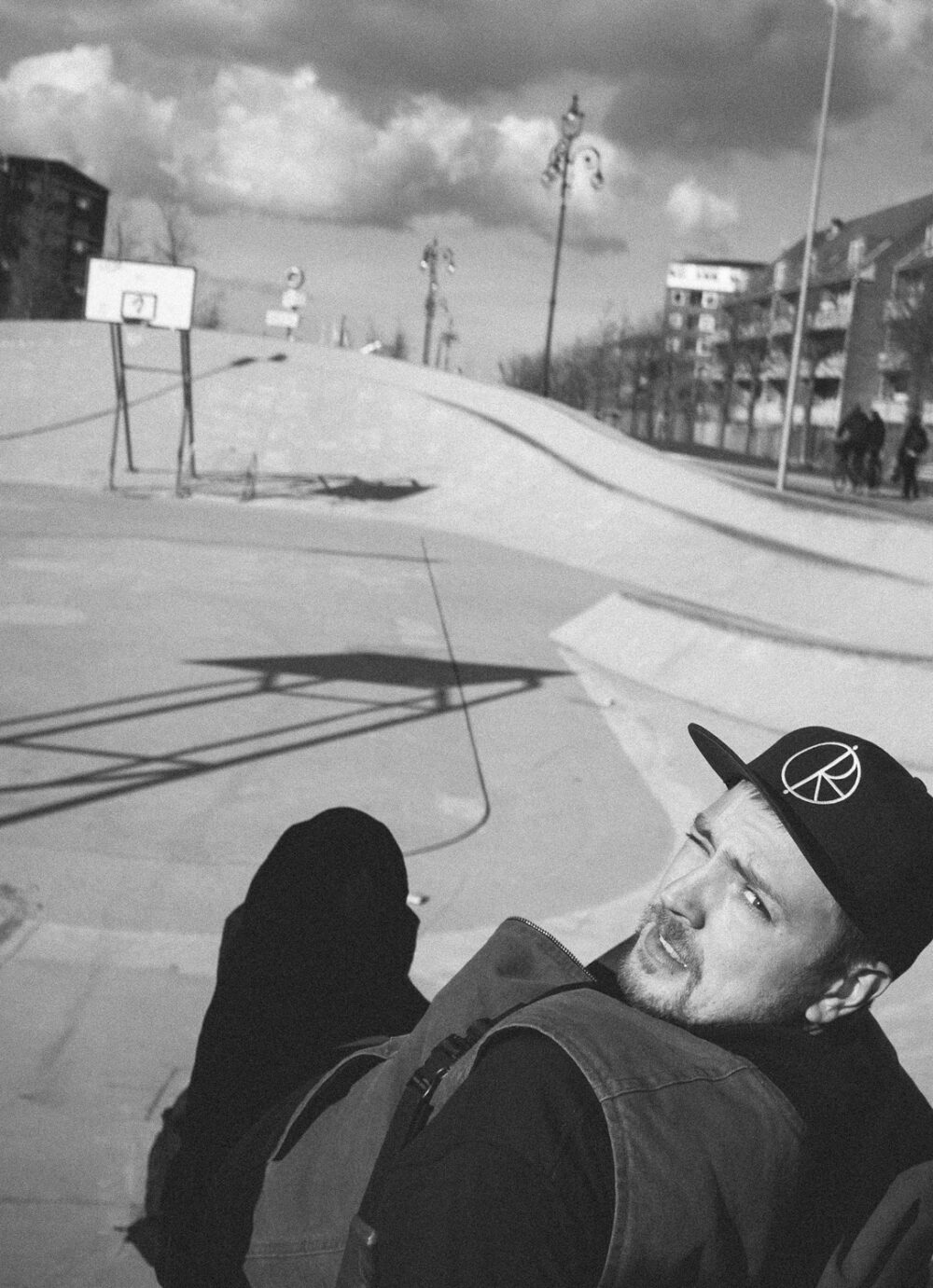 We interviewed Pontus Alv back in March (before “cherry” and Static IV premiered) to get some information for our Polar NYC article in vol. 02 issue 04. As you might expect Pontus covered a lot more ground than just the trip in question, so we decided to publish the interview in full.

This is the second Polar expedition to NYC. What keeps you going back?

The first time was to see Josh (Stewart). He has his headquarters there with the distribution (Theories of Atlantis). I mean New York is like… it’s a second home for all of us. The skating and the background that we come from here in Malmö, the type of skating, the type of architecture, the rough kind of look, it just fits a lot of our skating really well. And of course it’s a really exciting place to go to; it’s like having the entire world in one city. Even if for the last two or three years it’s been getting quite, I wouldn’t say blown out, because personally I never get sick of seeing New York images, but it’s had quite a lot of attention recently.

In terms of the upcoming Polar video do you feel NYC complements the other locations? I guess quite a lot of it is filmed in Malmö and elsewhere in Europe.

My philosophy has always been that we film the video where the team lives. So we live in Malmö and we film around here with the guys and of course we go to the UK because we have Jerome (Campbell) there. There’s a reason for us to spend time there and it makes sense and of course we go to Paris a lot and France in general because of Kevin (Rodrigues) and Paul (Grund) and then New York, where Arron (Herrington) lives. Those are the locations that we focus our video around because we have connections there. We have some kind of reason to be there. I don’t like just going to some random place just because, you know? We do that too, but mainly we try to focus the film where the team lives, to tell that story.

What led to Arron getting on Polar? Were you keen to have an NYC connection?

If you’re going to be a brand that is selling on a global scale, I feel that your team should be global too. We have riders from Sweden, Scandinavia, France, UK. So pretty well spread around Europe. If you really want to be present on the East Coast (of the US), I think it’s super important to have a heavy guy there. So Josh sent me his (Aaron’s) Static IV part – the early stages of it – and said that this guy has been killing it and of course I was blown away by the footage. It just felt like a perfect fit. But of course you have to see the guy, you have to go skate with him, you have to hang out, everyone has to go so there is a good energy. It’s super good because everyone likes him and they all go and visit him on their own and he comes here. And we’ll see: probably there will be another guy in the US at some point but nothing confirmed yet.

How is the Polar video coming along? Was the NYC visit the last big filming trip?

It was supposed to be. It’s funny that you ask that because this morning I actually sent out a massive group email to the team putting together a last plan. So we have an official deadline: the end of April. We’re going to be filming here (Malmö) for six weeks this spring. I just feel like I want to take some time on this one and I want to try to make something really good and different. I’ve been super busy for the last 14 months. I moved the company (Polar) twice and now we have a set-up with Mike (Halls) from Keen. He’s a partner in Polar now and we have our own warehouse and I have the whole structure now how I want it. So I’ve just been focusing on that for the last 14 months trying to find my way of how we want to have this company running. Now I feel like I can start focusing on skating and filming again, the kind of stuff that I love doing. So that’s great.

But to say something about the video, we have a lot of the heavy footage, but I still have so many ideas. I want to get more of a vibe going… something down the line of Trocadéro Days, a lot of double trouble, group skating… building up a real team vibe and that’s kind of the concept of the video, not to have so much of an individual superstar feeling. There won’t be so many individual parts; I think there will only be two. There will mostly be short little parts then parts just with everyone together. So I’m trying to break it down a little bit, the format of skate videos, and see where we end up.

Will there be a DVD?

Yes, this time we will probably do a DVD with the first two promos, maybe put Trocadéro Days on there. We have so much footage, an insane amount of footage, but the main goal is to be super selective. I will try to make it only 25 minutes. That’s my goal. Hopefully I’ll have something ready by July… sometime July or August hopefully. We’ll do a little global thing, the main cities in Europe – five cities – and then maybe a premiere in the US and one in Japan.

Are any of the Polar guys going to be in the Supreme video?

No, we don’t really have any connection with that. I mean they buy and sell our products at Supreme, but they’ve got their own gang you know, (Jason) Dill’s gang.

It sounds like the younger kids feature quite heavily.

Yes, I was just in LA and I saw a bunch of those guys so I’m really excited to see it. Bill’s (Strobeck) work is amazing – he always does great stuff – so I’m super hyped to see that one and I’m hyped to see Static IV the month after and then the Vans video and then us. It’s a good time in skateboarding right now. Tons of good stuff is happening and people are finally taking control again, just bringing back the elements of skateboarding. People like Fucking Awesome doing their stuff and Alex Olson, us, Palace… all of us are just taking control of the stuff that we… it’s ours, you know? It belongs with us and people are just expressing stuff and it’s great. It motivates me so much; I’m super hyped. For me it’s just a pure energy, I feed off it. I’m super hyped on that Fucking Awesome clip (Terp); that was great. For me it’s the best thing when you feel like there’s good shit coming out because then you feel like you want to do good shit. I’m really excited to see what’s going to come next. I think this year’s going to be a really interesting time. A lot of brands in the US will shut down. There will be a lot of big changes. A new generation, a generation shift of the culture, basically. Good or bad, but in the end it’s good for skateboarding as a culture. It’s been so stale for so many years and now the fun is coming back.

You spent time in SF back in the day riding for Mad Circle. Don’t you have a desire to bring your team there to film?

Yes, of course. It’s just been really easy to go to New York because Aaron lives there and the flights are pretty cheap and not too long and crazy. I want to do an East Coast tour this year, if it’s possible, just squeeze it in there somehow, and then next winter, believe it or not, I want to do an LA trip.

Yes. LA is just sunshine and all the driving and shit… it’s a nightmare. But it is the heart of skateboarding and I think I would like to challenge it. I want to go there and film an edit with the team and just skate LA differently and try to shoot it differently and film tons of Super8 and all the old LA architecture, just capture that whole landscape of LA. I think that’s going to be a big challenge as a filmmaker, you know, what do you do with LA? Everything’s been done. All the spots have been killed so you just have to totally create your own shit. I saw so many spots that you never see in videos, just random shit that people in LA don’t ever skate.

I would actually love to go back to SF. I’ve had this idea for a long time. I’d like to try and go there and redo the tricks that I did when I was a kid, in the Mad Circle days. Grind the top bar at Fort Miley, for example. Just going back and trying to do some of the tricks again 15 or almost 20 years later and see if I’ve still got it. That could be a fun little story. SF’s great, I miss it. I would love to go back there any day.

As this is an NYC article and you used to be teammates, I have to ask about Bobby Puleo. What was your relationship like back in the Mad Circle Days?

Back in the Mad Circle days me and Bobby used to skate all the time. He was the guy I skated with. We got the VX camera from Justin (Girard) and we used to film each other. I have a great story with Bobby. You know that ledge in SF on California Street where Cardiel had the cover of Thrasher? I think it was a noseslide.

Well I did a crooked grind on it, which today it is still pretty gnarly. Bobby was filming and I was eating shit and he was like, “Fuck, wait,” and he sat in the middle of the street where the steam was coming up from the grate, where they have water coming up or whatever. He was sitting in the middle of that like, “Yes, this looks super sick,” and I was like, “Really?” and then I fucking pulled it. I twisted my ankle but last try I made it and when we looked at the footage, the whole lens was just all wet. It was just a foggy image of me all blurry. I was so bummed. I couldn’t skate for two weeks, twisted ankle. I made the trick and just didn’t get the footage. Classic Puleo; trying to get artsy.

Back then he and Justin were always talking about weird shit and conspiracies. He was already into it back then.

He came out with that part from nowhere last year. I don’t know if that was new footage or not.

Some of it was new. That shit was sick. I actually met Scott Johnston in Los Angeles a few days ago and we had a chat about how everyone from the Mad Circle team kind of got sorted out. You know, Karl Watson’s got his thing and Cairo (Foster) is somehow involved and Scott Johnston is doing the shoes (Lakai) and fucking Justin is a computer genius. Who else was on that team?

Yes, Rob Welsh is doing Expedition. So everyone is in the industry and Bobby is just the guy that never really managed to get it together. I wish all the best for him. I heard he’s starting his own company. All the best to Bobby Puleo. I’m still a fan. Every time I see footage or a photo, it’s always super sick and super dope.