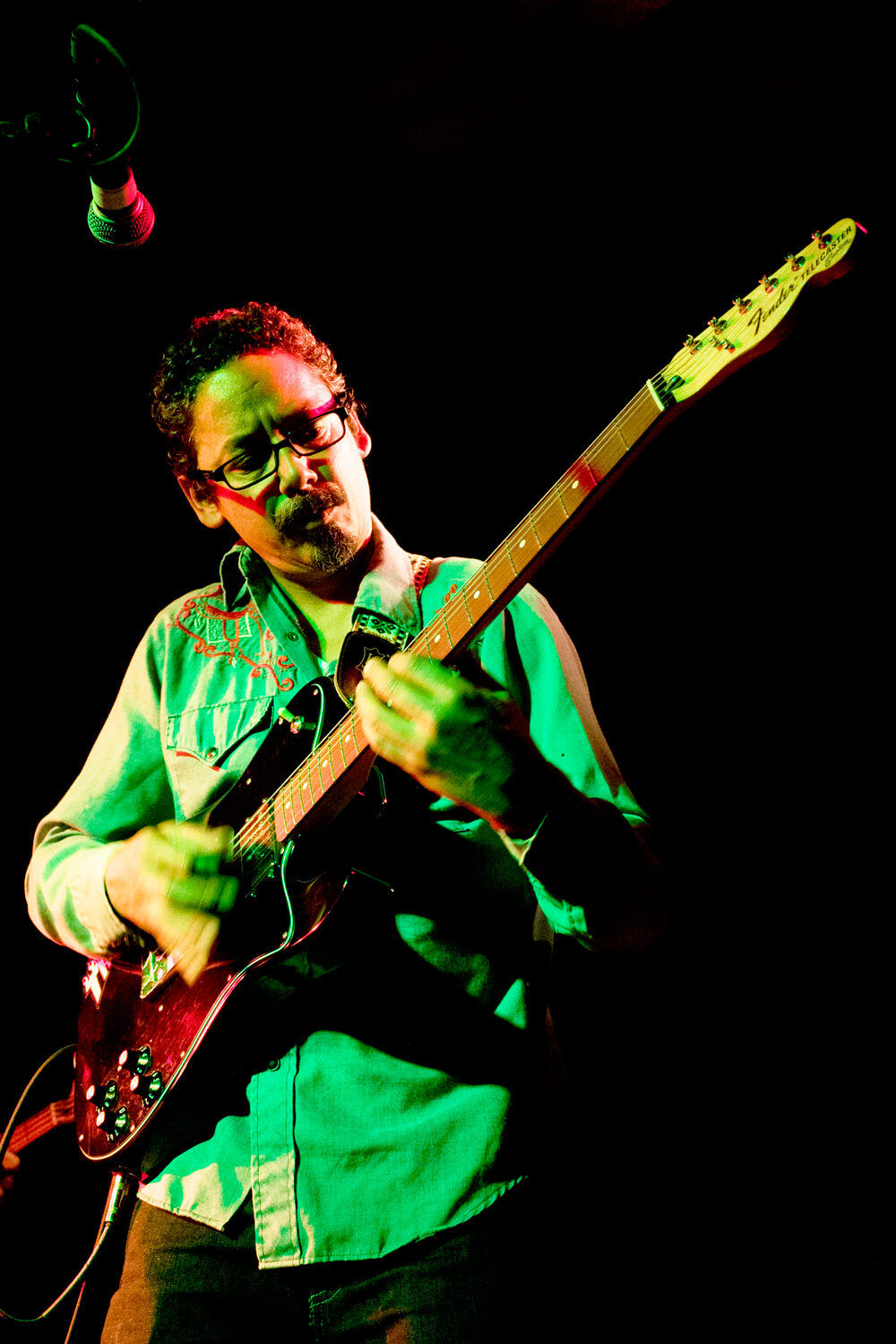 Earlier this week, Levi’s Skateboarding invited Grey along to interview legendary San Francisco skateboarder Tommy Guerrero before his gig at the Camden Underworld. Tommy is currently on tour though Europe. His new album, No Man’s Land is available through Asphalt Duchess.

Tell us about the tour you’re on right now. Are you promoting a new album?

Yes, sort of. I wanted to celebrate this release and I was fortunate enough to have a collaboration with Levi’s to get over here. I don’t have a band because I make all my records solo – I make everything – so I have to hire people to come. These guys are my friends but you have to pay them. It’s not like a band where everyone can take the hit for the sake of the whole, so I’ve got to make sure they get paid. Then the cost of flights… it’s astronomical. So I’ll be lucky not to lose more than $5000. If I lose $5000, then OK. But this is more something I wanted to do because I’ve never done it – I’ve never toured musically over here.

Never. I’ve only been here a couple of times when I was on Mo’Wax, a couple of little solo things. But other than that, never.

What’s your connection with Levi’s? They’re supporting the tour…

Yes, they’re just supporting it. I had a collaboration with Levi’s in Japan a couple of years ago and did a little line and I’ve just been affiliated with different people who work there and they’re always just down to support, you know? It’s the same with Vans. They used to support me. It’s great to have these people helping me out.

You put out records for years on Mo’ Wax, a pretty influential label back in the late ’90s. How did you get hooked up with that label?

It’s a funny, roundabout way. This guy Andy who used to work at a skate distributor, you know Andy Holmes?

I made a clothing video called Amigos, I had a clothing company (Forties) out of Deluxe a long time ago. So I made a video, shot everything, filmed it, did the whole deal, made all the music for it. Andy (director at Mo’ Wax between 1996-2000) heard the music and they were like, “Hey Tommy, you should release this.” It had never even occurred to me. I was never going to release music; that was never the point. My first record was never meant for consumption.

So finally what happened was Thomas Campbell released it. He had a really small label called Galaxia. They were taking their time at Mo’ Wax – they weren’t sure – so we put out the first record. I heard James (Lavelle, Mo’ Wax co-founder) was in Japan, heard it there and was like, “Why didn’t we put it out?” So he came back and said, “Let’s do it.” So that’s kind of how it came to be from a skate video that I had done. Thanks to Andy.

What’s the deal with Galaxia now? Are you a partner?

No, Galaxia has actually pretty much ceased to exist other than its catalogue. There are only two guys. Thomas is the creative and then Greg (Lamson) is at the business end and he has a full time job and two kids. It’s a total hobby. It’s a passion. It’s a love. And he (Greg) actually doesn’t have time to do it. So Thomas started his own publishing company, publishing books and art and whatnot and he’s going to start doing music with The Mattson 2.

Yes, exactly. I’m doing my own thing too, it’s called Too Good. So I’ll release this record in the States when I get a fucking chance, but I was super thankful that Asphalt Duchess from France released it while I’m here. They had to hustle to do it because they only had six weeks.

Can you name a record that has been of particular inspiration lately?

Yes, actually Éthiopiques, Vol. 4. That stuff has been stuck in my head for a while.

Are you still skating often?

Yes, of course. My son skates so we go skating every weekend that I have him. It’s fun.

Do you still make it out to the avenues at all?

No, I haven’t in a long time, other than Potrero Hill near my work. I skate down hills going to work and to Deluxe, but it’s mostly parks. It’s hard. Everything hurts, completely, but I still have that fucking desire to try to kill myself. Right before I came I was trying to ollie over the top of this hip – it was a 6′ top – and to get speed you have to hit this kinked quarterpipe – it’s a shitty skate park where I live. So I was just trying to clear it and I’m fucking bailing and my son Diego was just like, “Dude, what are you doing?” And I had to stop because I’ve got this tour. I can’t get hurt. A lot of people have invested a lot of energy and time to help me out.

So yes, long story short, of course I’m still skating. And I want to go to Southbank while I’m here, but we’ll see. That would be rad.

Name your top three San Francisco spots past and present.

Who has been your favourite Deluxe rider from over the years?

It’s hard to say, because there have been so many but now, Dennis Busenitz. He just embodies skating, the way he approaches it, just fast and hard and loose and raw and really of the moment. You know, you’ve seen those fucking videos. He doesn’t try that stuff all day, he’s not one of those dudes. He’s so fucking gifted.

Then Ishod (Wair) too of course. That guy doesn’t stop skating. I think he skates in his fucking sleep. He’s crazy. And that other cat, Donovan (Piscopo), who’s in that Nike video (Chronicles Vol. 2). I love the way he skates. He’s raw, like a skate rat, kind of Omar Salazar style. I love that.

Anyone from back in the day?

Ethan Fowler. He was one of my favourites. He was so naturally talented. He just looked like he was born on a board. We met him when he was 14 or 15 in Texas at a contest, and he was doing these huge frontside flips on a quarter pipe and we were like, “Who the fuck is this kid, man?” And Matt Rodriguez, shit, he was one of my favourites of all time.

And further back, Jay Adams and Tony Alva, those dudes. They started it.

You mentioned the Forties video Amigos before. Strangely enough that was my first skate video.

It was quite an unusual introduction to skate videos. Can you tell us a bit more about that video and how it came about?

I was doing a clothing company out of Deluxe and I had a handful of guys who liked the clothes and I’d give them whatever I could. I wanted to make a video because I had a (Fisher-Price) PixelVision camera that recorded to cassette tape, which is an extremely fucked up technology – it doesn’t make any sense. It was a kid’s toy, but I loved it. It was super grainy and fucked up. So that was sort of the inspiration to go out and start filming. I started filming those dudes with that and I had a Super8 as well and a Hi8 and I just shot random footage. I wanted to show skating the way it truly is: a bunch of dudes just skating and having fun. Because I’m still not of the mindset of trying a trick 10,000 times for four years. It’s not skateboarding to me. That becomes more along the lines with gymnastics: compulsory and weird, which is fine, which it totally cool, but that’s never been my approach nor that of the people I admire.

So it was just a bunch of friends skating around San Francisco. Julian Stranger has the one switch wallride. No one even realises it’s him because everyone’s like, “Oh, whatever, it’s sketchy, it’s fucked up.” He did one that was super clean, landed, went off the curb and then bailed and he was like, “I’ve got to make it off,” and I was like, “Alright, but that was amazing.” It was super clean. You wouldn’t even have known it was switch.

So that’s how that came about. But what I was doing with clothing back then was unfortunately not of the time, stylistically. I was making Denim that was cut like a Levi’s 501, when everyone was doing the baggy shit. And I was using these T-shirts – they’re called Screen Stars – that were left over from the ’70s and they were more fitted and really thin. They were like $1.50 or something ridiculous because no one wanted them, but I thought, “Those are the best fucking shirts ever.” It was just one of those things. I wasn’t of the time. I was kind of ahead of the curve.

Perhaps it would be successful now.

Yes, maybe. But it was hard because I was making everything in San Francisco, literally. I would pick up the fabric, the zippers, the button tacks and bring it all to the cut and sew spot in San Francisco. It was difficult. And what happened 50% of the time? It came out wrong. It’s just not gratifying at that point. You just think, “Fuck this, it’s just stupid clothing. I could go buy some jeans and be over it.” But it was fun while it lasted and I was super grateful to have (John) Cardiel, who rode for it and fucking Franky (Gerwer) and Ray (Barbee) and Jackson Taylor and Karma (Tsocheff) and just a huge crew of insane dudes.

I always liked the ads.

Later, towards the end, I just started having a lot of fun with the ads. I laid them all out and everything and I was just kind of making fun of the whole X Games thing and the whole extreme sports bullshit they were trying to cram down people’s throats. It was fun, social commentary.

Before I split, I actually had a studio built, an actual proper small recording studio. I’ve never had that in my life, so I’m looking forward to just getting in there and seeing what happens. I just need some acoustic treatments to happen and then get my board in and get a bunch of gear in the control room. The live room is set up, me and Josh (Lippi) over there – the bass player – we have been jamming in there. I’m gonna get him in there because he’s amazing and get friends in there just to record and fuck around. You know, just get people in there and play some music and have some fun.