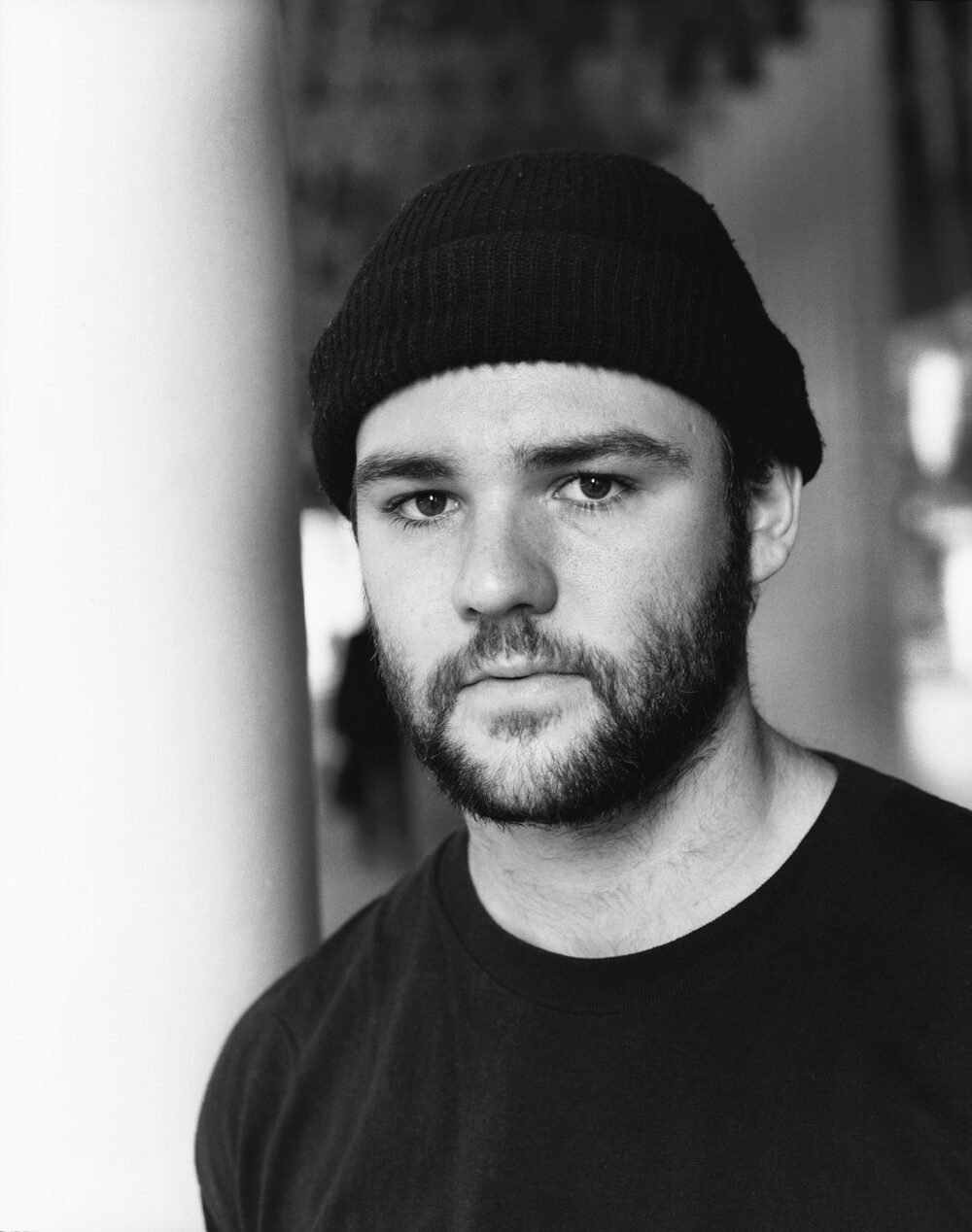 Where did you grow up?
I started skating in this town next to Cardiff called Penarth. You can skate to Cardiff over the (Cardiff Bay) barrage. The skatepark is actually on the barrage, halfway between the two. Before I moved to Penarth, I lived in a tiny little village called Trehafod in the valleys, near Pontypridd.

How was it growing up in the Welsh valleys?
It was pretty weird, man. It’s pretty fucked. There were a lot of strange people. It’s not a wealthy place – nowhere in the valleys is. Ever since the collapse of the mining industry there are no jobs. There is no strong industry in the valleys.

How was the skate scene in Penarth back when you started?
It was sick. There was a shitty little skatepark we used to go to and there was this sick car park right by the station. That was where I first saw Steve King, one of the best skateboarders out of Wales and probably the UK. He’s fucking incredible. I’ve never seen talent quite like it.

What brought you to London?
University. And if I’m honest, skating too. I was lucky because the zoology course I really wanted to do happened to be in London. So I went to Queen Mary and met a load of skaters through Casper and Hector Barnett, who I already knew. People like Kyron (Davis) and Manny (Lopez).

What made you decide to study zoology at university?
I had wanted to forever. There is not much to do in the valleys, so my parents used to sit me down in front of David Attenborough and I became obsessed with animals. I used to go out in the forest and down to the lake, catching frogs.

Did you enjoy the course?
Amazing. It was so good. I miss it so much, genuinely. Everything was so interesting, why life exists the way it does. That stuff is crazy. 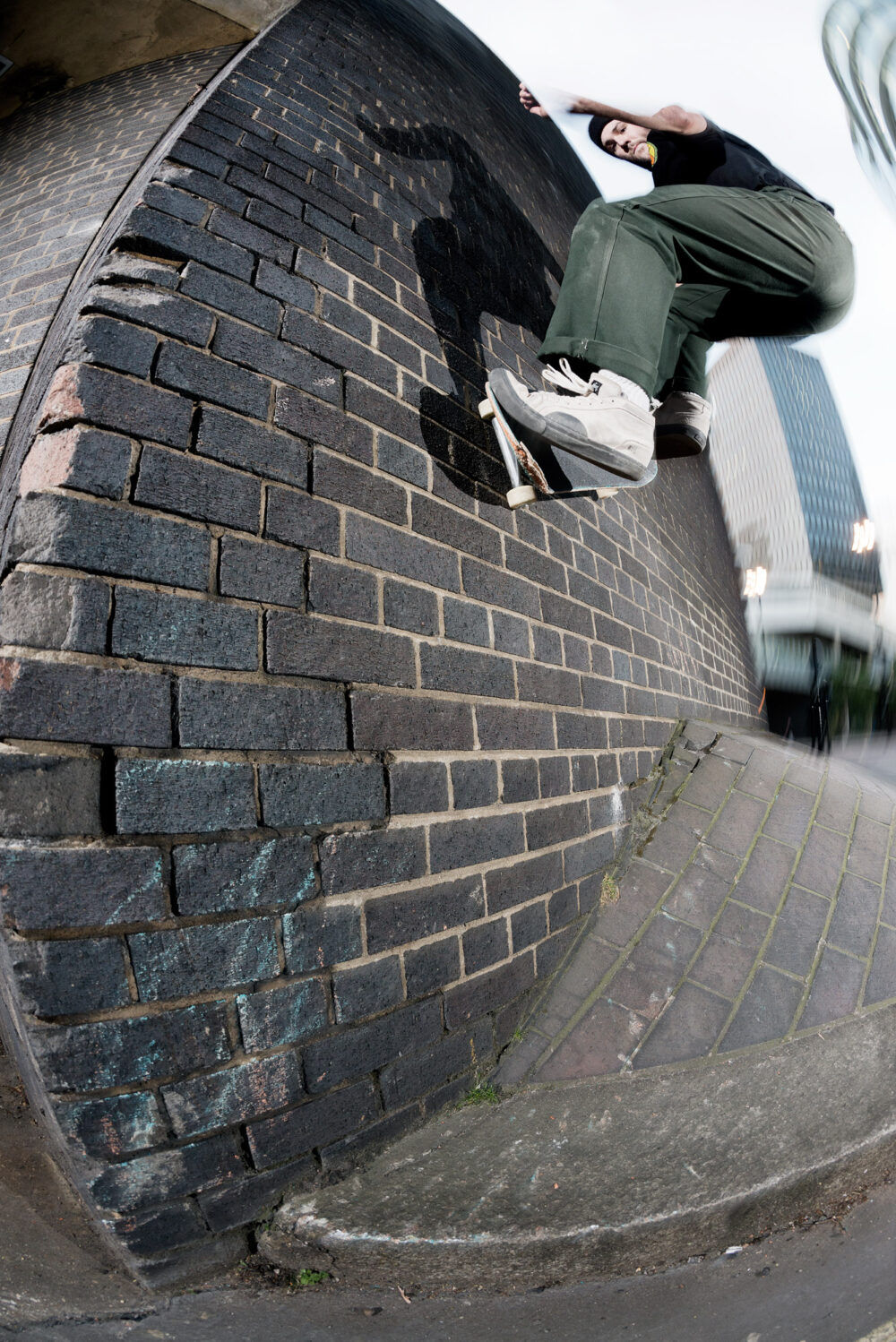 Who do you usually skate with in London?
There are a few groups. There are the guys I live with: Sam Bottenberg, Leo MacDonald Oulds, Jimmy Silver and Will Creswick. I love going out with them, but we usually just end up going to skateparks. We also have this south London group chat with loads of people, which is perfect if you want to skate Saturdays and Sundays. Then I’ve been trying to go out with (Dan) Magee and Kev (Parrott) and all those guys to film for whatever it is they’re doing – I’m not even sure. It’s hard at the moment, because I want to go and skate with everyone, but with teaching and going away soon, it’s hard to make time for everything.

So when you do skate, you’re focused on this video project.
Yes, even though sometimes I’d rather just go and drink a beer and skate Peckham Rye mini ramp.

Who are some up-and-coming skaters in London people should look out for?
Logan (Seetal). I sold him his first skateboard in Parlour four years ago. He really hasn’t been skating for long – I can’t believe how quickly he got good. He’s got a completely unique style. Billy Trick is from Swansea, not London, but he’s great – really energetic and spontaneous.

Whose skating inspires you?
I regularly watch Hjalte Halberg, Andrew Allen and Bobby Worrest. They are my go-tos. Then I watch a lot of Canadian and Australian skateboarding too and I always get hyped watching my mates.

Andrew Allen and Bobby Worrest are often described as bigger guys. So are you.
I didn’t realise I was a bigger guy until Bryce Campbell told me I had fat bastard steeze when I was working at Parlour. Then
it became a recurring theme.

Do you feel some affinity with those guys?
A little bit, yes. They all go really fast. That’s fucking sick. I also like to watch old Brian Anderson footage. Weirdly, as a kid, I had a small Josh Kalis obsession. I’d buy Workshop stuff because of him. 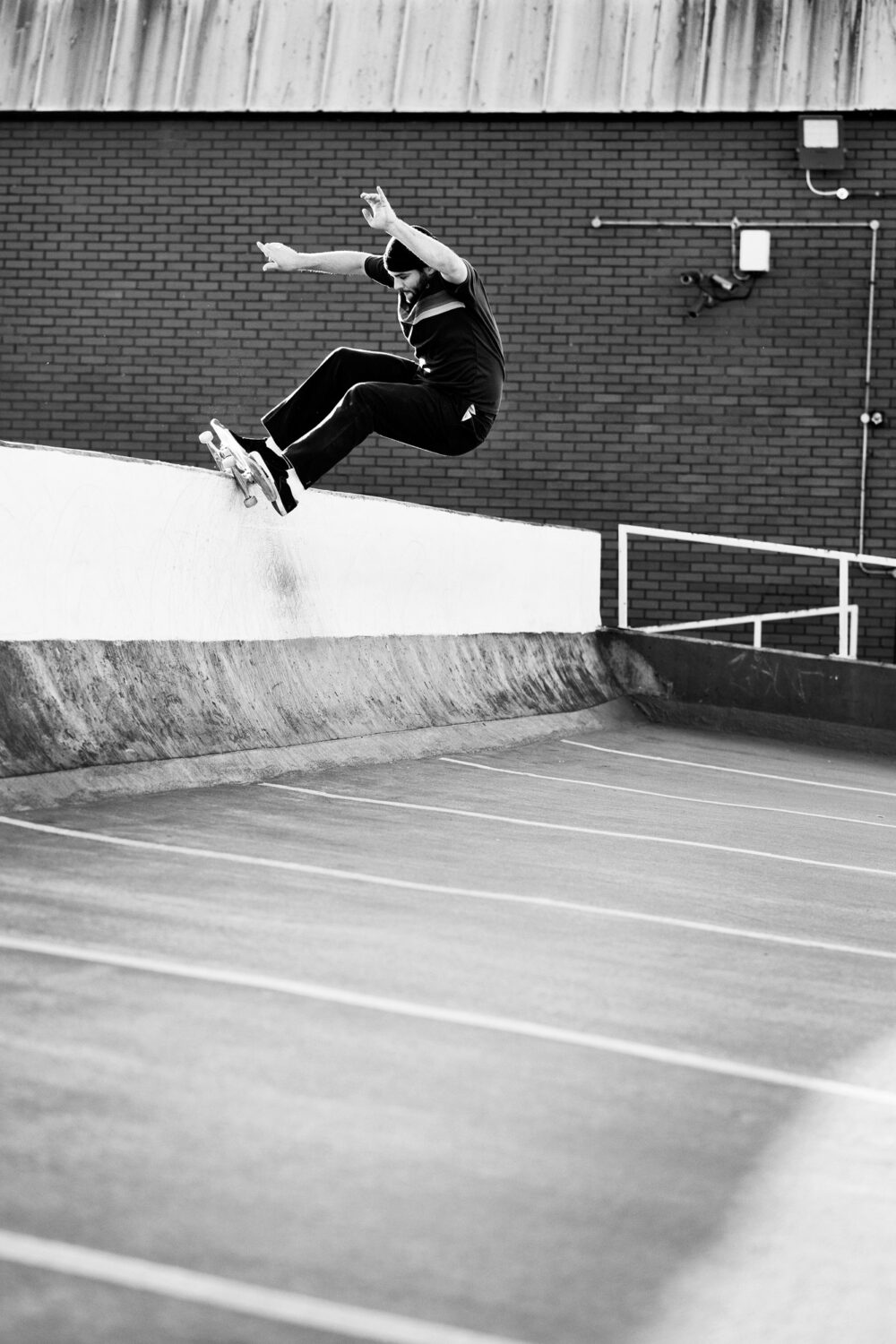 We have shot a few photos lately and it struck me that none involved you hitting you tail.
I used to do way more flip tricks and shit, but a few years into skating – around 2010 – I started to discover what I liked. I rinsed all the Polar promos and the newer Static videos, rather than the older ones. Also Cardiff skatepark has a jersey barrier obstacle and generally facilitates that type of skateboarding. It could be down to laziness too.

Why do you slam so much?
Maybe it’s because I’m a bit top- heavy. I don’t think I’ve ever been technically that good. I think I get lucky (laughs). I just throw myself at something for a couple of hours and hopefully it works out. When I slam, it’s always trying the stupidest stuff. That’s the case for everyone, but it happens to me twice as much. I’m pretty good at slamming now.

You are currently a geography teacher. Tell us about that.
I had a little bit of a panic last summer. I spent two years working in the world’s worst skatepark – Better Extreme in Barking – teaching kids with homophobic dads to skate. Anyway, the pressure was getting to me and I started teaching. I decided on GCSE geography, as that fit my interests better than biology. I’ve been lucky with my schools. I taught at one in East Ham and one in Barking. The Barking one was rougher, but I enjoyed it more – the kids are more entertaining to teach, it’s more dynamic. But it’s hard, man. After this year, I’m done. It’s so much work. It’s the planning, the marking, the reflections. There is so much admin. I decided to teach because I didn’t want an office job, but what you get is an office job plus the teaching side of it.

But you do get something positive out of it.
Having really good discussions in class is so sick. When you get kids really understanding how we’re causing climate change and they start to become passionate about their responsibility to the planet, that’s really cool. 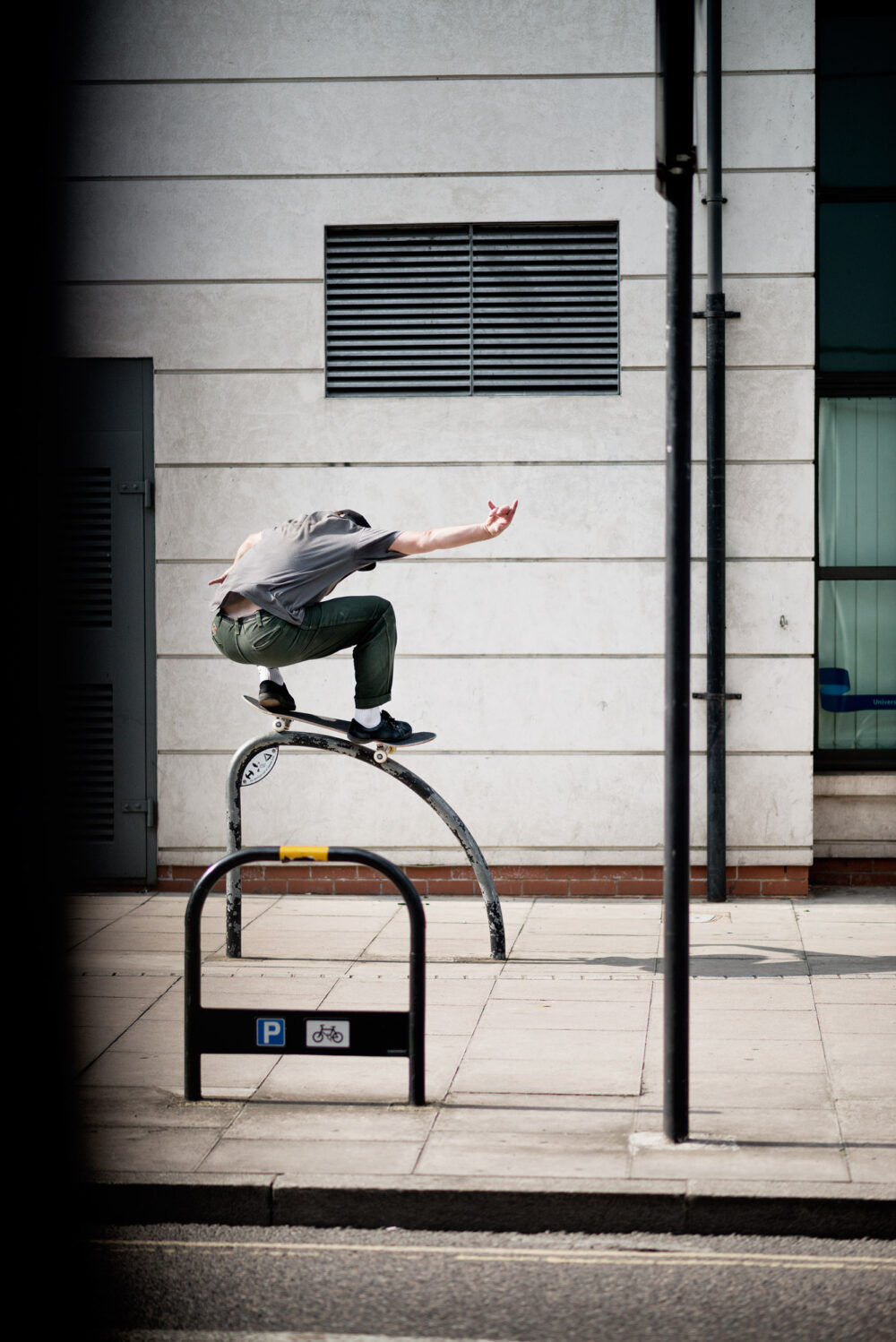 In three weeks you are leaving London to live in Cape Verde. Tell us about that.
A lecturer from my university offered me a paid job working in sea turtle conservation in Cape Verde as a research assistant. I’ll be there for six months. It’s going to be quite a change from London – I’ll be spending a lot of time on a beach – but I’ll still be skateboarding, probably more than I am now because I will have more time.

Are there skaters there?
I’ve found one video on Facebook of a skater and a scooter kid at a little skatepark on the island I’ll be living on.

What will you actually be doing out there, skating aside?
Going out looking for nests, helping to ensure eggs don’t get stolen and trying to stop turtles being poached by locals when they come up on to the beach.

You mentioned armed patrols at night. Will you have a machete?
I won’t have a machete, but apparently other people will. That could get a bit scary. My lecturer said to me: “Sometimes you come across some confrontation when someone is trying to make turtle soup and you’ve got to stop them”.

What are your longer-term plans?
I’d like to stay working within conservation, but it’s fairly seasonal work – you kind of move from project to project. Straight after Cape Verde, I want to go to San Francisco again and stay with the people I stayed with at Easter. I’d also like to do a Borneo trip. I think London will always be my base that I come back to between conservation projects and any trips I get to go on. I’m pretty happy in London, I have a lot of good pals.