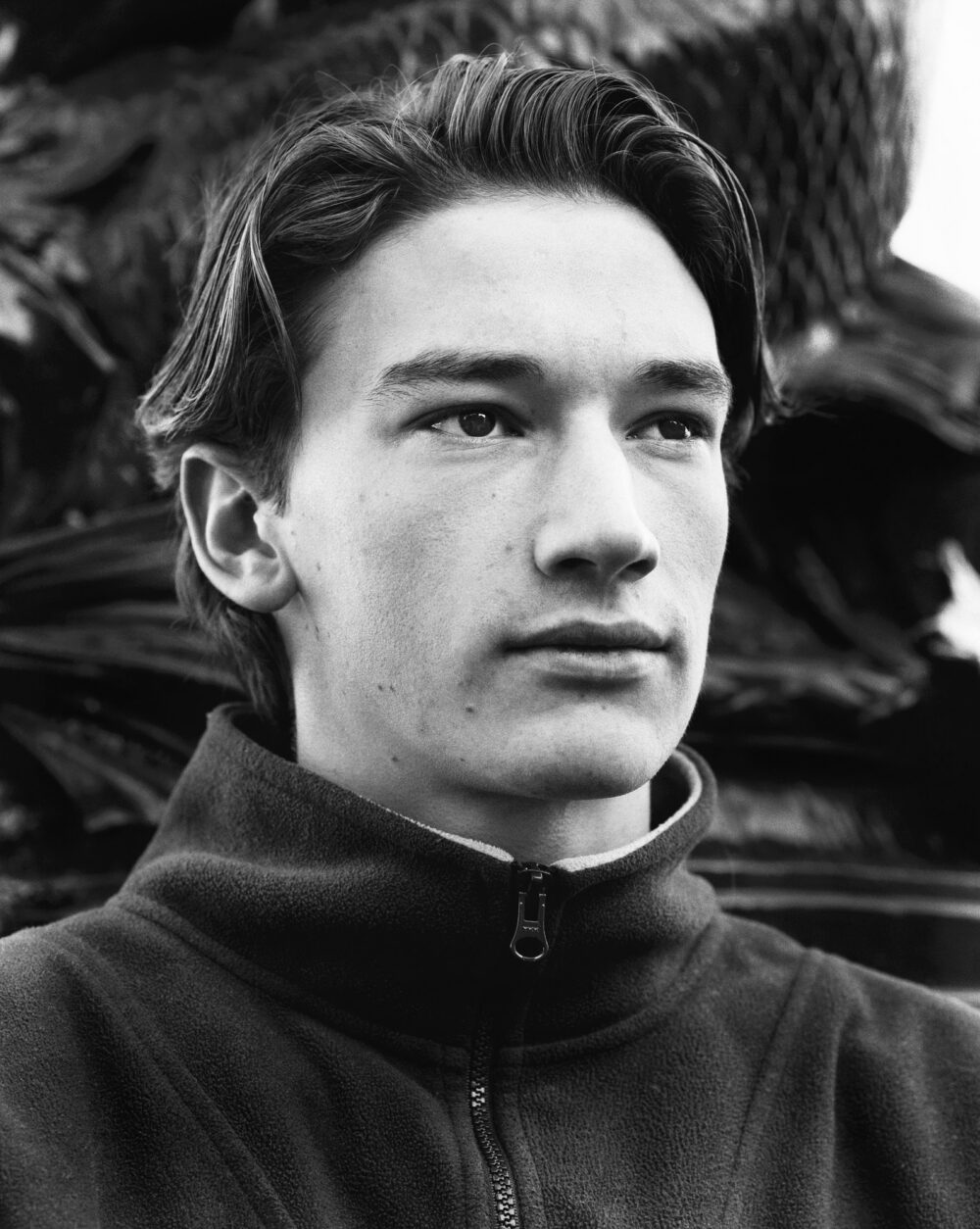 Who are your sponsors?
Alien Workshop, Venture and Theobalds Caps.

Tell us about growing up in Winston Churchill’s old house.
I lived in a house called Hoe Farm, which is in a tiny village called Hascombe in Surrey. That’s where I grew up until I was about seven. Winston Churchill lived there during a dark stage, when he had bad depression I think. He did all his painting when he lived there. The house is also haunted.

Did you have any direct experience of that?
My family saw loads of things go down. We had a bed and breakfast that was fully booked all year round. We always had people staying there.

Was that because of the history?
Yes, people would come from far and wide, from all over the country and even abroad. The house is quite widely known as being haunted. We had this one room that we called the yellow room, which sounds a bit sinister, but it was just because the walls were yellow. That was where lots of people experienced stuff. Lots of film crews came and set up all kinds of devices trying to capture it and everyone experienced something. We never said anything when people came to stay, but the next morning at breakfast they would always talk about a funny experience they
had had and ask if it had happened before.

Were there common things that different people described seeing?
Yes, lots of simple stuff like opening and closing windows around a certain time. There was this raised corridor connecting two parts of our house and people would feel a chill walking through there. A few different people reported hearing a girl scream, then passing out. I think that happened to maybe three people. They said that they heard something, then fainted. 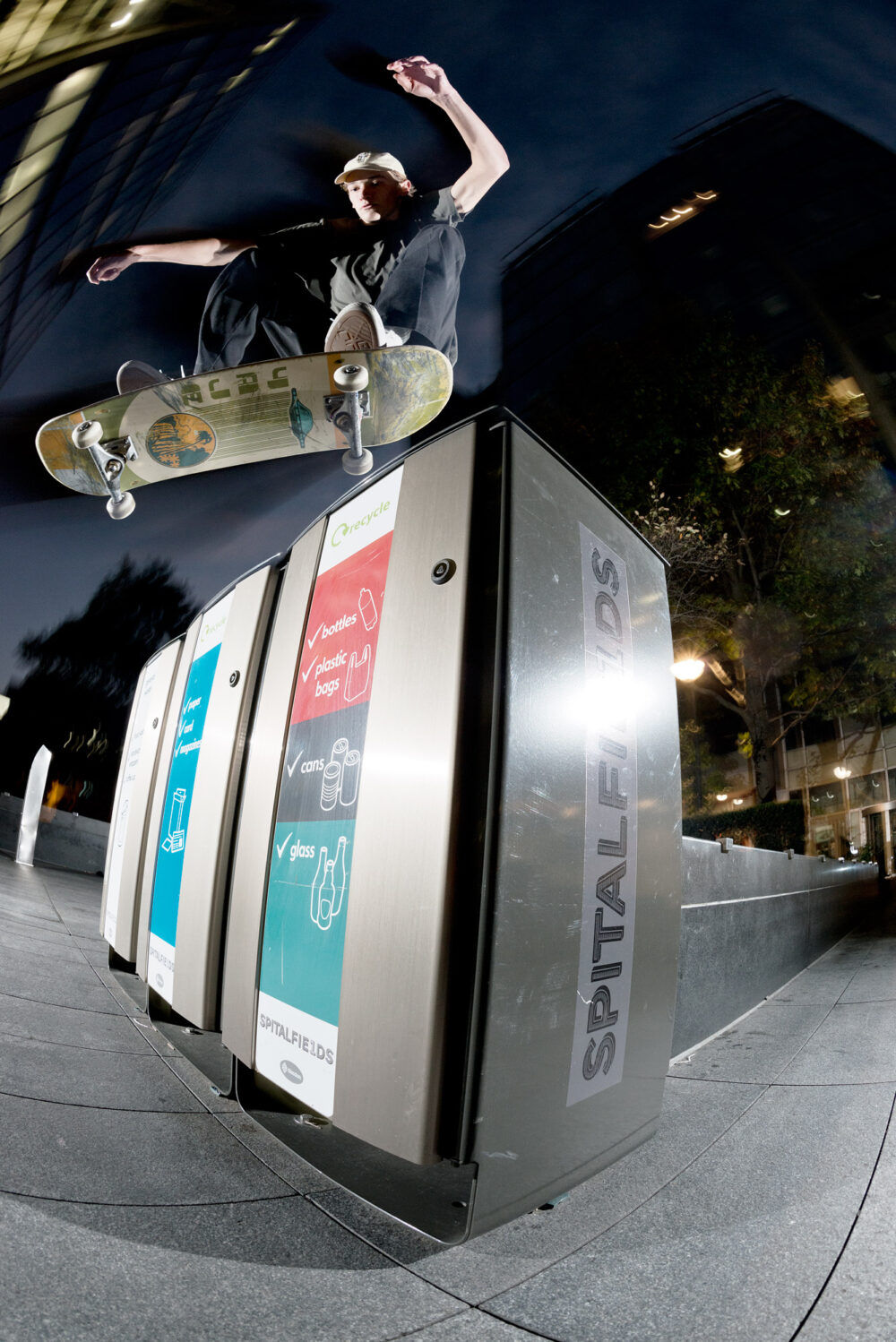 Wow. Aren’t you a distant relation to Lord Byron?
Yes, very distant, on my dad’s side.

What do you know about him?
He was one of the most famous romantic poets. He was also known as a bit of a womaniser. My sister is actually really interested in our family history, so I know a few things to do with my heritage through her. She even got this book called Flight of the Gordons, which is all about the family tree. It’s quite funny.

Mark (Burn, filmer) mentioned that skateboarding helped you overcome anxiety when you were younger. Can you talk a little about that?
Yes, absolutely. So when I was about 12 I skated a little bit here and there – we always had a skateboard at the house – but I was never that into it because I was so focused on playing football. When I was about 14 or 15
I left school because I had anxiety. I stopped playing sports, stopped going to school and was home tutored. It was that summer that I got out my old skateboard and started doing it every day. It was easy to skate at home, pretty relaxing. I was skating every day before and after tutoring and through the weekend. I started going to my local skatepark, which was only five minutes from my house. The culture of skateboarding and meeting all these amazing people really helped my get out of that anxious state – I was way better within a year. I have never gone back since. I haven’t played any football, I just got addicted to skateboarding and to the hype and positivity around it.

So you would recommend skateboarding to someone in a similar situation?
Yes definitely. I think skate-boarding and the people you meet… it’s all so friendly and relaxed. A lot of other sports – well, skateboarding isn’t really
a sport – but things you get taught at school like football are quite forceful, if you know what I mean – there is a whole regime and schedule around it. I think the freedom of skateboarding is great, especially if you like being on your own and don’t like being told what to do. 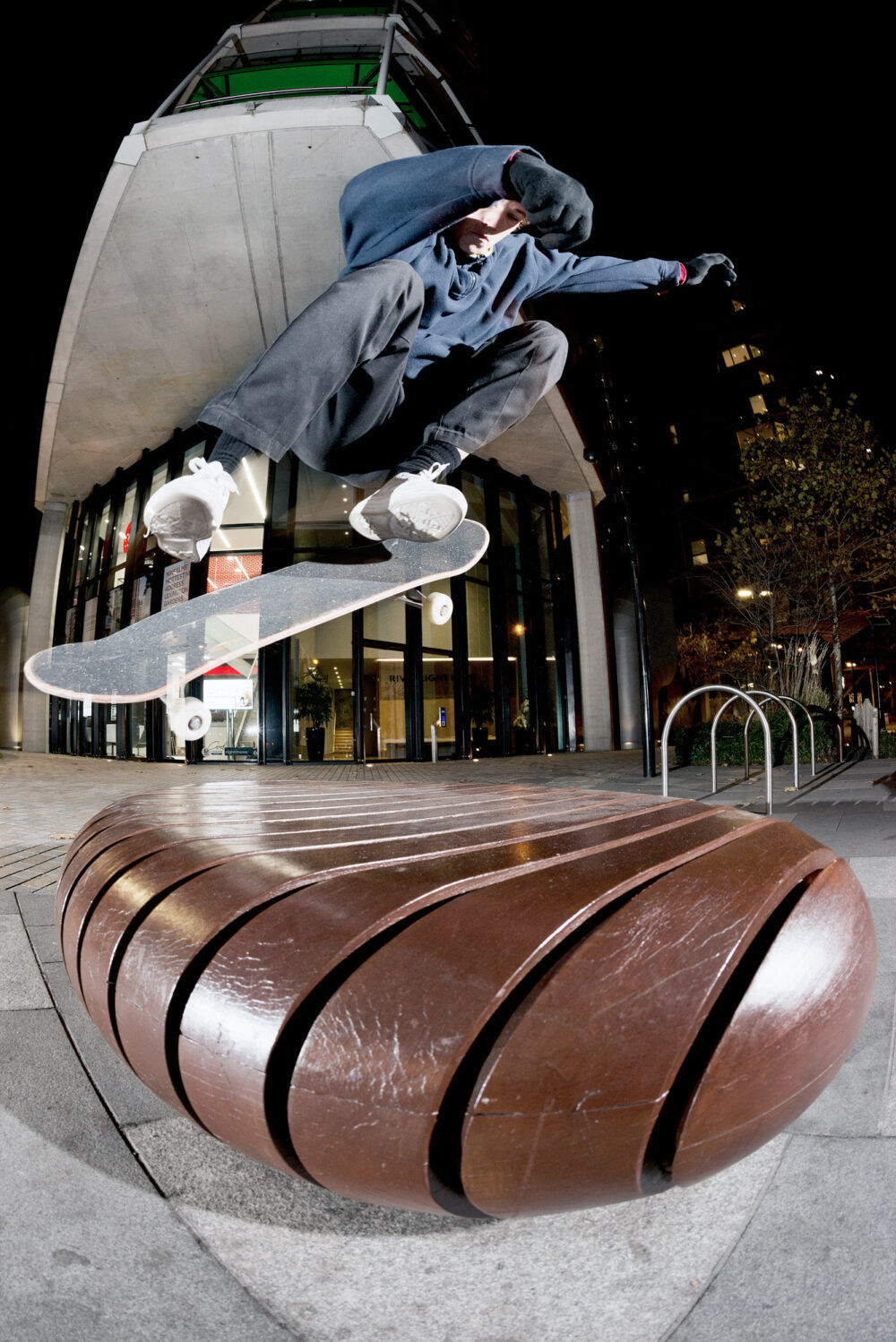 How is the skate scene in Guildford these days?
When I started skateboarding the scene was quite strong. There were older guys who were pushing it, killing it every day at the park. But since those guys migrated to London, the scene hasn’t really been pushed that much. There were a few kids, but I’d like to see more coming out of Guildford because there are lots of really cool spots.

You skate in London most weekends, often arriving early. Tell us about these missions.
I really enjoy setting an early alarm at the weekend and heading into town with Mark. We usually meet between 6.30 and 7.30am and get up to London for around 8.30. Getting to a spot early means it’s usually pretty empty. You’re more likely to get multiple clips throughout the day because you get a bit of momentum in the morning. It’s nice to be up and out while everyone else is asleep.

Do you ever stay in London?
Yes. I have four sisters and a few of them are located in London, around the Clapham area, so I can stay with them. That way it’s easier to skate early. It’s also free, which is pretty good.

Any plans to move here?
Nothing set at the moment, but in the future I’d definitely like to move there and be more involved with the scene and get to know more people. At the moment it works quite well living at home because I don’t have to pay rent and I live close to Mark, so we can always meet up early and go to the spot of our choice. I really enjoy being outside London and not feeling tied to one area. I think if I lived in London I might just end up skating the area I lived in. It’s nice to look at the whole city as a playground, to come in from outside and go anywhere you like.

Whose skating inspires you?
Definitely Nick Jensen. He’s got an amazing, unique style. I love doing nosegrind nollie flips because of him. Mark Suciu, Anthony Pappalardo, Bobby De Keyzer… those are just a few. I could go on forever, but those are the main guys.

What about your favourite video or video part?
I think Mark Suciu’s Cross Continental part is amazing. He does 180s in and out of almost every trick the hard way. It’s so interesting to see tricks you don’t usually see. 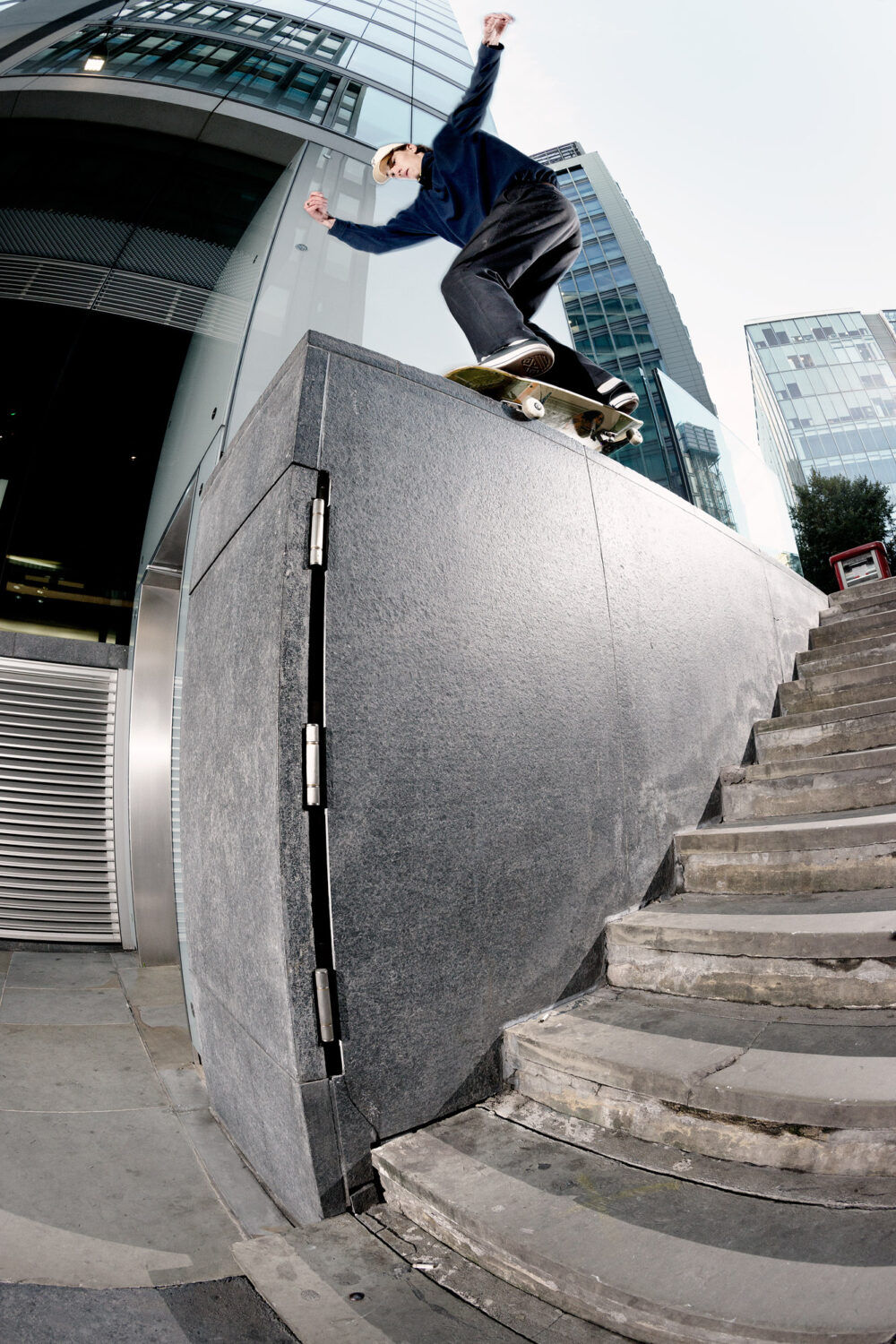 Do you mind talking about your work as a model?
I do it a bit here and there. I enjoy it, but it’s a funny industry. It’s good just to dip in and out of, to earn some money and meet people.

Would you like modelling to be your career?
It’s quite flexible and it’s all London-based. If it works alongside skateboarding then definitely, but I’m more into skating so that takes the front seat.

Mark mentioned you work on film sets sometimes. Tell us more about this.
My girlfriend’s mum is a head hair and make-up artist and she gets to choose her assistants, so I do that every now and again. I don’t want to go near anybody’s hair, so I just make the teas, eat free food and watch skate videos. It’s pretty relaxed. It’s just a bit of extra money here and there.

What are your longer-term plans for the future?
I guess just to keep skating as much as possible and try not to
let anything else get in the way. I’d like to move to London at some point, like I said. I want to keep filming with Mark, keep trying to put out regular videos and content… and just enjoy it really and have fun.

So skating is definitely your main thing for the time being.
Oh definitely, by far.