Back in January 2015 we published a short interview with Bobby Pecotic about the Young and Laced mentor scheme, which aims to help young people pursue their creative interests and goals in a variety of fields. One year on, we are pleased to publish this interview with one of Young and Laced’s successful 2015 applicants Mikey Krzyzanowski, whose project Goma Collective has been gathering momentum with the help of mentors Bobby Pecotic and Jerome Campbell. Find out more about Young and Laced and Goma Collective below. 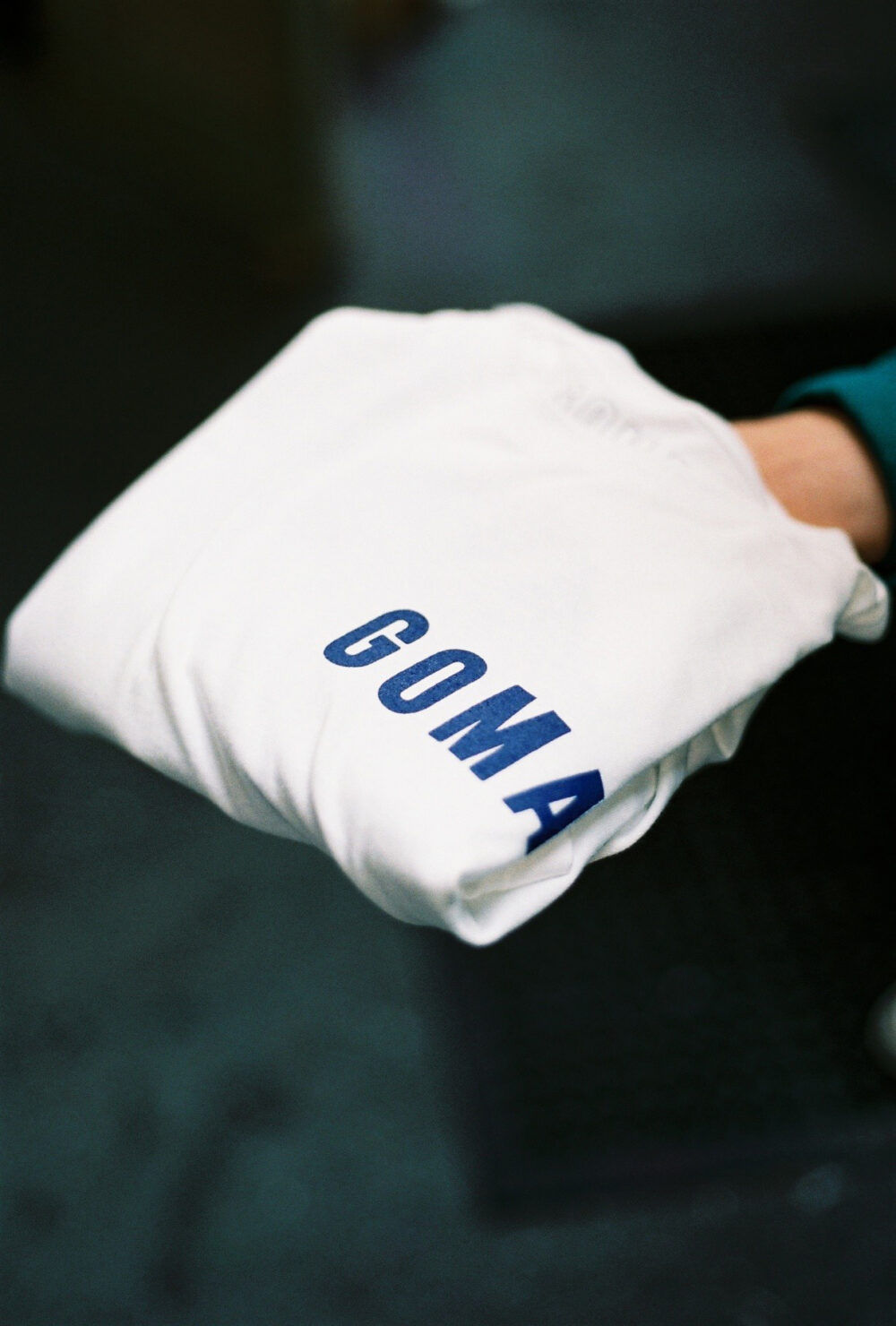 How did you become involved with Young and Laced?
Jerome (Campbell) posted about it on his Instagram. I sent in an application, had a couple of interviews, then got a call about two weeks after saying I was in.

Can you tell us a little about the Young and Laced programme?
It’s a collective of young creatives. There are 12 of us in total: photographers, illustrators, filmers, DJs… A lot of us skate too, so I’d say that’s something flowing through the collective.

Did you apply with a specific proposal in mind?
No I didn’t have anything too specific in mind when I applied. I had run a little T-shirt company with one of my mates before and I wanted to do something similar, but not just another brand. Goma has been developing slowly. I think it’s better that way.

Who were your mentors?
Everyone has helped me in one way or another but Jerome Campbell and Bobby Pecotic have really gone out of their way. Jerome has definitely helped me find the right direction in which to push Goma and Bobby helped me keep things running whilst I was in Brazil.

More specifically, what sort of support and help did they offer?
Getting their opinions on different pieces of work has been the most helpful thing. They’ve also helped with contacts when I’ve been really stuck with different issues. I’ve learned so much in the last few months, I feel like I’m in a position where I can sustain things myself a lot better than when I started out.

Tell us about Goma Collective.
Goma is my project through Young and Laced. When I wrote out our ethos, I described it as a collective of skaters, illustrators and other creative heads. I’d say that’s as accurate as I can pin it down to in one sentence. I’m trying to slowly bring together a few people whose work I’m really, really hyped on and make things with them, whether that’s a short film, a board, a screen-print or something else.

The mentors made it clear that their goal was for us all to create something we are stoked on. They weren’t pushing us to sell a certain amount or have loads of people attending our events or anything. That set me on a really good path with Goma. Everything so far has happened organically in the sense that I’m not under any unnecessary pressure to make it blow up overnight.

Who is in the collective at the moment?
It’s still early days. I’m working with different people to see how they collaborate with each other, but the three people who are definitely in are: Gaurab Thakali, Tom Caron-Delion and Sonni Rossi. They all worked on the first series of products. Gaurab is the illustrator behind the print and the board, we (Mikey and Gaurab) worked on the T-shirt design together, Tom photographed the process and Sonni filmed it. Other people that have been getting involved are Danny Jules and Ellis Doig, however I’m not putting people up to jobs if I don’t think their background or style of work suits the artistic direction of that project. There will definitely be other people working on different projects in the future.

How do you choose new artists to work with? Can people submit work/ideas?
I’ve been keeping my eye on a few people I think I may want to work with on future projects. It’s a little tricky because although I may love someone’s work, I don’t want to throw them into a project that doesn’t mean that much to them. I’d say that the direction for a series of products comes first, then I’ll try to match an artist too it.

I’m definitely open to ideas. I try to give people flexibility when they’re creating things for Goma, be it photos, films or illustrations. A good example of that was Sonni’s first film (Chronicles of London 005), for which he filmed us creating the first set of screen-prints. It was way totally different to what I had in mind, but it worked out better just letting him do his thing.

People can email me if they’ve had a read of the ethos and want me to look at their work: [email protected].

Sustainability is at the core of your project. Can you talk a little about this?
I’ve been pretty inspired by Yvon Chouinard. He’s the guy who founded Patagonia. I got given his book Let My People Go Surfing and that changed a lot for me. I think it’s getting too late for people to still be viewing sustainable products as niche. It sucks that brands have to shout about it if they are doing it, but without that I guess fewer people would follow and do the same. People making clothing and skateboards are always going to damage the environment one way or another, so it makes sense to focus on making what you’re doing less harmful. For example choosing to make Goma T-shirts with organic cotton isn’t making the process completely sustainable, but it’s definitely causing less harm to the environment. There are a lot of brands doing good things out there already, but there are also lots who are still making their products as if nothing’s wrong.

On your site you mention taking influence from Nepal and Brazil. How do these trips influence Goma? Doesn’t travelling so far for inspiration conflict with the sustainable ethos?
I just got back from two months living and working in a place called Rocinha in Brazil and Tom and Gaurab just got back from a month traveling around Nepal, skating and working on their photography and illustration.

The main way my trip influenced Goma relates to the quality of the product and also how much we’re making. In Rocinha I saw people living within their means. They weren’t spending money on a lot of the things that we do in the UK. Just because they wanted something didn’t mean they needed it. The world would survive without more skateboards or T-shirts or screen-prints, so if I’m making them, I might as well make my product worth people’s money.

I don’t want to over-produce things either. When we get together to make products, it’s not about selling as many as we can, then moving on to the next thing. I want to make something that has a lot of value to whoever owns it. That’s why I’m only making three products per drop and keeping quantities low.

Nepal influenced the design side of things a lot too. We’re releasing a collection of products using the line drawings Gaurab created whilst he was out there. Tom and Gaurab are also making a publication based around their trip. I got shown the mock-up the other day and it looks amazing.

As for the trips conflicting with the ethos, I guess we had to go a little bit backwards before we could make progress. You’re right: flying to these places definitely wasn’t good for the environment, however we couldn’t have achieved what we have without doing that. By staying in those places for a long time we were all able to understand the communities better and build genuine relationships with the people there. We couldn’t have done either of those things without being there in person. Now all of us feel that we understand what these people need to help their local scenes develop and keep growing. For example the guys in Nepal need new boards rather than money, so we plan to send them product for their skate comps. That will be covered by the 5% mentioned in our ethos.

When we release the collection based on my trip to Brazil, the community project we’ll be helping is a surf school in Rocinha that has got loads of kids from the favela surfing. Both of these scenes/projects we’re supporting aren’t asking for donations online. Now that we properly understand them, we can be way more way more effective in the way we help rather than just sending a cheque.

Run us through what you’ve made so far and what you plan to make next.
So far we’ve made an A2 screen-print, a T-shirt and a deck. Next up for the Nepal products we’re making another garment, a deck and a print. I want to make something a little warmer than a T-shirt, but using organic cotton definitely isn’t making things easier. The launch of Nepal collection is going to be really good. Tom and Gaurab are putting on a show called Thik Cha and we’ll be turning part of the space into a Goma pop-up shop.

Talk a little about the boards. Where are these made and are they intended to skate, or more as collectors’ pieces?
The boards are printed in North London on blanks that are made in the US. This is actually something I’m trying to change as soon as possible. Bamboo grows really fast compared to maple, so it’s not as bad to cut down. People have been making boards out of it, but it hasn’t really caught on yet. I’m in contact with a few people at the moment and I’m hoping to be printing on bamboo blanks for the Brazil series.

I definitely intend for the boards to be seen more as collectors’ pieces. We made 30 and they’re never being made again. I want people to feel like they have something a little special when they get one.

How do you see the Collective developing in the future?
Next year there will be lots of positive changes and the Collective will start to really grow. I’ve been trying to get things off the ground for the past six months and I’ve had to accept everything isn’t exactly how I want it to be just yet. It’s a big learning curve. In the future I think we’ll be in a position to do more than give 5% of our sales to community projects. I’m looking forward to that a lot.

How can people buy Goma products?
From the 21st-24th of January people can come and see Tom, Gaurab and myself at Thik Cha at the Embassy Tea Gallery, 195-205 Union St, London, SE1 0LN. I’ll have a pop-up shop there and you’ll be able to see the photos and illustrations that Tom and Gaurab created during their time in Nepal.

If you want anything before then, you can only buy Goma products in-store at Beach, a gallery and shop at 20 Cheshire St, E2 6EH. 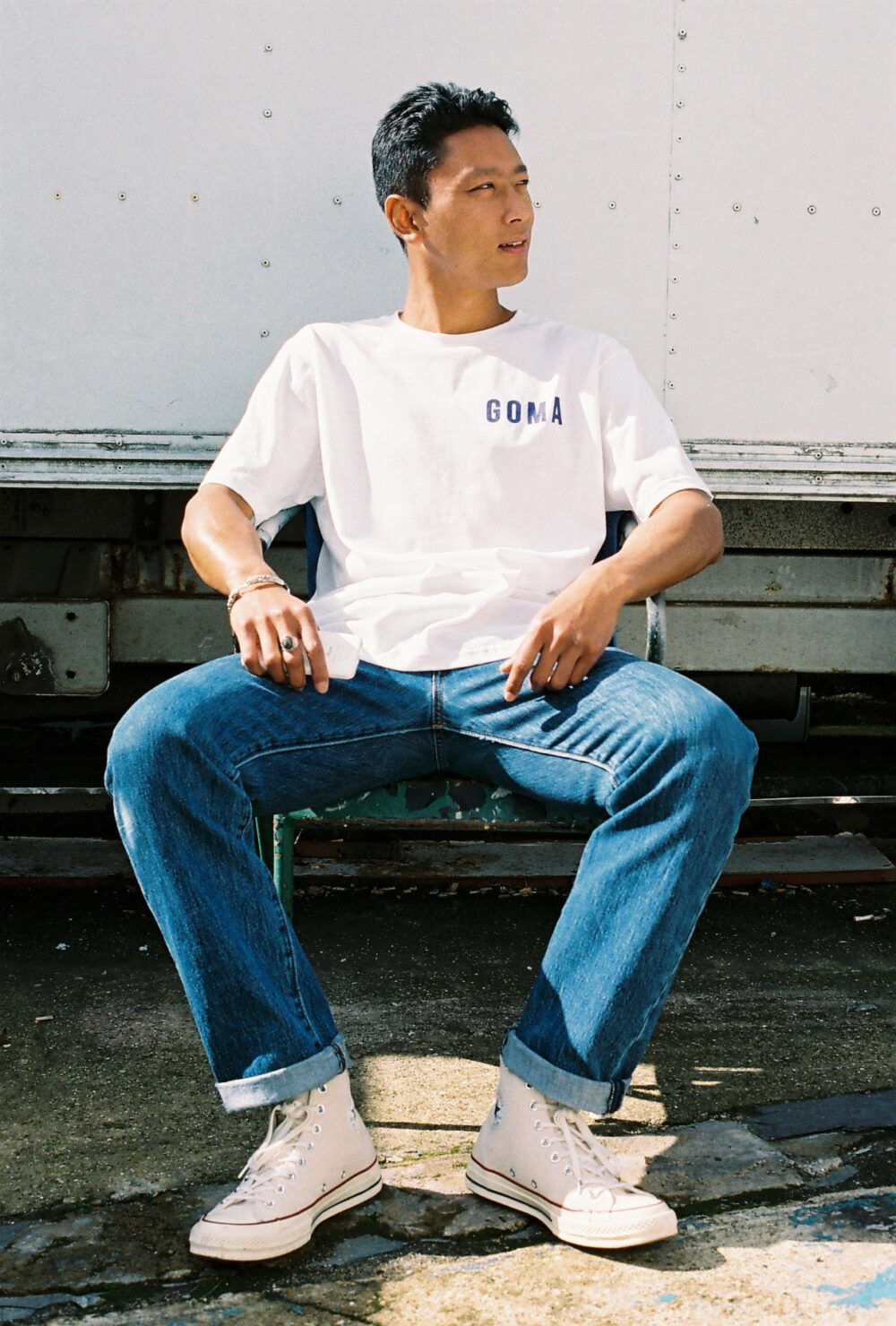 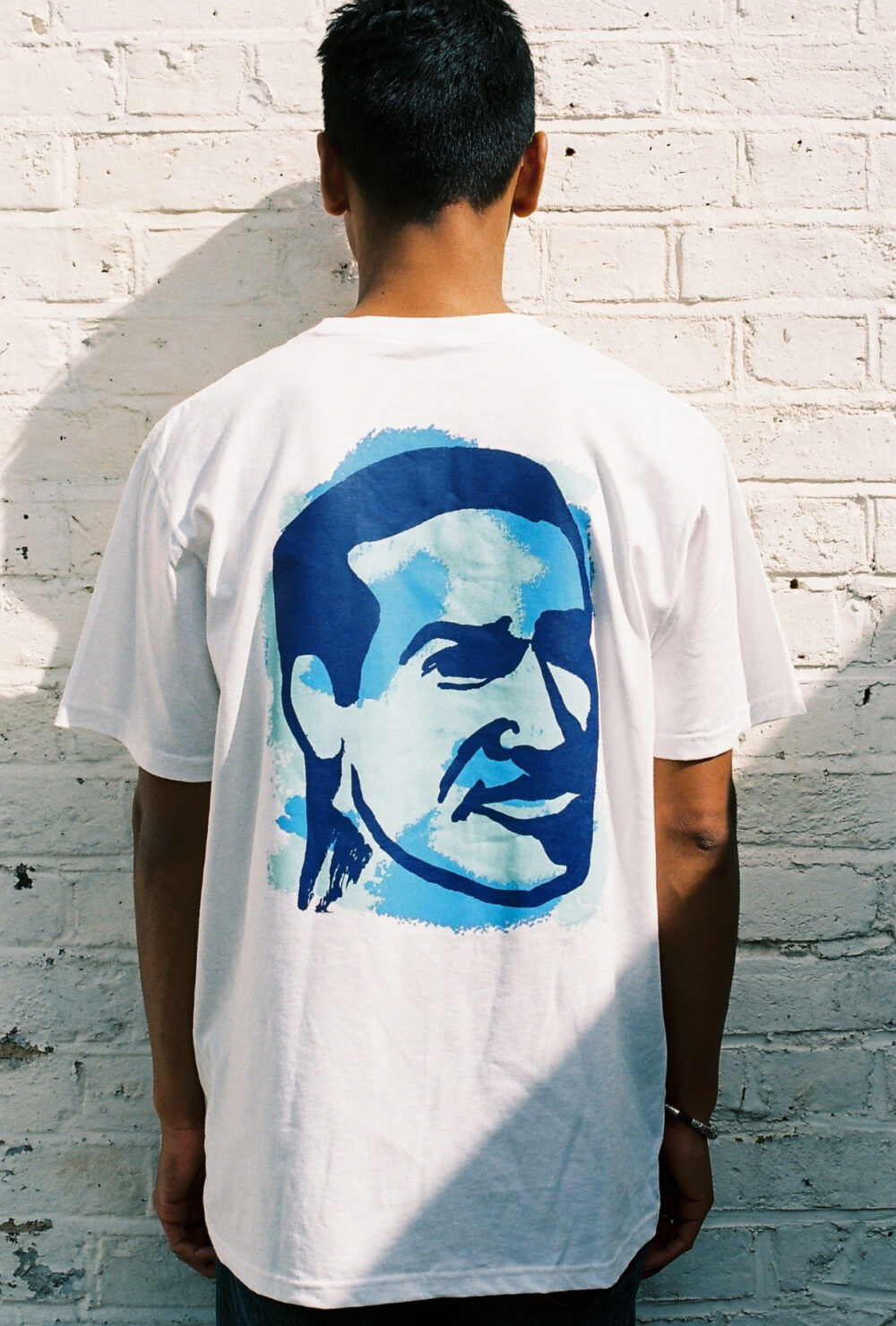 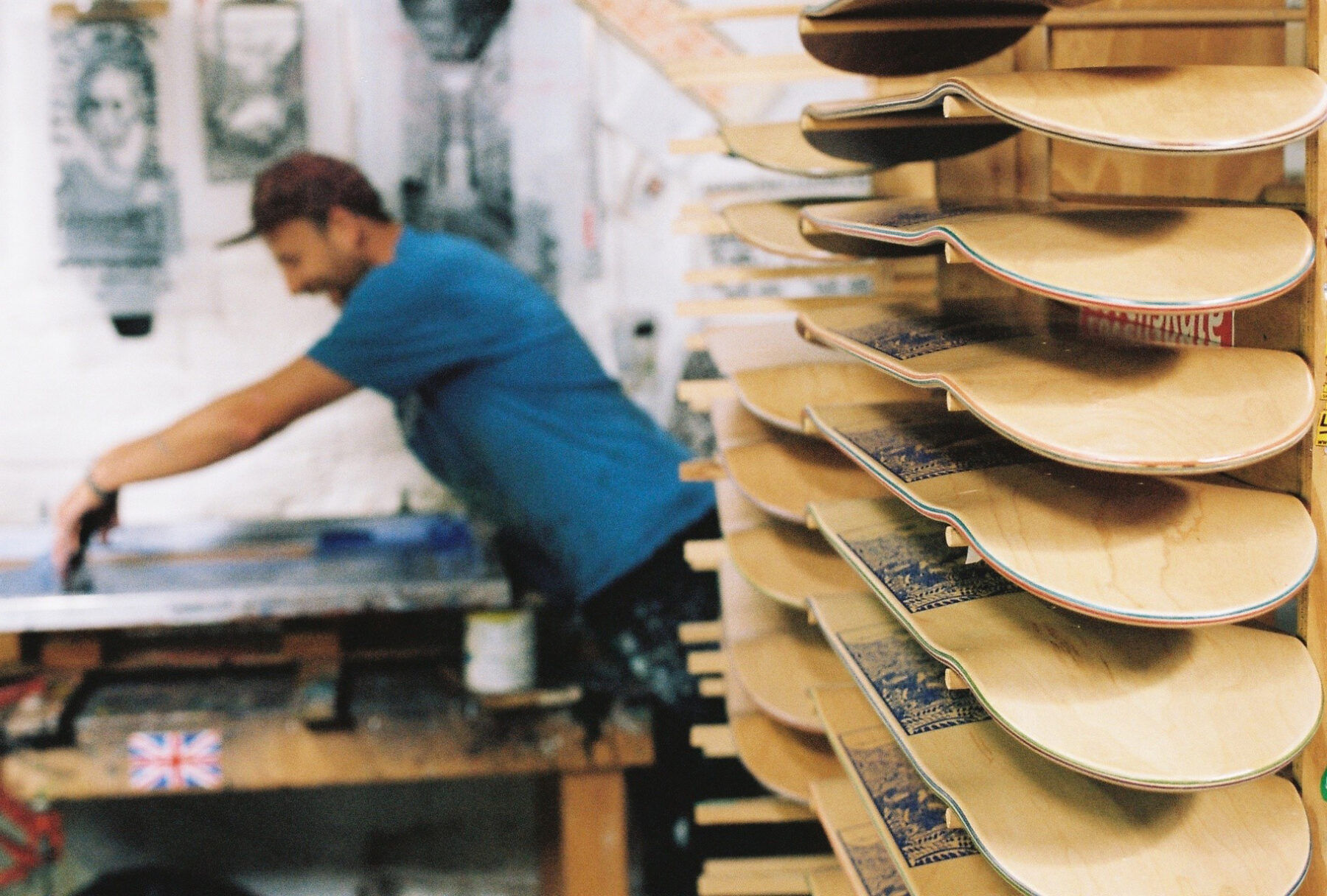 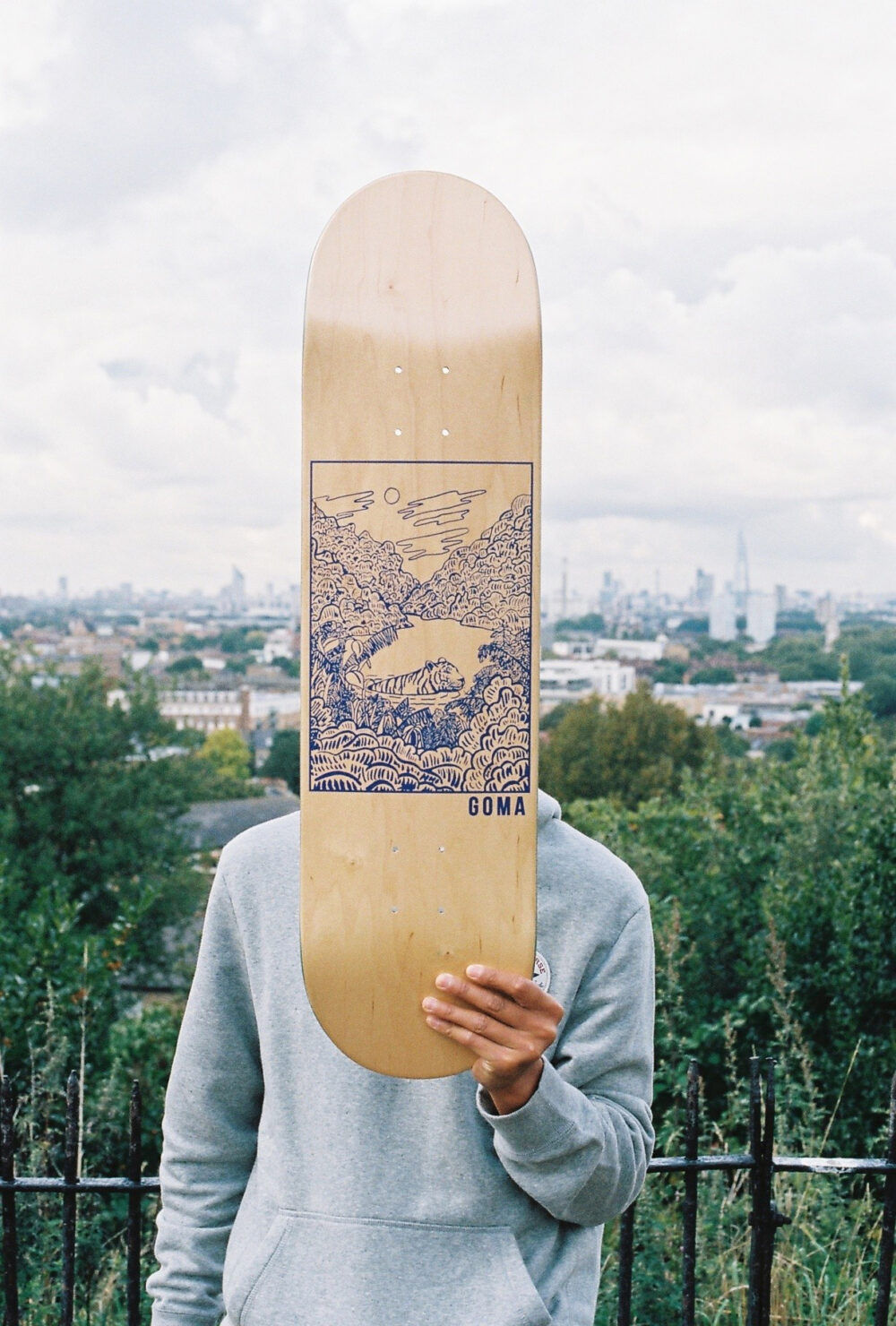