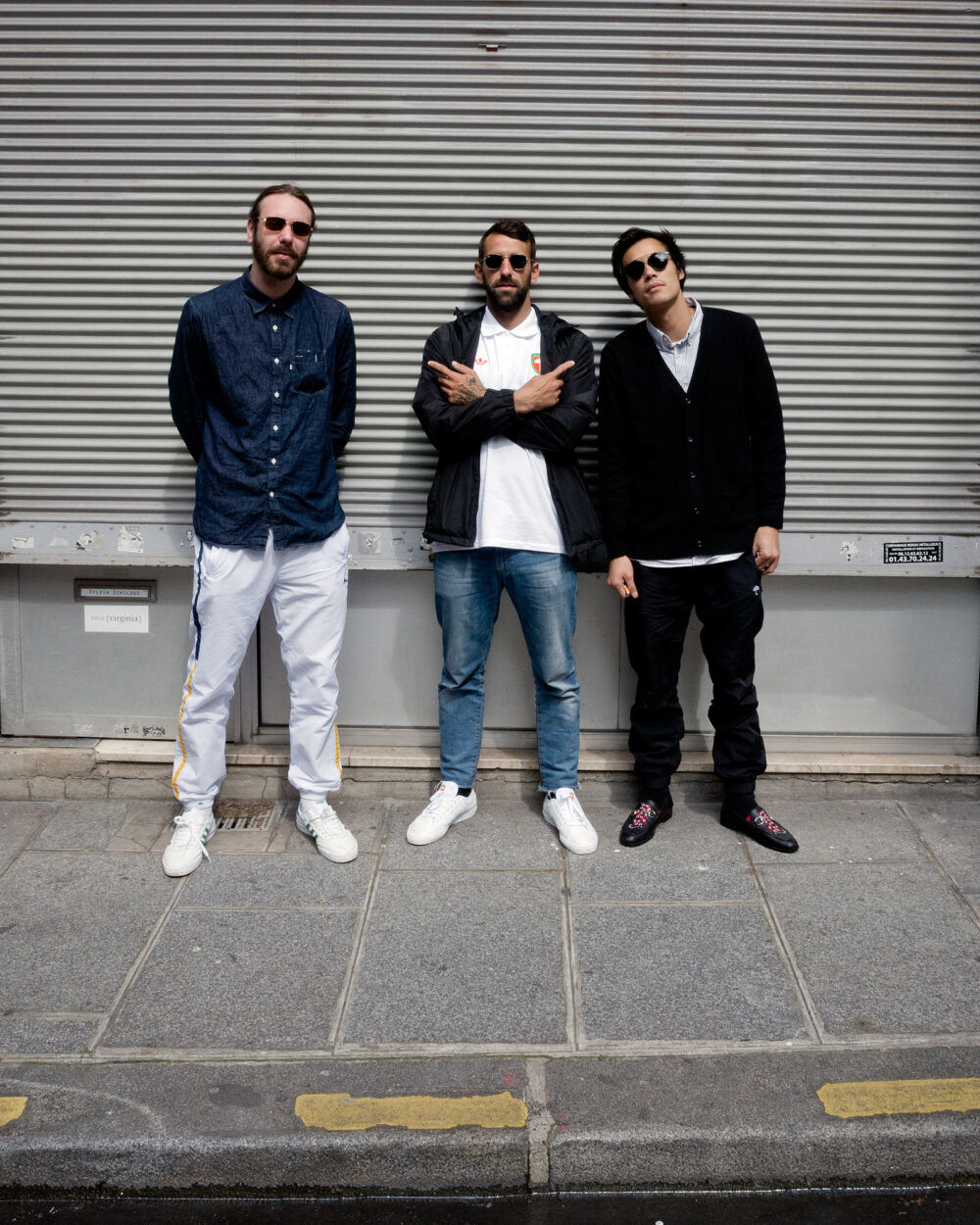 We caught up with Hélas founders Stephen Khou, Clement Brunel and Lucas Puig in Paris at the launch of their new collaboration with Adidas Skateboarding for a quick chat about the origins of the company, being your own boss, the new collab and how tennis players look like shit in 2017. The Hélas x Adidas Skateboarding collection is in shops now.

How did Hélas begin?

SK – I mean it began in 2011, when we were all in London, before I left for Shanghai. I met Clem in London and I had known Lucas already for a really long time. We worked on the project for a year before the launch. That was 2010 and we launched in 2011.

So you were involved from the beginning, Lucas?

LP – Yes, we all started at the same time.

CB – It started outside a pub in London.

So you’re all friends from Toulouse?

LP – I’ve known Stephen forever. He moved to London and met Clement, they talked outside a pub like: “Maybe we should do something.” Then Stephen was like: “Lucas, let’s do it,” and we started, right when Stephen moved to Shanghai.

SK –I knew Clem for a year or two years in London. We kicked it for a really long time, then, just before I left for Shanghai, outside a pub, we talked about starting a hat company.

What made you move to Shanghai originally, Stephen?

SK –I just wanted to move, improve my Chinese, maybe do a little bit of business, because there are a lot of factories out there.

LP – We definitely used the chance that he was moving to China to start something because over there you have all the factories. We were like: “If he’s moving there, we need to do something.”

How did you find working on production Stephen? Dealing with factories etc. Did you have any experience beforehand?

SK – No, not really. I was working in clubs and restaurants mainly. We didn’t know that much about the fashion industry, clothing… We learned every year.

You started out making only caps, right?

SK – The project was a cap brand.

CB – At the time nobody was making five panels and we were big fans of Lacoste hats. Only Supreme made them, but they were too big, you know? Not the same shape as ours. For our first range the caps were smaller, they looked more like Lacoste. It was the right time to do it because soon after, lots of companies did five panels. We were one of the first.

When did you guys decide to start making clothes? That’s a big part of Hélas now, right?

LP – After doing three or four collections, we were like: “We need to do something more,” because you do different hats and stuff, but it’s kind of limited. I mean why not, you know?

SK – We started with some T-shirts then we went into different styles with shorts, tracksuits…

LP – The thing is: not everybody wears hats or beanies. They love the brand, but they’re like: “Mate, I don’t wear hats. Give me a T-shirt”.

CB – You can make a good team by sponsoring people but with hats, we made an army.

I always thought is was cool that the team was so big in London.

SK – It’s all the homies and the friends. We had a lot of British people because we lived in the UK for five years or something.

Is the team still really big?

LP – For sure we will still give some hats to all our friends, but we try to have the team tighter now. If you’re making a video, it’s impossible with so many people.

SK – At the beginning we sponsored a lot of OGs as well and some of them don’t really skate any more.

LP – We definitely tried to tighten the crew.

SK – We do more tours and stuff now, like a real company.

I remember thinking peoples’ packages were very generous in London. People got 20 or 30 hats each season.

CB – That was our marketing.

Who designs your hats and clothing?

SK – Clem does the final patterns for the factories but we all meet up and talk about designs, then, after I go to China, we choose the fabrics and stuff. We work together but Clem does a lot, he does the final designs.

CB – And the different logos. The cut and shape, we work on that together. The colours, looking at swatches, we do that stuff together.

Where would you say the heart of the company is, Paris or Toulouse?

LP – It’s Paris. Toulouse is just where we’re from.

Why did you choose to have the office in Paris rather than somewhere in the south?

LP – I would say for skating, in France, it’s Paris. I mean for sure you have Lyon and Bordeaux, they have good spots, but it’s different here.

CB – Also the rhythm of the city is different. In the south everybody is lazy.

What are the best and worst things about running your own company?

SK – To work for yourself and do whatever you want.

Onto the collaboration with Adidas. How did you find working with a bigger, corporate brand?

SK – It was good. It was good for both companies, I think. It is good for our brand to work with a corporate. It’s hard sometimes having to talk to a lot of people, but they (Adidas) were really understanding about all the ideas we gave, the designs… They were really hyped on all our ideas. It was easy working with them. It went quite smoothly.

Is there a story behind the Tennis theme?

LP – It’s basically the style. You know, back then they would dress like we dress to go skating to play tennis. They would dress in shorts, a little polo. They looked good back then. Now when they go and play they look like fucking… they have the worst style ever. You’re like: “Oh shit, I don’t want to look like this guy.” Back then they were like role models, they had nice clothes.

LP – Kind of like Hélas: hats and polos. So we always liked the tennis fashion, the ’80s / ’90s style, and Adidas has a big history in tennis.

LP – And the colours really work for us, they were made for us. It all came together super easily.

What’s next for Hélas?

CB – Some trips this summer.

SK – We have better collections dropping this year. We thought it would be good to do this collab in the middle of the year, then we’re going to drop the summer collection really soon. We’re going to work on some edits too. It’s going to be a busy year. A good year, a really good year.