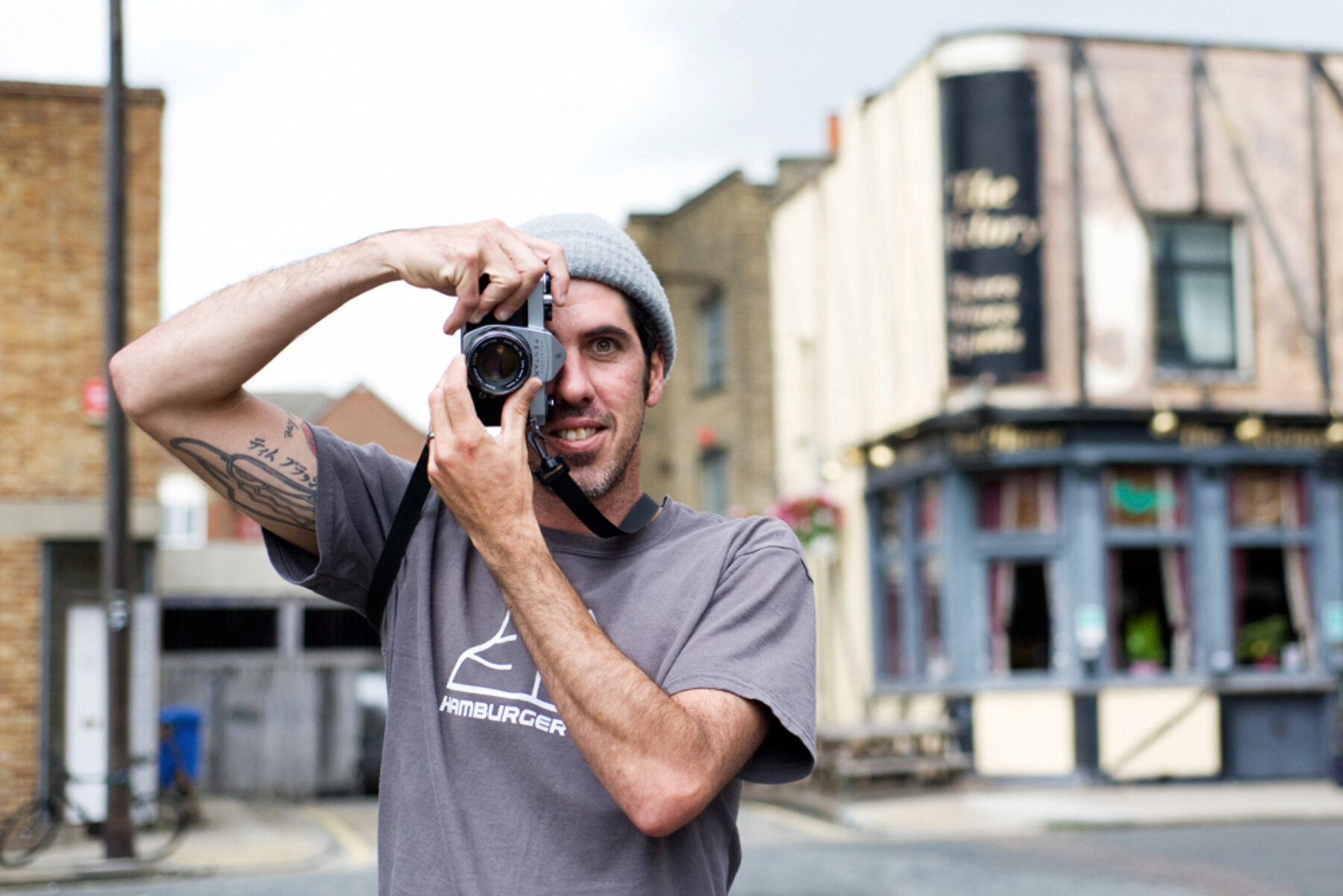 Jai Tanju is a photographer from San Jose, California. He is the man behind Film Por Vida, an international photographic print exchange program. Photographs sent and received by Jai through the program are currently on show at Wayward Gallery in London. We caught up with Jai to find out more.

Can you explain briefly how Film Por Vida works and how it came about?
It’s an international exchange of photography through the mail. So basically you take a photograph and write somebody’s address on it and send it. It’s called the Print Exchange Program because I wanted people to exchange; I wanted people to know right away that this wasn’t me just sending them mail; this was me sending them mail and expecting something back. The whole thing started when Joe Brook sent me a photo but because he never put anything about exchanging, it took me quite a while to work out that I had to send him something in return before he’d send me something else.

The Film Por Vida part was me holding on, it means ‘film for life’, so it was really me holding on to that. Film Por Vida was the title and the Print Exchange Program was the actual group, like the PWBC (Palace Waywards Boys Choir) or whatever. Anyway, back when I started, I just went through and found addresses for all the photographers I could think of, my mom, my aunt; I would send photographs to whoever I knew. Obviously I didn’t expect my grandmother to send me anything back but when I sent things out to photographers I was hoping that they would and people caught on very quickly. I also went on Facebook and asked ‘who wants mail?’ and some people responded and then some of them started to send things back. After about sixth months I was exchanging with twenty to thirty people. Then I made a little zine and put everyone’s address in there – this was before I did the blog – and said ‘I love getting photos from you guys – you can carry on sending me stuff forever – but why don’t you guys send stuff to each other?’ It kind of just snowballed from there.

When I started the blog I started to put up all the mail I got, including the backs of the photographs, so people’s addresses were visible.  You could go to that site and look at a Greg Hunt photo, and if you sent him something then more than likely he’d send you something back. Word of mouth was important too. For example Joe Brook was on a trip with the Alien guys somewhere and Greg Hunt was filming. Joe was sending stuff from the trip – he sends more stuff than anyone else, probably double the amount to the guy prior to him – and Greg Hunt asked ‘what is that, what are you doing?’ and Joe answered ‘it’s the Print Exchange Program; I’m sending photos to my friend Jai’ and Greg was like ‘Oh I know Jai, so what do you do?’ ‘Just send him a photo and he’ll send you one back’. Next thing you know I’m getting these glorious photos from Greg Hunt, with little drawings on the back. He’s a really great photographer; he’s one of my favourites right now. 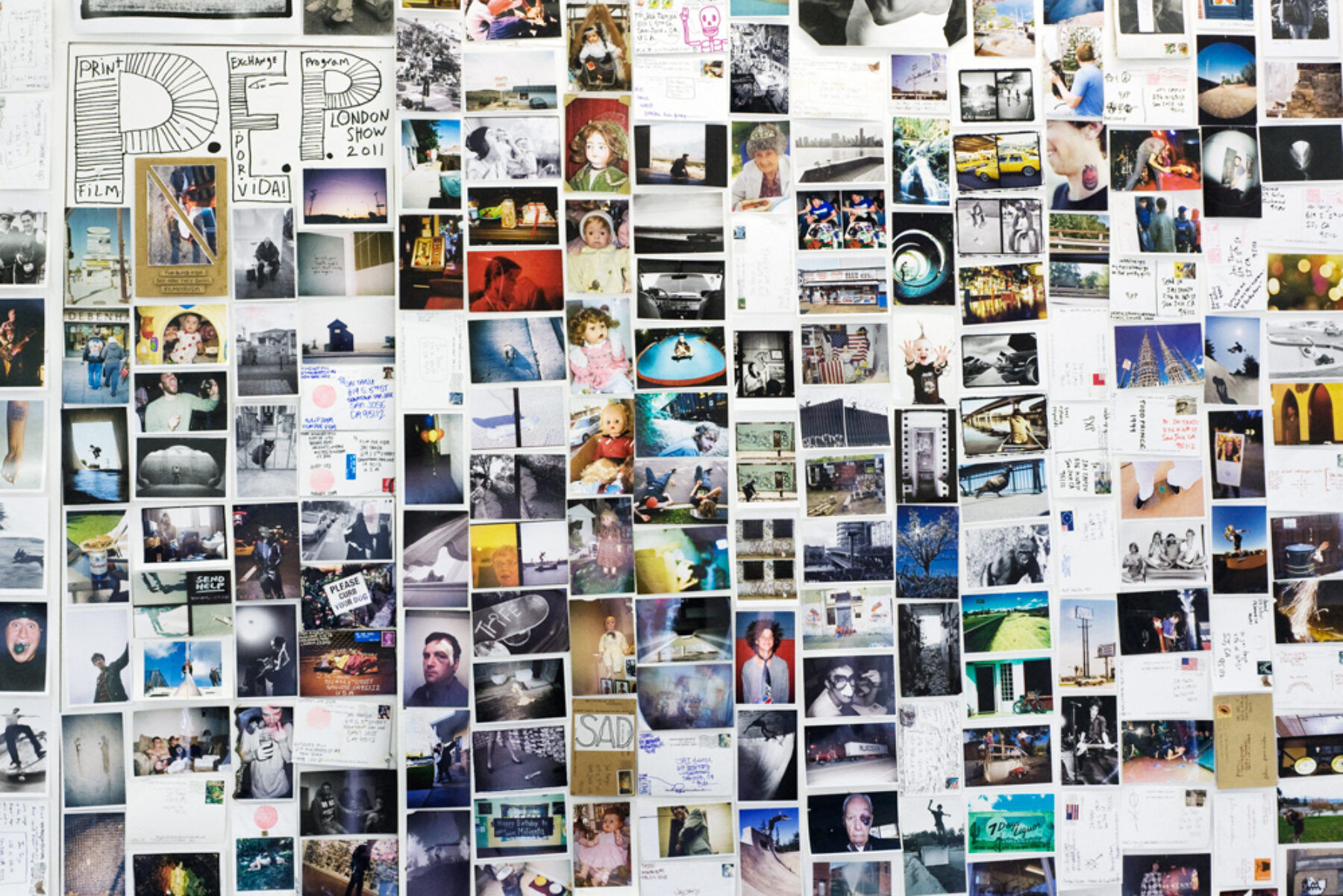 How many photographs do you send and receive on a daily basis?
I receive from two to ten a day and it’s very rare that I don’t get one in the mail. When that happens, I write on the blog ‘no mail today’ and then the following week I’ll get shit tonnes of mail. I used to send out maybe fifty photos a week but it got to a point where I was getting so much back that now I just return mail. Every once in a while if there’s someone I think of who I haven’t received anything from in a while, I’ll dig out their address and send them something. For a long time I actually wrote the number of each image was on the back – you could see how many I’d sent – but then I got kind of over that. I’ve probably sent out about five thousand photos in total.

Is all the stuff in the Wayward show sent or received by you?
Yes, it’s all stuff I’ve received in the mail. I did actually send out an email asking everybody to send one thing of mine back because I wanted to have some stuff in the show as well. I think I got about thirty photos back so I have these in the show.

What is the geographic distribution of contributors like?  Do you receive photographs from all over the world, or mainly from within the US?
Mainly from the US, but I get photographs from all over the world: Japan, Australia, South America, Mexico, Canada, the UK; there’s maybe five or six people out here. The cool thing is that that’s how the show got here, from knowing people through the Print Exchange. That’s how the New York show came about too; I was exchanging a little bit with Angela Boatwright and somebody had offered her to curate a show at their gallery so she decided to have me come out and do the Print Exchange show. I had wanted to do a show, I wasn’t sure if it was ever going to happen. So that was the ultimate; someone just saying ‘do you want to come to New York?’ and then all of a sudden it was really happening. It was so cool because a lot of different people came from a lot of different places to that show; Print Exchange people came from all over the US and Kingsley Ifell and Dan Boulton came from the UK. They really liked it and when they got back Kingsley hit me up and told me his friend has a gallery in London and asked if I’d be interested in doing it there. After this show it’s supposed to go to Australia and it’s through this Print Exchange guy who lives there and after that it’s maybe going to Salt Lake City. I’ve realised this is how it’s working now and I don’t have to hit anybody up about doing new shows; if someone asks me to do it in their town and I can make it then I’ll do it. 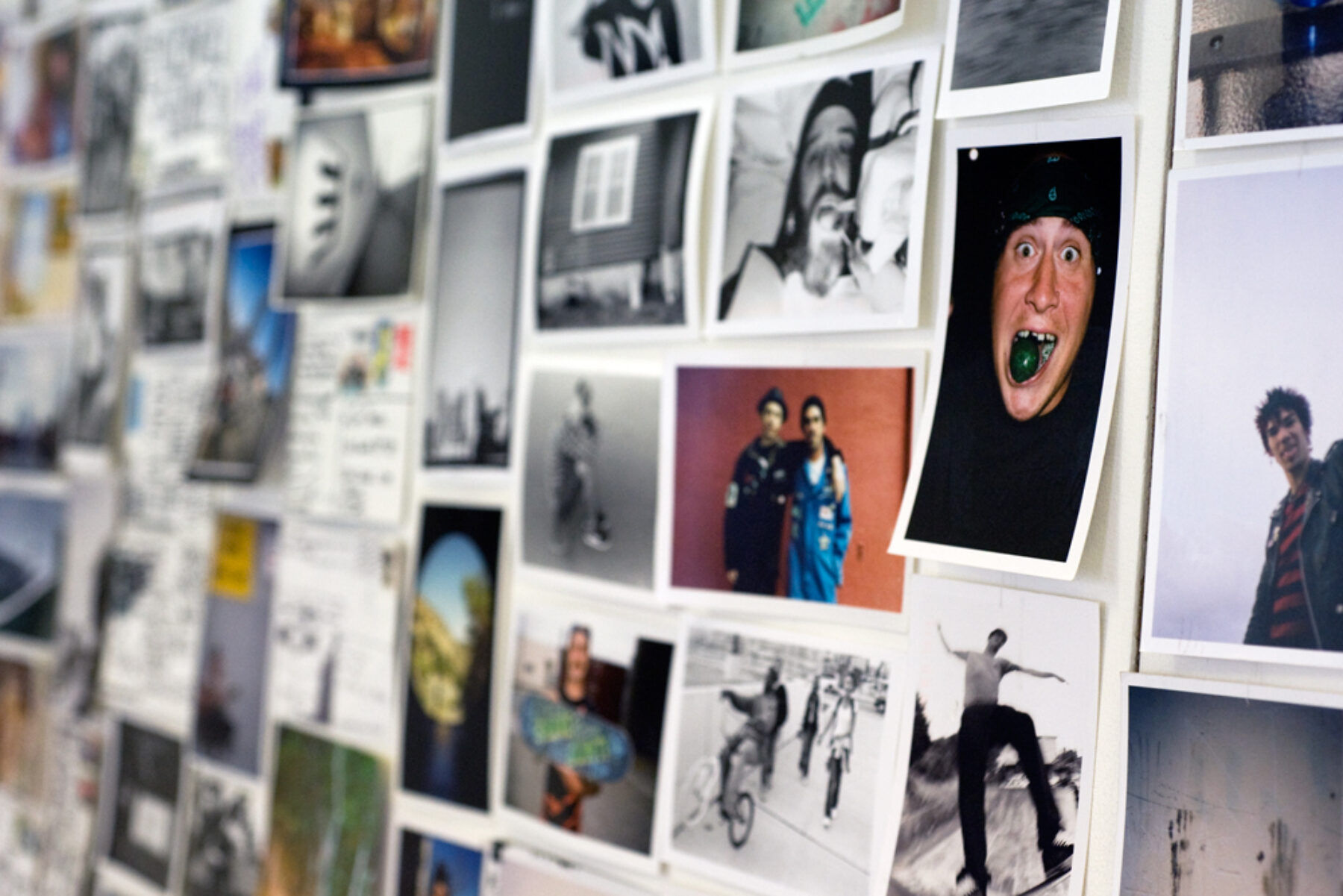 Do you have a favourite image and or participant from the program?
That’s a really hard one; I’ve received so many. It’s hard for me to pick one out. If I had to pick one it would be the photo Joe sent first of all, the very first one, but there’s so many people. I mean Joe Brook is amazing to get photographs from, or somebody like Greg Hunt or Tobin Yelland, or getting something from Bryce Kanights or Ed Templeton; There are a lot of photos here I love. I suppose my favourites are the people who are really into it, like Dave Schubert, Joe Brook and Dennis McGrath. Some of the bigger names I just get one or two photos from and then they kind of go off and forget about it but with people like Joe, it’s constant; it doesn’t stop. He never gets over it. I think Joe is my favourite.

How did you go about curating the show at Wayward? There must be a huge number of images to choose from.
I actually brought everything I’ve received here. In the New York show I actually showed everything! It was a bigger gallery and had some little hallways and things so it was actually set up a little differently to this one. There was a big wall with tonnes of photos on but then I would separate people out so for example Dave Schubert had his own section, and Greg Hunt and Joe (Brook). It was hard for me to decide what to put up for the London show. I had no idea what that gallery (Wayward) was like and I don’t understand anything Kingsley says – I love him to death and he really came through with bringing the show here – but there was definitely a moment when I walked in the gallery and I thought ‘hmm, okay this is a bit different’. I mean there are two cement walls – you can’t pin anything to those – and I really only had one way to set it up, using pins and thread. It actually turned out really great but there was a moment when first I turned up the gallery and Kingsley asked ‘is everything OK?’ It just takes me a little while to figure out the plan.

Was the content tailored to the London location at all?
Not really. I mean I definitely put all the London stuff in one area in the middle; I wanted people to be able to see all the photos from England. I don’t know if people really put that together, but I did want to spotlight the UK stuff a little bit. 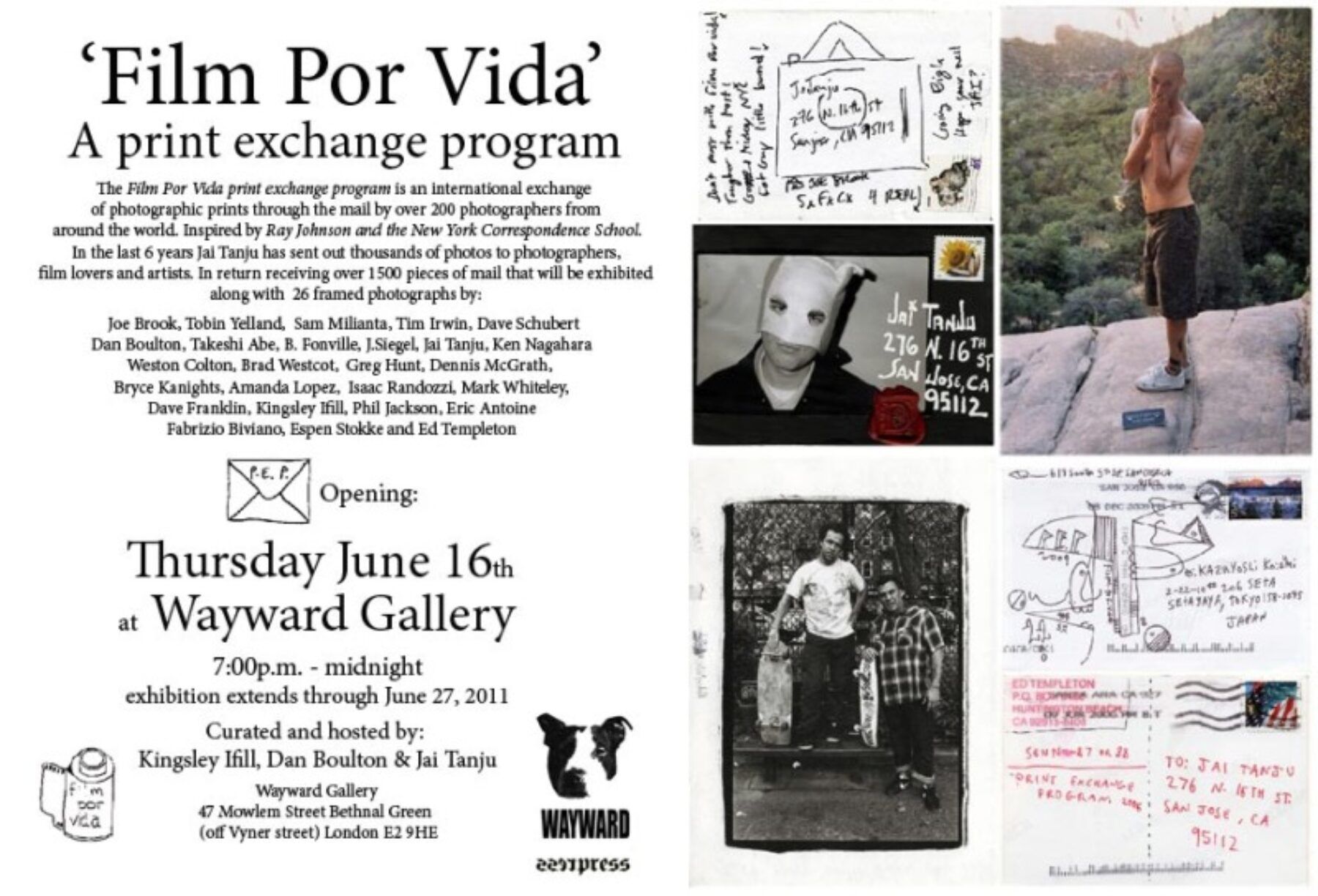 Will we see a Film Por Vida book any time soon?
I put together this little book for Kingsley (Ifell), which he produced. It’s more like a colour zine, but I have some friends in publishing so I’ll probably use that to try to get more interest. It would be really cool if someone became interested because there are lots of things that I didn’t get to put in that little book; it’s sixty six pages and I think I could do about two hundred. The photos themselves are great, but I’m also really interested in the stamps and the little drawings and what people say; there’s so much to focus on, a book would be great. But I haven’t had any luck getting any of my other books published so if anything, it’ll probably be a self-published book that I’ll do myself with a smaller run. If there are any English publishers out there who might be interested, hit me up on the interweb and I’ll make it.

Is there anything you’d like to add?
Well you can always look at the blog, which is filmporvida.blogspot.com. I have all the mail I get on there and information about the Print Exchange Program. I’d like to invite anyone to send me mail; my address is:

I’d like to thank the Wayward Gallery and James (Edson) and all the roommates here, the whole PWBC for taking me in, Kingsley Ifell and Dan Boulton for being there and making it happen and all the Print Exchange Program people for sending me photographs, Angela Boatwright and Fuse Gallery in New York for making the first show happen and of course my wife Blanche Gonzalez and my dog Frida in San Jose, the Tiltmode Army and all my friends back home who’ve supported me as well. I’d just like to say thank you and I’m looking forward to getting mail from anybody.