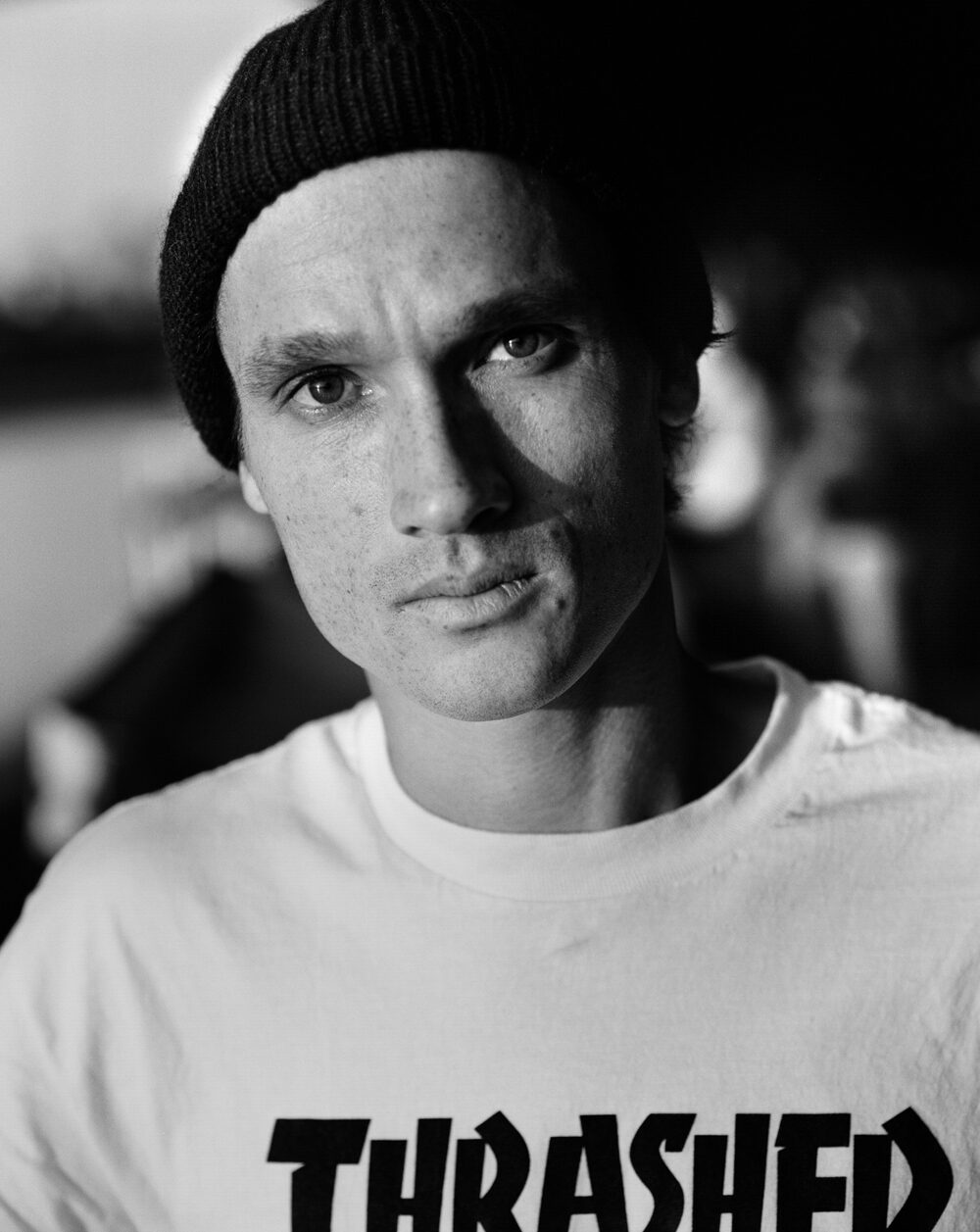 We caught up with Huf and Expedition professional Joey Pepper at the Huf Stoops Euro Tour demo in London for a quick chat about saving Southbank, Boston police, Huf’s new team additions and the winning formula that was Aesthetics.

Is this your first time at Southbank?
No, it’s my second time. I came here probably nine or 10 years ago. It was all open back then; you could go all the way down to the bottom.

Why were you in London back then?
I came here with Rob Welsh. Me and him were filming for Ryde or Die Vol. 01, so It was way back. We came here on our own and stayed with Oliver Barton, when he was still living here. We stayed for four or five days and just hung out and skated.

Do you remember skating Southbank back then?
Yes, it was great. It’s such a unique spot. Every city has its token spot and I think London has a few of them, but this is really the classic grimy spot. It’s like Brooklyn Banks, you know, the same vibe.

Why are well-established city street spots like Southbank important? Does localising these spots give kids something they wouldn’t get from hanging out at the skatepark?
I think any spot that’s natural to the environment can give kids the opportunity to create their own scene. I mean if you go to a skatepark, there isn’t really a scene, there are just people skating. Then you come to a spot like this and it’s an actual scene and it’s got so much history behind it. There have been so many crews of skaters over the years. It’s just a whole different dynamic to a skatepark and it creates different styles. I feel like people have a lot more pride in a spot that is their own.

… and maybe get a bit more experience of city life.
Yes, street life. There’s culture, there are fucking bums, there are crackheads, there are businessmen. You’ve got to learn to deal with people. Skateboarding is supposed to be somewhat of a rebellious sport anyway and it feels better when it’s like that to me. You know, it feels better when it’s real and you’re out there on the streets and people are getting mad at you for skating. It’s all part of it.

Have you ever been a local anywhere similar?
If I had to say I was a local at any spot, it would be Boston. We used to skate the Aquarium there. It was just ledges and stuff, but that was the spot where I’d be any given day, any time of the day. This was before anyone had cell phones or anything. You didn’t call anyone, you just went down there and that’s where people would be.

Do any stories or memories from the spot particularly stand out?
Mostly just running from cops. Boston cops are pretty gnarly. I don’t really know anyone who’s gotten a ticket in Boston; they just send you straight to jail. Anyone who’s spent a good amount of time in Boston knows that it gives you a certain fear of the police, because there are some crazy guys there. They’ll rough you up and send you to jail and make up some bullshit charges. I’ve been arrested without even having a skateboard before.

Really?
Yes. I’ve been walking through skate spots and gotten arrested and spent the night in jail, just because they wanted to make an example of me. They knew my face. Kids were skating all around me and they just snatched me up and brought me to jail.

That’s crazy. So what’s the status of that spot now?
I haven’t been back in a long time. I don’t think it’s as big of a spot as it used to be; I don’t know if skaters go down there every day. I live in NYC now, so it’s been a while.

Tell us about the tour you’re on at the moment.
It’s the Huf Euro Stoops tour. This is our first big trip as the whole team and it’s the first international tri, too. It’s been pretty rad, a lot of street skating. We’re doing an article for Thrasher and making a video out of it.

What has been your favourite stop?
Every city’s got something good about it, you know. It’s hard to say. I would probably say Copenhagen, just because it’s the only city I’d never been to and I had that excitement of being in a new place. At the same time, it really is so rad for skating. They just seem to be really forward thinking and open to new architecture. Some of the stuff you would swear was made for skating, but they must just have a love for geometry and design.

How do you feel about the addition of Dylan Reider and Austyn Gillette to the Huf team?
I think it’s awesome. I’d met both of them before, but never really got a chance to hang out much with them, so this trip was good in that way too, because you’re kind of forced to hang out with each other for a long period of time. They’re both fucking amazing skateboarders; it’s absolutely insane. And good people too.

Are you worried the other riders might get overshadowed by such big names?
Those dudes are definitely high profile and they have their following, but the team is solid and we all mesh really well, so I don’t think so. I think we all have our own niche skate-wise, so I’m not worried about it.

In your eyes, what made Aesthetics so popular? Skaters of a certain age are pretty nostalgic about the company and Ryde or Die Vol. 01 is a classic video.
You know it’s funny, we always knew that we had something special at the time. It just felt right. Me, Kevin Taylor, (John) Igei, Clyde (Singleton) – the whole team – we were just super tight friends, like really, really close. And I think that translated into our skating and into the video and people could just see that it was real. That’s the way I view it. And there were good designers and I think the fact that Sal Barbier was behind it and people knew it, that helped too.

It was short-lived, so that also adds to the nostalgia of it. I’m not saying that if it was still around today, it wouldn’t be as important, but I think the fact that it was so short-lived and it was so good while it was around makes it more special.

What happened to the company?
I think the original thing was money. Although it might have looked really awesome and we had a great following, it was struggling a little bit financially and there was a little bit of tension between owners on the inside. Between those two things, Sal had the opportunity to leave to go to Zoo York. He had a good offer and he basically told us that if we all wanted to go, he would take all of us with him. So we all got on the phone together and none of us wanted to stay without Sal because Sal was a like a fucking brother or a dad to us, so we just decided to go with him. It was the fucking hardest decision in my career as a skater. It was the hardest thing I’ve ever had to do, making that phone call. But at the same time, I just didn’t want to stay without Sal. So we all went to fucking Marc Ecko.

What is Rob Welsh up to these days?
Rob is the inside man at Expedition. I don’t know what the exact title is, but creative director probably best suits what he’s doing. Everything that Expedition is doing these days goes through him or comes from him.

Is he still skating?
Yes, he’s skating all the time. He’s fucking doing it, man. He’s in a really good position and doing a great job. It’s really rad.

Are you still living in Brooklyn?
Yes, going on seven years now. It’s good. New York is a place – like London or any big city – that’s constantly reinventing itself, so it never really gets boring. As soon as you start getting sick of one thing, you can get into another thing. It’s rad; I live a pretty mellow life there.

Is Brooklyn the focus of skating in NYC these days?
No, it’s all over the map. I think a lot of skaters live in Brooklyn now, but skateboarding in NYC is still Manhattan I think. There are rad spots in Brooklyn, but Manhattan’s got the best shit.

Getting a pro shoe must have accelerated your career somewhat. Do you still find time for outdoors pursuits and are you still doing woodwork?
Oh, of course. I’m a man of leisure at heart. I will always find time. I always have to be able to get out in the country and fish and do other things – you know I do woodwork – and I feel that having other passions in life only helps me be more passionate about skateboarding. You’ve got to pull yourself away from things at times to kind of stand back and re-evaluate.

Do you have a website for your woodwork?
Yes, it’s joeypepper.com. It’s just a few projects I’ve been working on lately, some wooden lights and a little bit of furniture. It’s fairly new, just another thing I’m exploring.