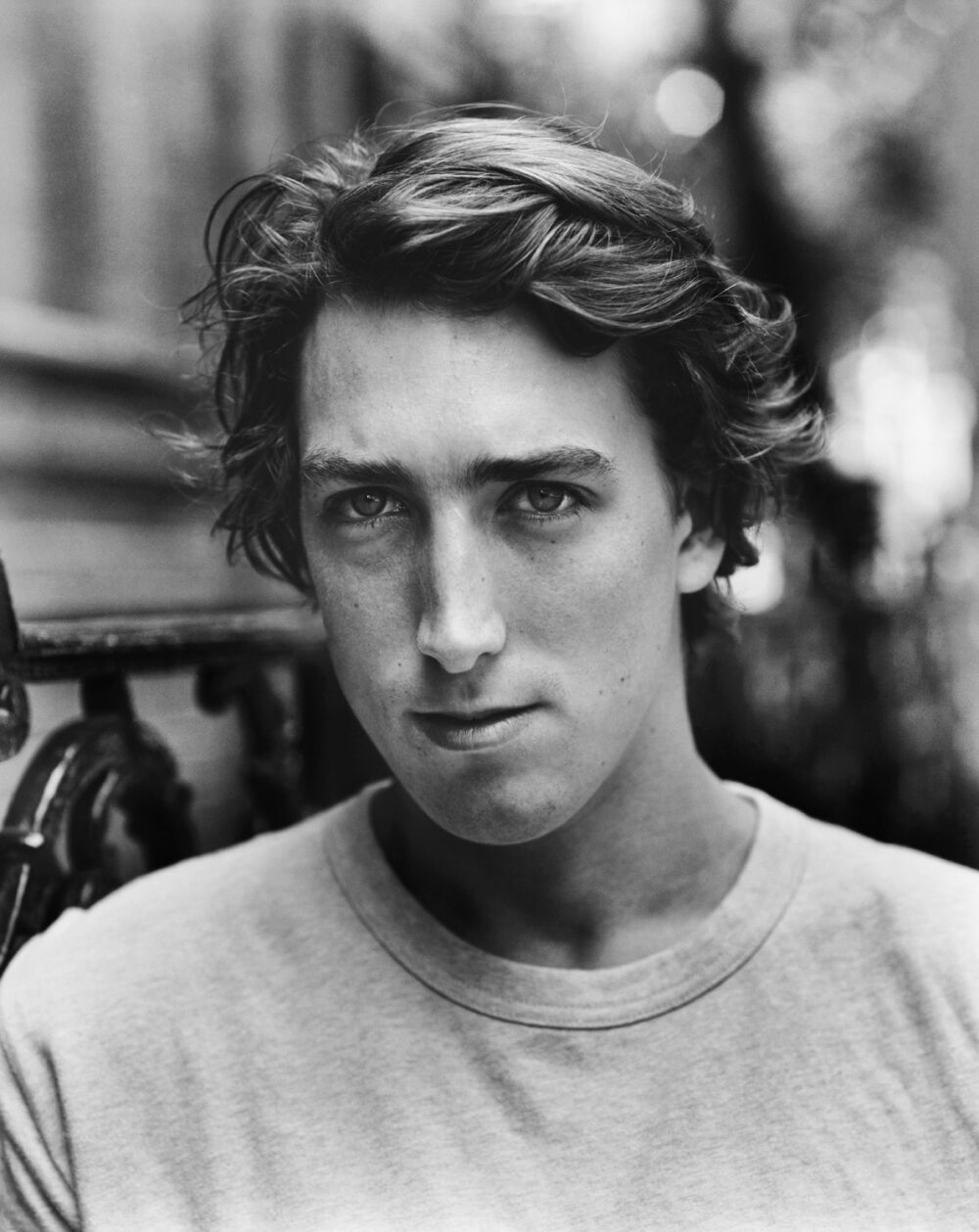 Tell us a little about where you grew up.
I grew up in Wandsworth, near the roundabout (Clockwork Orange banks). Then I moved near Tooting. I’ve always lived in south London and Southbank has been the place I’ve skated most from when I started – when I was 13 – to now.

Tell us about your first sponsor.
I used to skate Playstation (now BaySixty6 skatepark) a bit and I remember Terrence (Anthony) asking me to ride for his company. He was always really nice to me and he offered to give me boards. I don’t know why.

What was the company called?
Sabotage.

And how old were you then?
I think I was about 16. 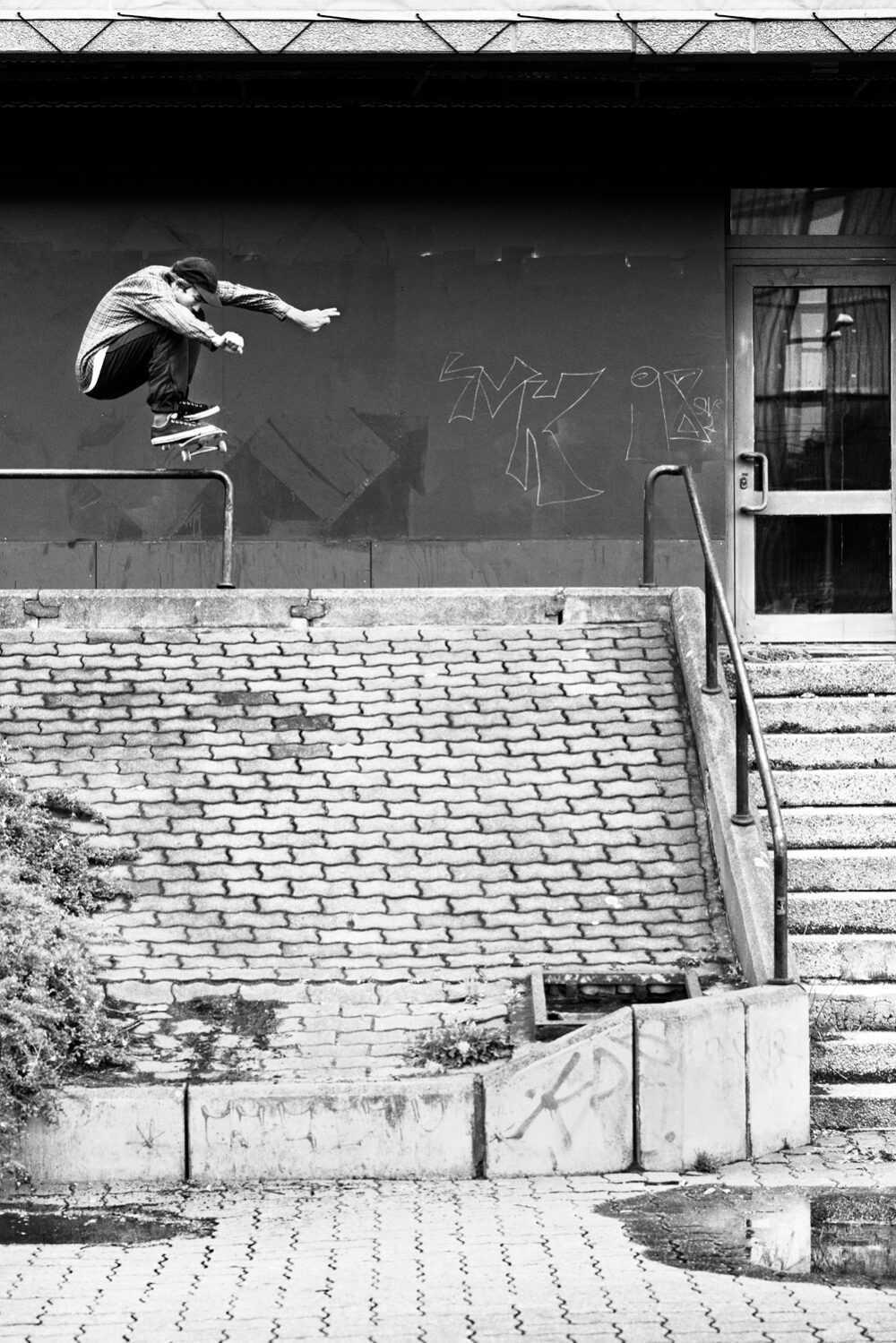 You recently moved into a new flat in a very central London location. Can you tell us about that?
I’ve been moving about in the last three years quite a bit. Before, I lived in Elephant and Castle with Chewy (Cannon), but the landlord wanted to renovate the house, so we had to leave and I wanted to live somewhere nice, you know? I was used to living in central London so I wanted to be in that zone. Then Blondey (McCoy) hit me up and said that there was this house in Covent Garden – a family friend’s – and that it wasn’t that expensive, we could afford it. I went for it and it was a pretty good decision. I’m really, really happy there. It’s an open-plan apartment with one bedroom, but I got a little temporary wall so I’ve got my own room now. It’s like a perfect two-bedroom flat.

Do think living so central will change where you skate?
Yes, it already has. When you’re walking around loads in town – that’s how you get around, walking everywhere – you just find stuff, even stuff you may have seen years ago and forgotten about. You just notice things. And also just being in central London makes you want to skate. You’re more inspired and you’re just on a hype to skate more when you live in town.

You’re kind of a Stockwell local too, right?
Yes, that’s my favourite place. Obviously the skatepark itself is great, but I like the atmosphere there too. There’s a nice mix of people who skate there: old, young, people who are from the area… Southbank’s cool, but it’s lost a little bit of that over the years and Stockwell’s still got that. But I still love Southbank of course, especially recently. I’ve been really enjoying it there. 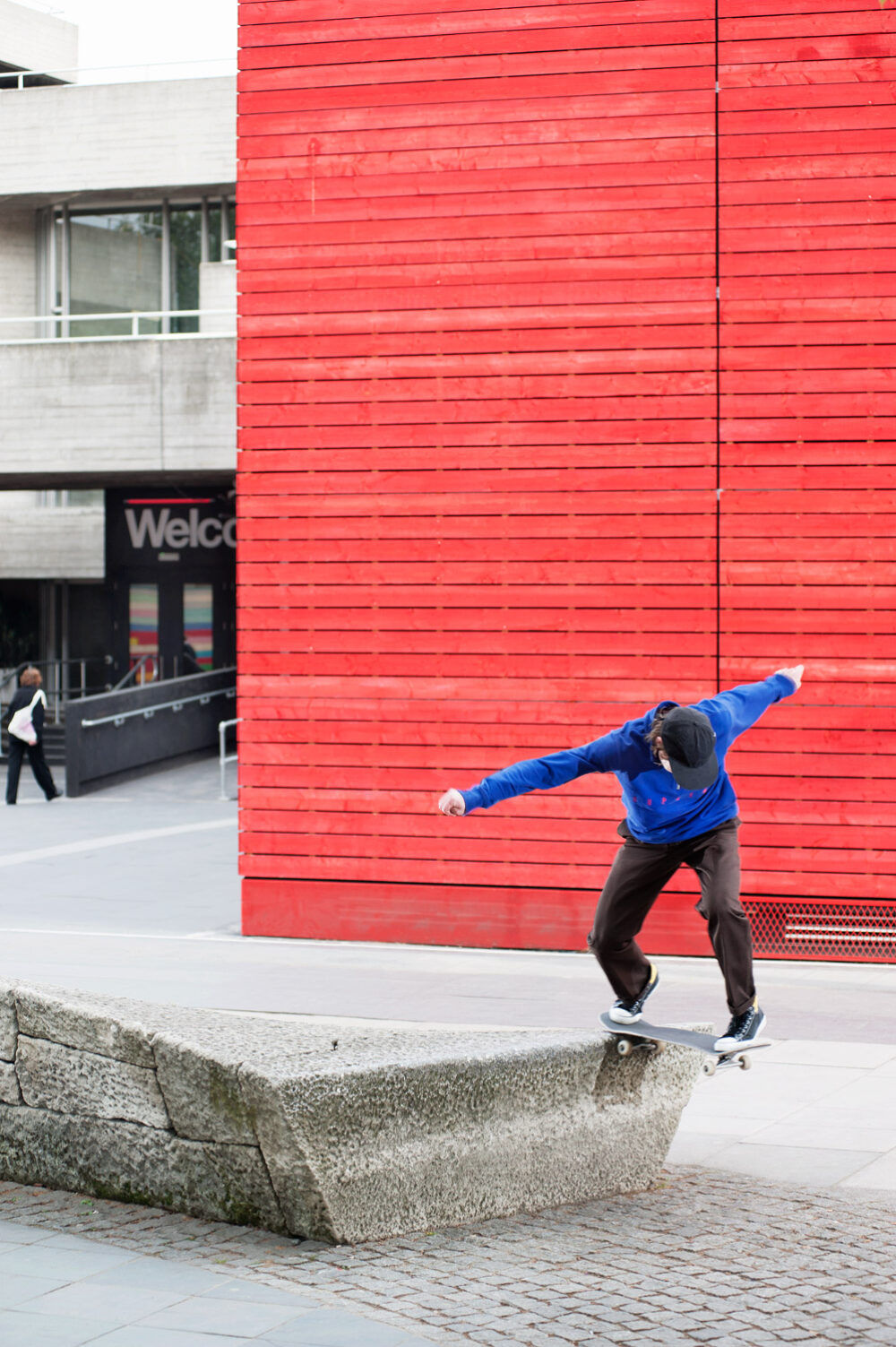 How did you end up working at Supreme? That’s quite a sought-after position.
Jagger (Dan Ball) is the manager and we used to chill a lot, get stoned, listen to records, drink beers, hang out… I also wanted to move out from home and I knew that wasn’t going to happen unless I had a job. One of Nugget’s (Gabriel Pluckrose) mates hit me up about a flat in Vauxhall and that was it, I moved out for the first time, three years ago. I’ve been at Supreme for nearly three years now.

You recently cut your days considerably. What was the motivation for that?
Obviously I’m a sponsored skater and I have to film and stuff but I also like skating, just having fun with my friends and not being able to do that as much wasn’t fun.

So how’s progress with the Palace video? You guys recently got a new team manager and the project seems to have gathered some momentum.
Well, Lev (Tanju) is incredibly busy and obviously he wanted to find someone he could trust to keep things how he wants them and that person was Torey (Goodall). It’s been really good. Torey’s mellow, but he makes shit happen.

Can you tell us a bit about the video?
It will all be shot on VHS and it’s going to be just London footage.

It’s quite hard filming in London, though.
Yes it is, but not when you’ve got people on it, wanting to film every day. Also I’ll go with someone if they want to try a trick. It’s not  all about me and what I want to do. It’s about everyone.

And you’ve got a new filmer, right?
Yes, we’ve got two filmers: Morph (Dane Crook) and Dan (Kreitem), the new guy. Between those two we’ve got a good flow of people coming out. I’m just excited about skating this summer with everyone. It’s been really fun. I’ve actually been enjoying it (filming) so much, rather than not enjoying it.

Have you seen much of the footage?
No, I haven’t seen much of it. There was an enormous amount of tapes that hadn’t been logged but between Dan, Torey and Morph, they’ve all been logged now. 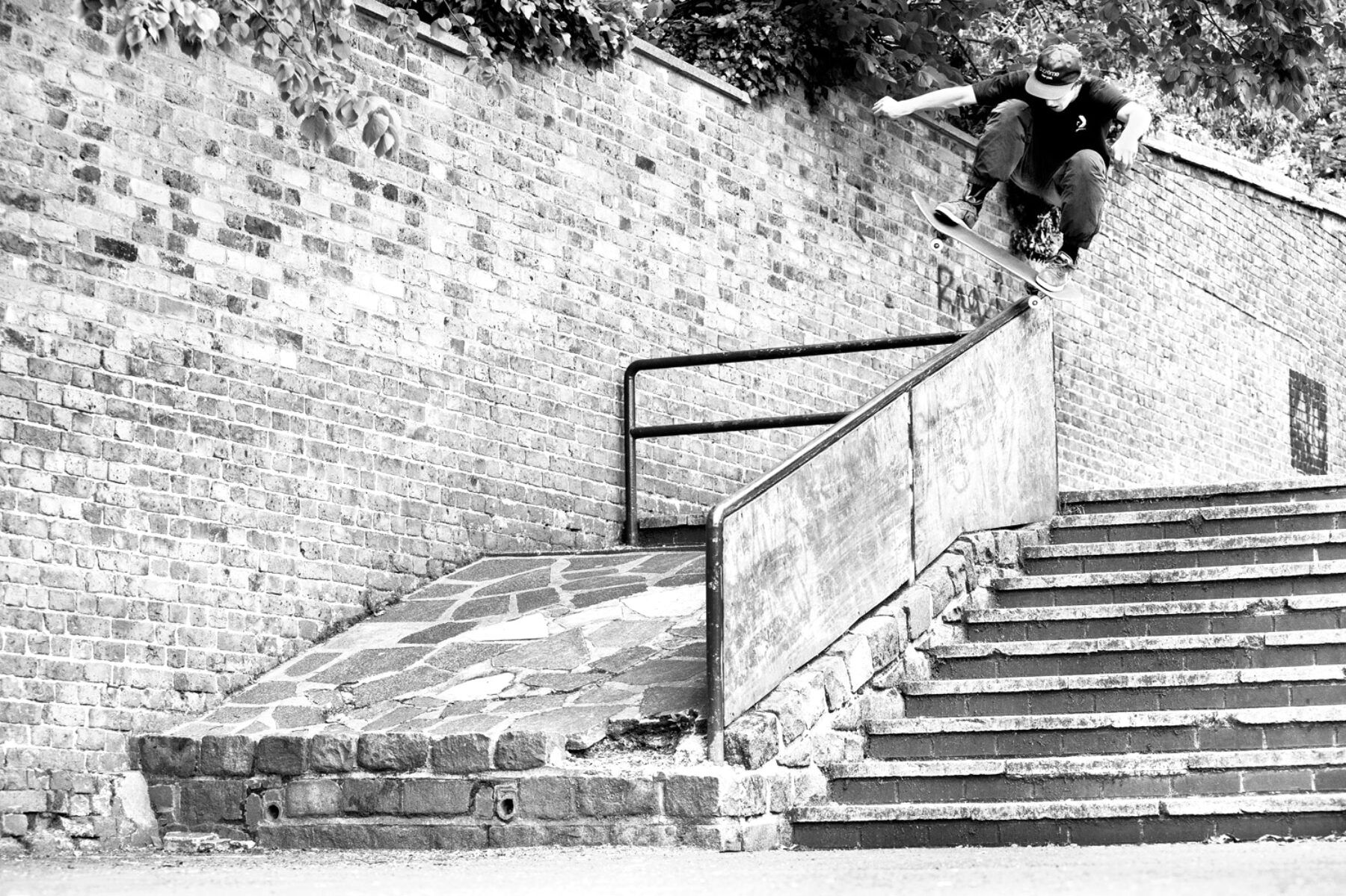 How is your part coming along?
I haven’t seen it, so I don’t know. I think about it a bit, but I just want to keep trying to film and then a bit later on I can look at what I want to use and what I don’t want to use. It’s cool because I’ve got an input there. I think that’s important because nobody wants stuff they’re not happy with in a video. It doesn’t make you feel good.

Tell us about the Palace trip to LA earlier this year.
Well, Baker is distributing Palace in the US now and they were like, “Come over, we’re going to go skating,” but they were quite busy, just like we were. We went skating one day with (Erik) Ellington in an amazing schoolyard. That was wicked.

But the rest of the time you were just out filming and shooting photos.
Yes, Mike O’Meally was showing us around. It was so good having him on board because he just knew the sort of spots we wanted to skate and everyone liked the spots we were shown. Really good street spots…

You stayed in some kind of mansion in Beverly Hills, right?
Yes, we had a nice place and people had their own beds. That just really made everything easier. It was easier to film. You don’t want to be staying in a shitty hostel. It was good being in Beverly Hills too because we weren’t next to the bars, it was away from all that shit. We still got pissed every night at the house, which was fun, but we weren’t in that zone. I know what LA can be like. You always end up at someone’s house until the early hours of the morning. The last time I went, it was more like that. This trip was a lot more chilled.

What’s going to happen with the footage?
We’ve got footage of all the stuff that’s not been filmed in London over the past year or so, and we want to put that into a short video. That should be out soon. 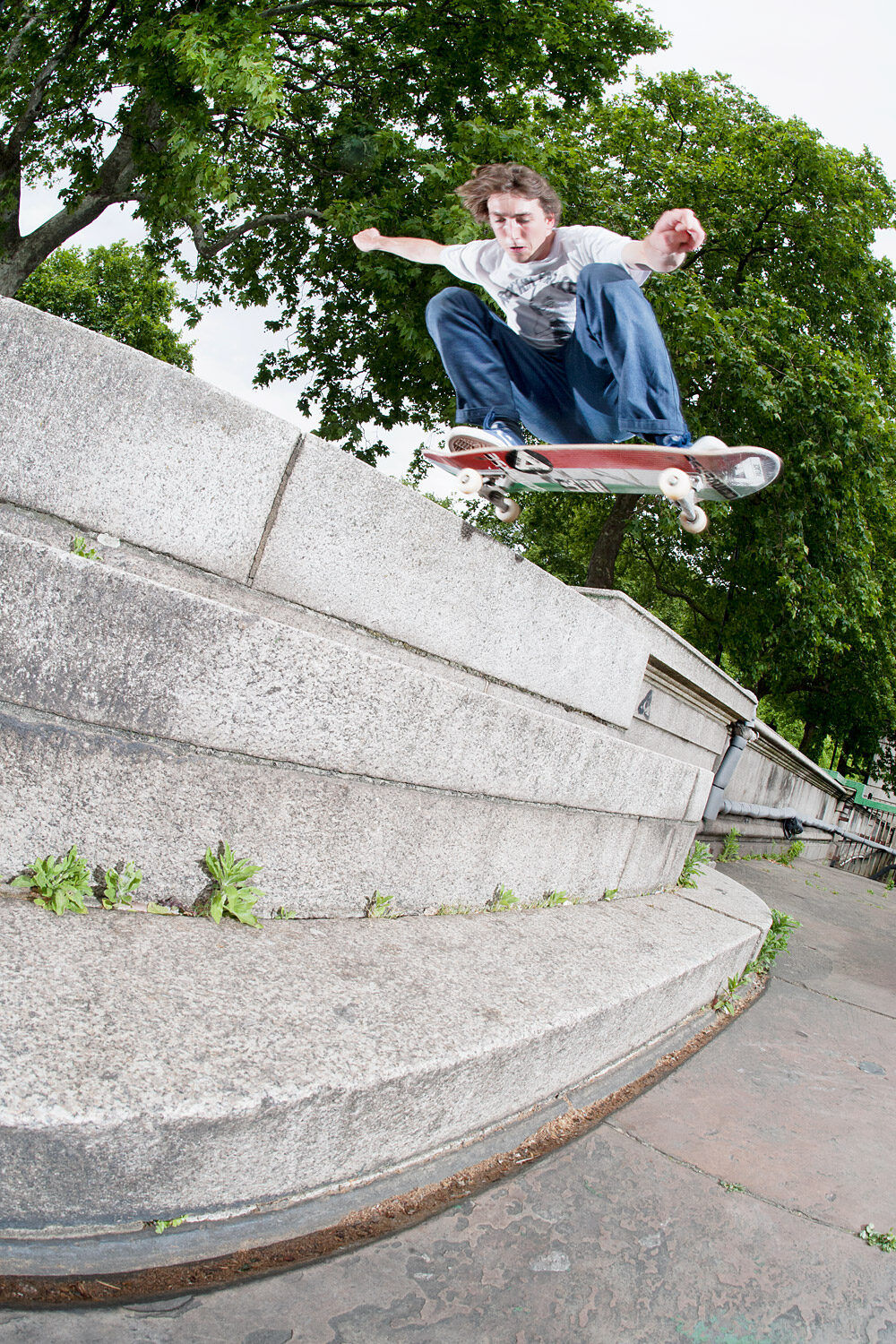 You collect house records. Can you talk a little about how you got into this?
I’ve always been into music since I was young, but I got into dance music from a famous nightclub. It sounds a bit clichéd but it was Berghain (in Berlin). I saw an amazing DJ there called Moodymann and he was playing disco and soul and house records and it was just a new sound to me and it was exciting. But I collect all sorts of music, not just house music. I collect a lot of African records, a lot of rock, all sorts…

What about DJing? You’ve been getting some gigs recently.
I’m only really down to do it if it’s fun. I’m not really trying to play music to people who don’t care. If you’re getting money, that’s cool too, because it’s only a short amount of time you have to do it for and you get paid to do something you like. But ideally I want it to be fun. I want to play music to people who are into it. I’m not trying to play house and techno records to a bunch of skaters. It’s just not fun for me or for them.

You mentioned one musical influence, but what about friends of yours?
We’re all into music. Nugget – who I grew up with – got me into a lot of stuff. We all get each other into shit. And then there’s the older generation like Jagger and Will (Bankhead) and Fergus (Purcell)…

Would you like music to be your career longer-term?
It would be cool because I’m passionate about it, but I don’t think I’m going to be making music… I’d be stoked if I got asked to play for a bit of money every now and again. That would be fun. But skating is what I’m into more. 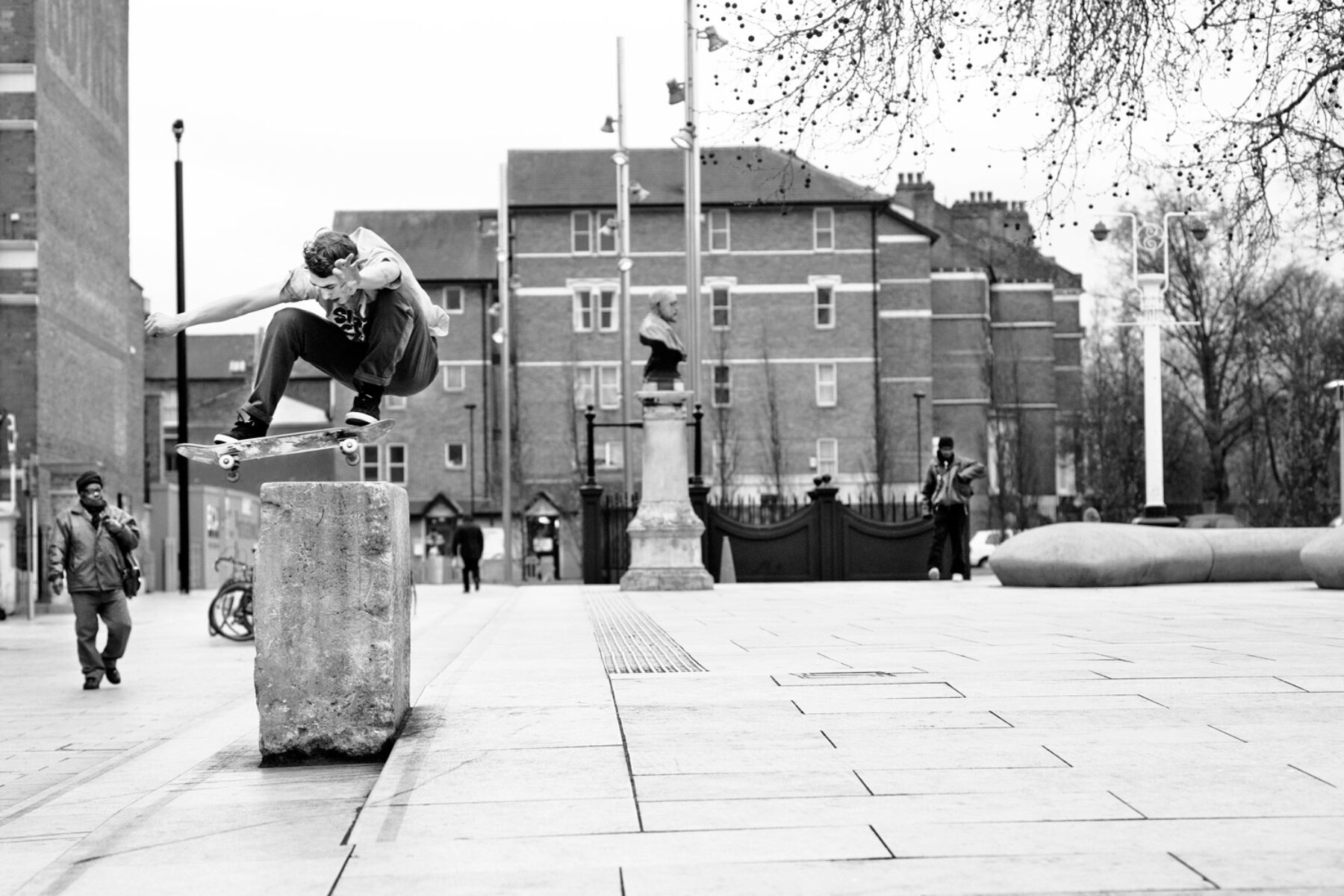 What about going pro? Is this on the cards?
Yes, in 2020 when the Palace video comes out. I can’t wait!

But seriously, is it something that’s meant to happen when the video comes out?
Yes. I’ve just got to try my hardest and make it happen. I’m quite confident about it. I think it’s going to happen soon. Now with this new house and time off work, I’ve got time to skate. As long as I skate loads and don’t get injured, touch wood.