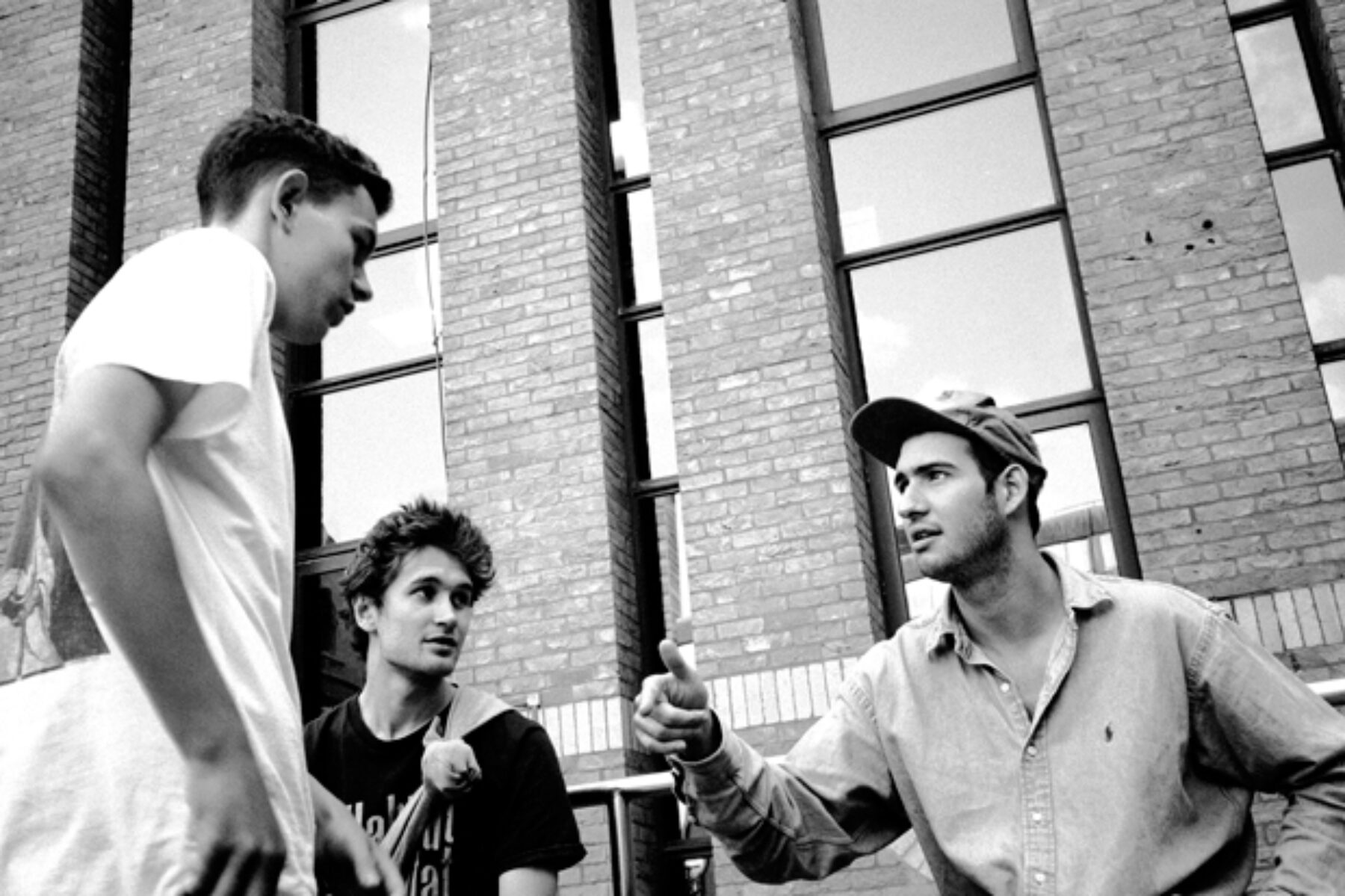 Lev (on the right) and friends in London. Photo Henry Kingsford.

We caught up with Palace founder Lev Tanju to discuss his new clothing line and find out what he has planned for 2011.

How are things going with Palace?
Fantastically! Just been working on our new website and a video thing that drops next month. Chewy Cannon is completely going off. This year we are growing and dropping the real shit.

Why is your clothing more expensive than other skate brands?
Ha ha! Funny you should mention that! I was just directed to a MASSIVE forum thread regarding this subject.

All our new shit just dropped and it’s great but a few people aren’t really feeling the prices. The hoods are £85.00 and that seems to be a real shit-talking point. Everything that Palace makes is our own cut, which we manufacture and produce from overseas and then get shipped here to be hand-screened in London. I personally like really dope things that feel good quality: I don’t want to print onto those blank Gildan tees and hoods that everyone else uses to death. To be completely honest, we really would make more money by printing on these blanks and charging £25 for every t-shirt, but I’m not really trying to do that. I want to have a banging clothing brand alongside the boards. Companies like HUF and Altamont charge a lot for what they make because that’s just how much it costs to make something top quality cut and sew. Cotton prices are also through the roof right now and our shit is HEAVY-weight. On top of that, our factory orders are tiny compared to big companies like Altamont’s, so because we don’t order a lot we have to pay more for each unit.

It kind of pisses me off that people perceive the prices as Palace being greedy. We really don’t make much money off hoods and tees at all. Maybe once we start manufacturing more units we can drop the prices, but at the moment that’s just how much they are because that’s the cheapest we can afford to sell things of that kind of quality. It does kind of hype me up that people are so opinionated about the doings of Palace, but it weirds me out a bit that they’re more interested in viewing something 9,000 times and replying 240 times just to hate on the price of a skate hoody. Compared to 3751 views and 99 responses to a save Bay 66 skatepark petition thread. It’s just a hoody!

I’m really not in this to make a quick buck; I’ve been working 7 days a week on Palace for the best part of 20 months. All money earned goes on really budget VHS cameras and paying the pros. It’s funny to see all those comments but I draw the line at people telling us to go back to our roots when they know nothing about us.

What would you say to a young skateboarder who wants to represent Palace but cannot afford your prices?
1. Email me a sponsor-me tape to [email protected] and if you’re good enough I will send you a load of shit for free.
2. Go to Shoreditch and flying-kick a guy off a fixed-gear bike and rob his Palace gear (just kidding of course. I have NEVER personally seen anyone on a fixed-gear wearing Palace).
3. Save up a bit longer and then spend the whole extra fiver or whatever to support a skate company that’s about real street, has the best graphics and pays the best pros to keep on living the dream, have no real job, smoke weed and have sex with hot girls. Not a lot of the haters know that £1 from every single one of our t-shirt sales goes towards supporting Chewy’s cheese smoking habits.

What proportion of your clothing is sold in skate shops?
At a guess I would say about 97%. We have two stores In London that aren’t skate shops. One is Hideout in Soho, where they sell a lot of stuff like Nike and Supreme and it’s where my homeboy Nugget works. Then there’s Present in the East. Charlie Young works there, it’s a super-nice shop and I used to work for the guy who owns it.

You can be seen out and about wearing some fairly expensive designer clothing.  What are some of favourite non-skate brands?
I don’t know really, I buy a lot of Ralph but a lot of people do. I Bought some Moschino trousers the other day, but I’m from Croydon.

How have these brands influenced Palace clothing?
Not at all really. I think the Sidewalk forum would explode if Palace made some all-over print trousers.

To what extent are you following the Supreme model? Will Palace always be a skate brand?
It’s kind of funny that people compare Palace and Supreme; I have no idea why. I’m certainly not following anything they do, or taking any pages out of their book. I’m just trying to make stuff I want to wear, and keep the team and my friends laced up in high-grade quality shit. Of course we will always be a skate brand, that’s what we are. A tiny percentage of people outside of skateboarding like the stuff we do and that’s fantastic because it helps us support our pros and our world-dominating team.

Who do you look up to in the world of business, skateboarding or otherwise?
I never thought about it. Mainly I guess just some close friends. I like people who are open-minded.

To what extent do you target non-skateboarders with your clothing?
This seems to be another popular misconception in the world of internet shit-talking; the idea we’re aiming our clothes at cool hipsters in a bid to charge more money for it. We just make what we make because it’s the stuff we want to wear. A respected pro skater I’ve known for years even took it upon himself to mention some snide hipster shit about Palace on his Facebook status recently. Some people need to take their heads for a shit and stop being so self righteous. The Bankhead hood graphic for example, was designed by Will Bankhead. I think he was the first person to nosepick the wall at Stockwell about 20 years ago and he runs the game and some douchebag who can work a keyboard in cyberspace is comparing that thing to a Primark graphic and saying it’s just hipster shit? Alien Workshop are making fucking Andy Warhol boards and nobody blinks. Yes I made that Coco t-shirt, maybe that can be seen as hip. But I made it because it was what I wanted to wear. I still think it’s sick and I still wear it. It got good press and and caught a lot of people’s attention and if some jazzy nobheads bought it then thet’s fine by me: our pros got paid on time, and they can concentrate on skating and filming better shit.

Is it necessary for a board company to sell clothing to non-skateboarders in order to support their team riders and produce videos?
I guess so. I’m pretty new to all this. But I mean take a look around you: non-skateboarders wear skate-branded clothing all over the place, all the time, and have done for ages. How am I going to stop that happening with Palace? Why on earth would I want to?

Your clothing has received favourable press in the fashion media and the same fashion-conscious East London types you poked fun at through Global Skateboard News can be seen wearing Palace gear. How does this sit with you?
Oh man, I don’t really think about it. It sits with me kind of like this: ha ha ha ha ha. I’m just trying to grow my company and promote something real that we believe in. skate gang shit: 100% British and skater-owned and run. I can’t sacrifice sales or decide who’s buying it. I like the fact it crosses over to other people anyway. When mad-pretty fashion girls wear the t-shirts it totally stokes me out.

But take Zoo York. Mixtape is my absolute favourite video of all time. Every nobhead who’d ever heard of the X-Games was wearing a Zoo York hood at one point. That doesn’t make me like Mixtape any less.

Do you perceive hostility toward the London scene outside the city?
YES! And people are quick to say shit like Palace don’t give a shit about anything outside the M25 and generally hate anything coming out of London. I flow product to a few kids outside of London, I send extra boards to Lost Art because they’ve got some ghetto little kid who rips. I hook Karim (Bakhtaoui) and Will Ainley up. I run a company by myself that’s a year old. I film, edit, make 90% of the graphics, do sales, pack shops’ orders and write stupid messages on the boxes to the shops I like. I’ve got Toddy back riding for a UK company instead of some Scientology Yank-Wank, Lucien Clarke had been saved from the hell on earth that was Element, so thankfully now we don’t have to watch his footage edited to shit euro reggae, with him sandwiched between Scandinavian blonde guys in Trilby hats and Chewy Cannon has a pro board again and the kids love it and he’s happy.

London is where I’m from; I was born and bred here, so shit is always going to pop off here first. I love it up north, I love it outside the M25 but give me a chance: I can’t even drive yet!

What can we expect from Palace in the near future?
We are working on our killer new video, sorting out some sick fun skate trips and we’re also planning to renovate Kennington bowl for a skate event in the summer that will totally rip and be about the best thing that’s ever happened.

I just want to press on your readers that I honestly, obviously do all this out of a real and real deep love for skateboarding. If you’re into skateboarding, you’re down with us, basically. It’s as simple as that. I’ve been obsessed with this shit forever; I can’t help it. I spent hours on end in an internet cafe making 40 odd episodes of a fuzzy news program just to drum into at least one kid’s head that Kareem Campbell is infinitely better than someone like Ryan Sheckler. Then I got to the stage where I realised that I could start up my own company sponsor my favourite skaters and make something better and realer and streeter than all the rest of the weak shit out there right now. I like nice clothes and I want to make nice clothes. If kids are into Palace then I say skate Palace boards. If they’re not, then don’t. We aren’t going anywhere. Palace is about real street skateboarding and it will be forever and ever and ever amen. There is nothing else.

In conclusion: if you don’t like it lump it.